A total of twelve Sheriff’s Office, County and medical contract employees were directed to self-isolate in their homes after a recent incidentin which they were exposed to a person who later tested positive for COVID-19.

The incident, which occurred on Thursday, March 12, 2020, a civilian Sheriff’s employee who works in a Jail control room and had recently traveled to Europe, became ill at work. This employee, who is a resident of San Luis Obispo County, sought medical attention and subsequently tested positive for COVID-19. Twelve of the employees’ colleagues (four sworn Custody Deputies, one General Services employee, two employees of Wellpath Healthcare and five civilian Sheriff’s employees) who had been in close proximity to the employee, were evaluated by medical staff and determined by Santa Barbara County Public Health authorities to require self-isolation. All of them were asymptomatic and were sent home to self-isolate. Likewise, the employee who tested positive was told by San Luis Obispo County Public Health to self-isolate at home.

In another unrelated incident an attorney, also a resident of San Luis Obispo County, became ill after working in a Santa Maria courtroom last Thursday and later tested positive for COVID-19. In an abundance of caution, his inmate client and another inmate who shared housing with him at the Santa Barbara County Jail were both re-housed into a negative-pressure location. Their initial housing area was thoroughly cleaned and disinfected. Both inmates were and remain asymptomatic; they continue to be monitored by Jail medical staff. Santa Barbara County Public Health authorities were notified of this incident as well. Those who had been present in the courtroom that day, including a Santa Barbara County Sheriff’s Office Sheriff’s Deputy bailiff, were asymptomatic. They were instructed by the Court to seek their own medical evaluation. The Sheriff’s Deputy bailiff did this and was instructed to self-isolate. 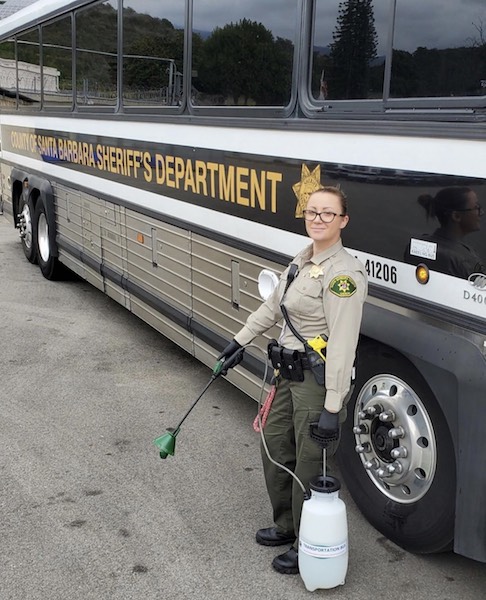 The Santa Barbara County Sheriff’s Office has been diligently monitoring and adhering to local, state, and federal guidance surrounding COVID-19, and is prepared to take appropriate actions to keep our inmate population, staff, and the public safe.

Within the Main Jail, Sheriff’s staff have for several weeks been using the CDC screening model during inmate booking, including asking questions regarding travel, known contact with a positive case, and taking the person’s temperature. They have been instructing inmates and staff on methods to stay healthy, including frequently cleaning commonly touched surfaces, frequent handwashing with soap and water, covering coughs and sneezes, and social distancing when possible. They have increased the frequency of cleanup details throughout the facility and have an inventory of Personal Protection Equipment (PPE) for distribution if we see any suspected or confirmed cases. They have established a plan for isolating inmates who become ill.

Patrol Deputies have been similarly instructed on cleanliness measures and have been provided PPE equipment. Deputies have been directed to exercise discretion when making arrests and are encouraged to attempt to cite suspects who do not pose a threat of violence to the public.

The Sheriff’s Coroner’s Bureau has informed deputies on the protocol for response to any suspected COVID-19 deaths. All inmate housing areas are being regularly cleaned, and inmates have been instructed on cleaning and disinfecting their housing areas.

Lastly, Transportation staff have implemented regular disinfecting of their buses and vans. Vehicles are being cleaned and disinfected at least twice daily, and more often if necessary.

Was he wearing clown make-up?

Not sure what that is all

I really hate it when some

Argh, what a nightmare.

March First Thursday. I am

This it is a first.