Salvage operations have been suspended for weather/safety concerns. The unified command will continue to monitor weather conditions and resume operations when it is safe to do so.  Authorities will remain on scene to enforce the safety zone around the site. 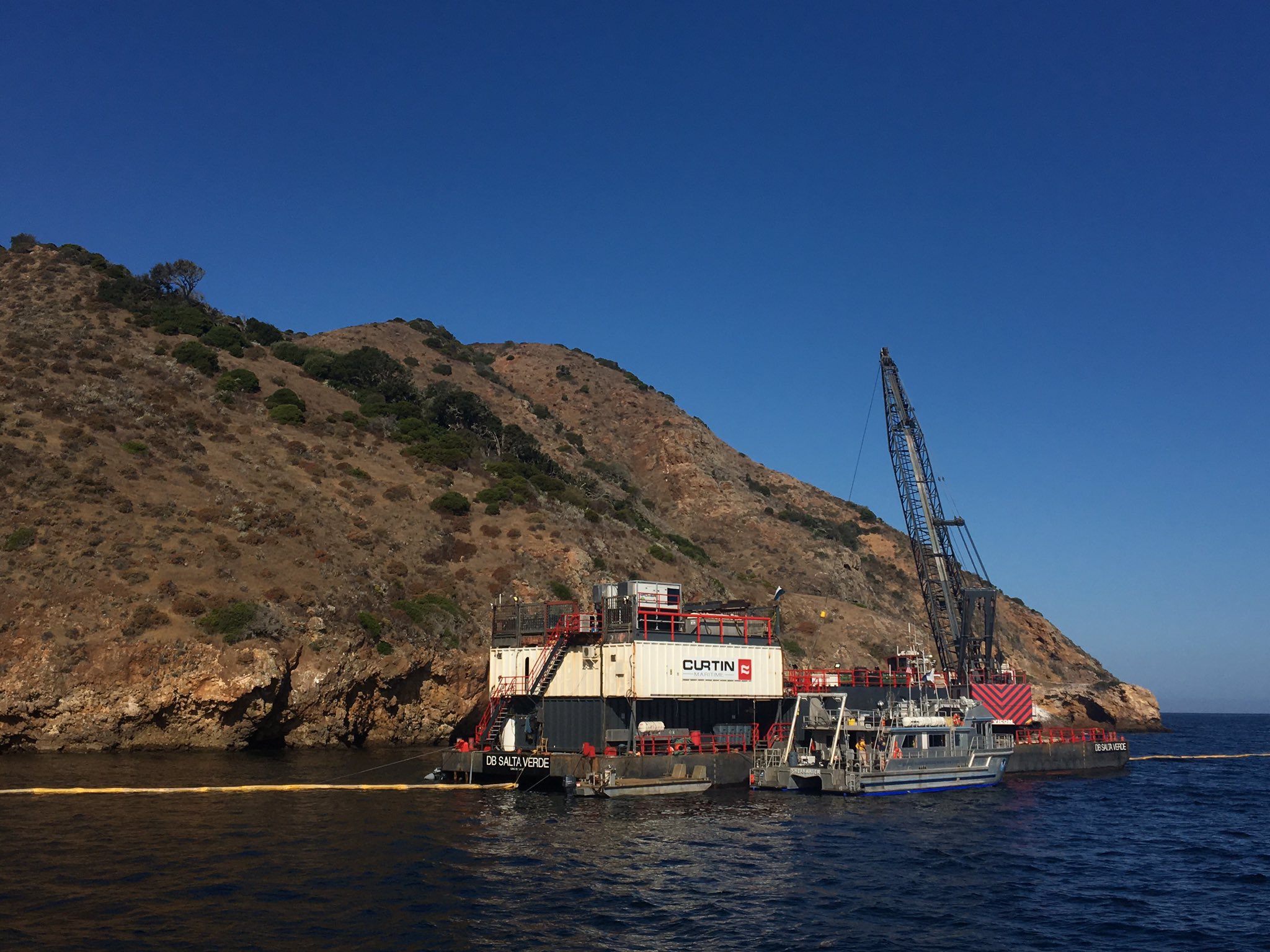 Santa Barbara County Sheriff Bill Brown reports the 34 victims of the Conception boat fire are believed to have died due to smoke inhalation.

During a press conference Friday morning, Brown stated a preliminary autopsy indicated all victims in the sleeping area exhibited signs of smoke inhalation as the primary cause of death. Brown confirmed it appears the victims died prior to coming into contact with the fire.

Brown also stated that since the pathologist is convinced this is the likely cause of death, traditional autopsies will not be carried out. They have conducted external exams and are awaiting toxicology results and the full report has yet to be released. 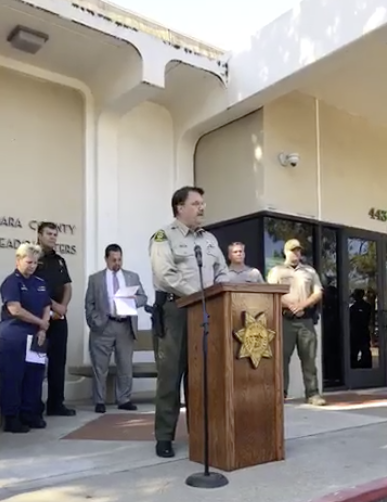 Dive crews are focused on salvage and recovery of the Conception wreckage. They have yet to locate the one missing victim and hope that moving the vessel will grant divers access to previously inaccessible locations. Brown confirmed the Coroner's Office has 33 of the 34 bodies.

Santa Barbara County Fire Chief Mark Hartwig confirmed they will find the cause of this fire stating, "I promised we would leave no stone unturned."

Below are the main highlights from the press conference:

Sheriff Brown stated 18 victims who have been positively identified using Rapid DNA analysis. Of those 18 victims, families for 9 of them have been notified of the positive results and Brown released their names. The other 9 victims names will be released when the families have been contacted.

The identification of the victims are:

Since the 10:00 AM press conference, these additional positive identifications and notifications have been made:

More information about the victims who have been identified by family members and loved ones can be found here.

Sheriff Brown stated the Family Assistance Center was integral to help find and connect family members with investigators to positively identify the victims. The Sheriff's Office has been in touch with family members for every victim including a family in Singapore, another family who recently flew in from India, and the most recent being a mother in Japan.

The derrick barge Salta Verde, which will be used as part of the motor vessel Conception salvage operation, is shown off the coast of Santa Cruz Island Sept. 4, 2019. The Coast Guard Cutter Narwhal and a Long Beach Police Marine Patrol Unit small-boat are also seen in the video. (U.S. Coast Guard video by Petty Officer 1st Class Patrick Kelley)

The Bureau of Alcohol, Tobacco, Firearms and Explosives (ATF) is a federal agency that investigates large and complex fire scenes, among other things. They arrived on scene Monday and a National Response Team (NRT) with experts in varying degrees arrived Friday.

ATF Special Agent in Charge Carlos Canino stated his agency's primary role is to determine the origin and cause of the fire. He said they'll be on scene as long as they're needed and will take their time to process all the evidence. He also cited an "exceptional team" with over 250 years of experience in investigating fires with specialties in forensic mapping, electrical engineering, forensic chemists, and more.

Canino stated it's too early to tell the cause of the fire and it's "imperative I don't speculate or anyone else speculate."

US Coast Guard Captain Monica Rochester confirmed a night watchman is required on this vessel but does not have further information. She stated traditionally the role of a roving watch or Nightwatch is for someone to stay awake and check on the safety of the boat and passengers.

Dive teams from the Unified Command continued recovery efforts for the last missing person from the dive boat Conception Thursday afternoon. Crews are utilizing a wide range of equipment including Remote Operated Vessels and side-scan sonar to assist with search efforts.

Salvage efforts began Thursday afternoon. The owner of the Conception contracted Global Diving and Salvage to conduct the salvage operation and the US Coast Guard will oversee the implementation of the salvage plan. Once the vessel is out of the water, it will be transferred to a crane barge and escorted by law enforcement to a secure location.

Environmental concerns will be mitigated in coordination with National Park Service, National Oceanic and Atmospheric Administration (NOAA) Office of National Marine Sanctuaries, and California Office of Spill Prevention and Response.

Coast Guard and National Transportation Safety Board investigations into the circumstances surrounding the fire and subsequent sinking of the Conception continue.

Captain Rochester stated "salvage operations can take some time. It's an exacting, telling process." Their main goal is to keep the vessel intact for the investigation.

At 2:30 p.m. on September 5, 2019, Santa Barbara County proclaimed a local emergency in response to the Conception dive boat incident. At approximately 3:30 a.m., Monday, September 2, the U.S. Coast Guard and partnering agencies responded to a vessel fire off the north shore of Santa Cruz Island near Platt’s Harbor in Santa Barbara County.

Emergency responders encountered the “Conception,” a 75-foot commercial diving boat based out of the Santa Barbara Harbor, fully engulfed in fire. The vessel sank to the ocean floor at approximately 7:20 a.m.

Proclaiming a local state of emergency is an essential step for local governments dealing with significant incidents. It ensures that all county resources are available for emergency response and supporting activities.

The passenger vessel had 39 passengers aboard, including the crew. As of the signing of the proclamation, there have been 33 confirmed deaths, the underwater search for one person is still ongoing, and the Santa Barbara County Sheriff-Coroner has requested specialized personnel and equipment from outside of the Santa Barbara County Operational Area to assist with the recovery, and timely and compassionate identification of these individuals.

A vigil is planned for Friday at 6:30 p.m. at Chase Palm Park as an opportunity to gather and honor the 34 lives lost.

Toggle Comments (Show)
Sheriff States Conception Victims Died of Smoke Inhalation
A patrolling night watch is a federal requirement. This was a 75 foot boat. A complete circuit of the boat would take perhaps 10 minutes. When was the last time before the fire did a crew member entered the galley and bunk area? Who was supposed to be on patrolling watch? What training did the crew receive in night watch duties? According to Coast Guard Captain Monica Rochester 3 of the 5 surviving crew members admitted to being asleep when the fire started. Where were the other 2 crew members? According to NTSB, all 5 surviving crew members were in the wheel house when the fire was discovered- by a sleeping crew member who was awakened by a noise. Come on, edhat, don't block commenters who are asking questions.
Sheriff States Conception Victims Died of Smoke Inhalation
OK. 75 foot long boat. Perimeter of boat ~ 175 feet. Walking time about 75 seconds at normal pace. Bunk area inspection~ 2 minutes. Salon/galley inspection ~2 minutes. Stern section (including engine room inspection) ~ 2 minutes. Anchor inspection ~ 1 minute. Visit to Wheelhouse ~2 minutes. Total time ~ 11.25 minutes. As far as my experience with dive boats- PADI certified diver on the Golden Doubloon out of San Pedro 1990- 1993.
Sheriff States Conception Victims Died of Smoke Inhalation
Dude, seriously, you have no credibility. Never been on a dive or fishing vessel of this type, eh? But you read about on the internet...or was it one of the other baffled media outlets bent on over-sensationalizing every story? 10 minutes to circuit the boat? Does your half-assed conjecture include 5 minutes in the head? Try this, take your measuring tape and mark out a 75 foot long line. Now get your stopwatch and time how long it takes to walk from one end to the other and back. Will await your results. PS need your definition of "lying" as well.
Sheriff States Conception Victims Died of Smoke Inhalation
When every single passenger dies, and it's not a plane that fell from 35,000 feet, something went seriously wrong. - AB in SB
Sheriff States Conception Victims Died of Smoke Inhalation
Obviously something went wrong... When a plane falls 35,000 ft, something went seriously wrong as well. These are called tragic accidents. I take it you have never had to escape from fire? It’s hard enough to do on land let alone in a confined crowded space. Yes something went wrong. People need to wait until the investigation is complete before making idiotic comments.
Please Login or Register to comment on this.

If someone bags their dog's

They are ignorant, dim,

Gosh, I was hoping there

This is so awful...used to be

Per the San Francisco

Roger, who has been in charge

The City is again pulling the