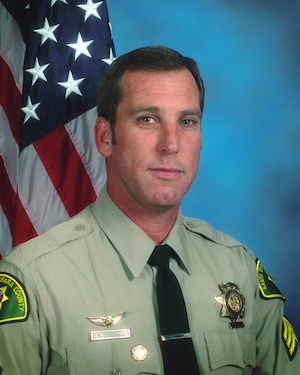 Right after college graduation in 1983, Sgt. Weitzman was sworn in as Sheriff’s deputy and started taking flying lessons. He worked a number of different assignments in the early years of his career, including patrol, the Dive Team, Transportation Unit, the Special Enforcement Team (during which time he helped protect President Ronald Rea gan at his ranch). He was a detective and the Senior Deputy in Carpinteria after the Sheriff’s Office took over providing law enforcement services for the city. Even while working on these various assignments, Sgt. Weitzman never lost his desire to create an air unit for Santa Barbara County. He spent eight years researching how to make this dream a reality.

In 1993, newly-elected Sheriff Jim Thomas, who supported his vision, assigned Sgt. Weitzman to Special Operations full time in order to continue his work on a proposed new helicopter unit. His marching orders were to figure out a way to fund this important endeavor. Through the Department of Defense’s military surplus 1208 program, now the 1033 program, he was able to acquire four aircraft, two of which needed to be built into flyable condition. The Sheriff’s Office used funding from asset forfeitures and the Sheriff’s Council to pay for work needed to get the aircraft up and running.

In 1996, Sgt. Weitzman was assigned as the first helicopter pilot for the new Air Support Unit. He worked on many incidents, including locating a car full of inmates from the Lompoc Bank homicide who had escaped from jail. He participated in more than 300 rescues in Santa Barbara County’s backcountry in the first eight years of the unit’s existence.

In 2003, Sgt. Weiztman was promoted to Sergeant and took a hiatus from Air Support to work other assignments. which included patrol, detectives, property and evidence and the Coroner’s Bureau. In 2009, he returned to Air Support as the Unit Manager/Sgt./Pilot and continued in that role in 2012 when the Sheriff’s Office and Santa Barbara County Fire Department merged to form a joint Sheriff/Fire Air Support Unit.

During his career, Sgt. Weitzman logged 5,950 hours of accident-free flying time in both helicopters and fixed wing aircraft, almost all of that time he was serving the citizens of Santa Barbara County. He has received more than 150 letters of commendation and was named deputy of the year in 1999. Sgt. Weitzman is also the recipient of two H. Thomas Guerry Awards for Valor for nighttime flying incidents involving dangerous conditions.

Sgt. Weitzman is a flight instructor for both helicopters and airplanes as well as an advanced ground instructor and FAA certified NVG Instructor Pilot. He has spent the past 16 years as an Airborne Law Enforcement Association board member and is currently the group’s CFO/Treasurer. Sgt. Weitzman also is the co-founder of Project: Rescue Flight, which has raised more than three million dollars to help rebuild rescue aircraft for the county and related equipment costs.
Sgt. Weitzman said while he feels the time is right to retire, he is grateful for the career he has had. He said, “I was able to put together a unit that we could be proud of and also at the same time was able to do something that I loved.”

Sgt. Weitzman is on medical leave due to a back injury and plans to retire early in the New Year.

Sheriff Brown said, “We are sorry to see such a knowledgeable and experienced member of the Sheriff’s Office retire, but appreciate Gregg’s long-standing efforts to provide public safety air support to the people of Santa Barbara County. I wish him well in all future endeavors.”

There are articles discussing

We were keeping watch on E.

Oops. Did I just type in

REX, Someone was pulling your

This is the first time in our

What are your thoughts if one

Me too, in San Roque. Quiet