As with Red Rock, Three Pools Above Seven Falls is a fun but challenging hike to lead and I was grateful to Sierra Club Outings Chair Alejandro for leading a Sierra Club hike there. Here are my videos and many photos.

There is a connection between Red Rock and Seven Falls. The 2005 floods wiped out access to Red Rock on Paradise Road for an extended period. Young people seeking daredevil adventures discovered the Seven Falls area as an alternative. As a result, it was rather "loved to death" after that.

Here I posed with my hiking and unicycling friend Danielle above the start of the Seven Falls. The overlook rock we were standing on marks a fork in the trail. One fork leads to Seven Falls. The other fork, in the direction we are facing, leads up to Arlington Peak. 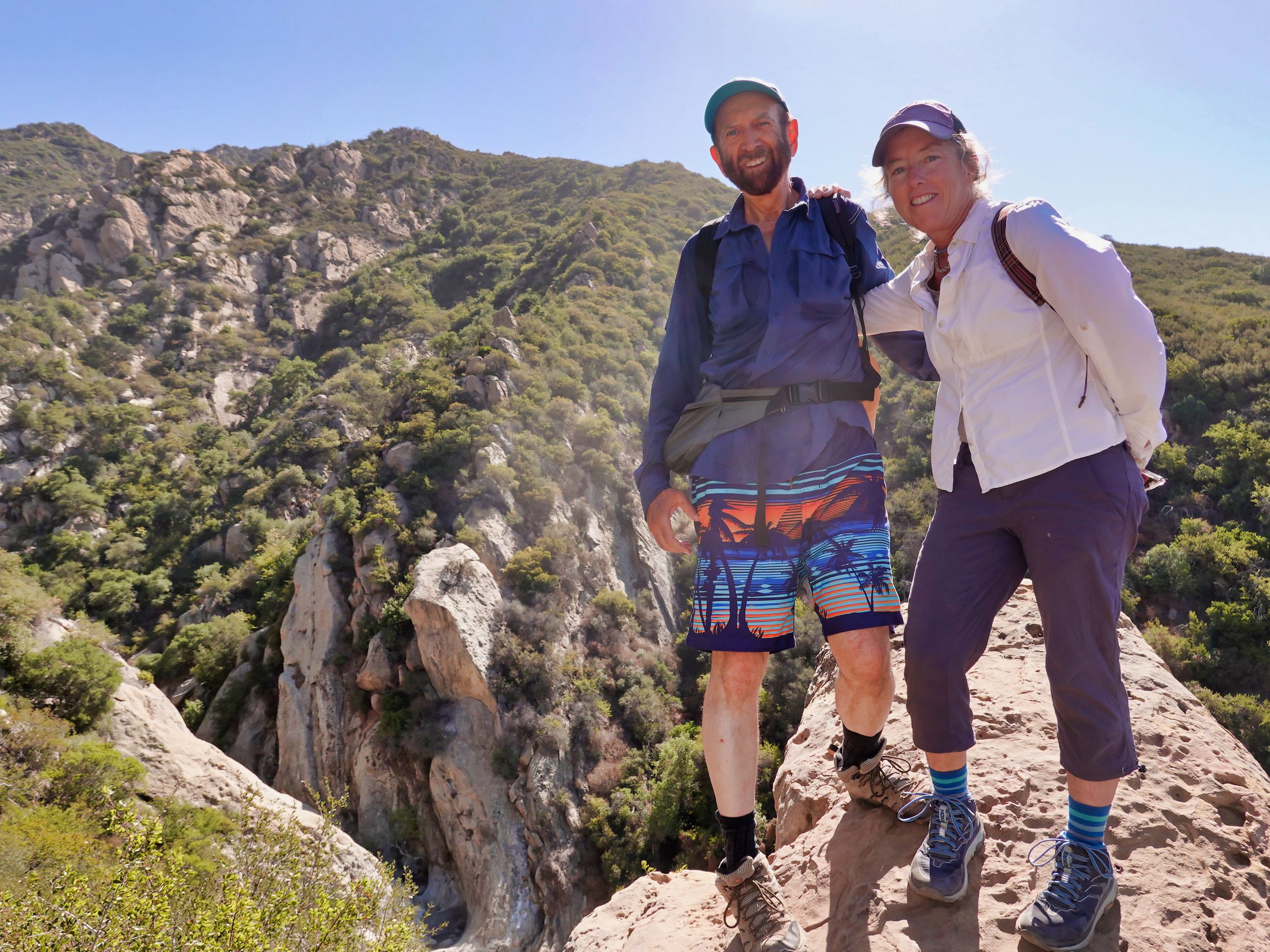 Soon after that overlook comes the biggest challenge of this hike: What I call the Scary Rock. Back in the 1990s and earlier it was not too difficult to climb. But so many thousands of people came after 2005 that the hand and footholds were worn smooth. Some kind volunteers have chipped new hand and footholds into the rock, but it is still a challenge. It is best to have a companion to guide you.

Here our hike leader Alejandro led the way. Followed by fellow unicyclist Philip who is quite adventurous and fearless! 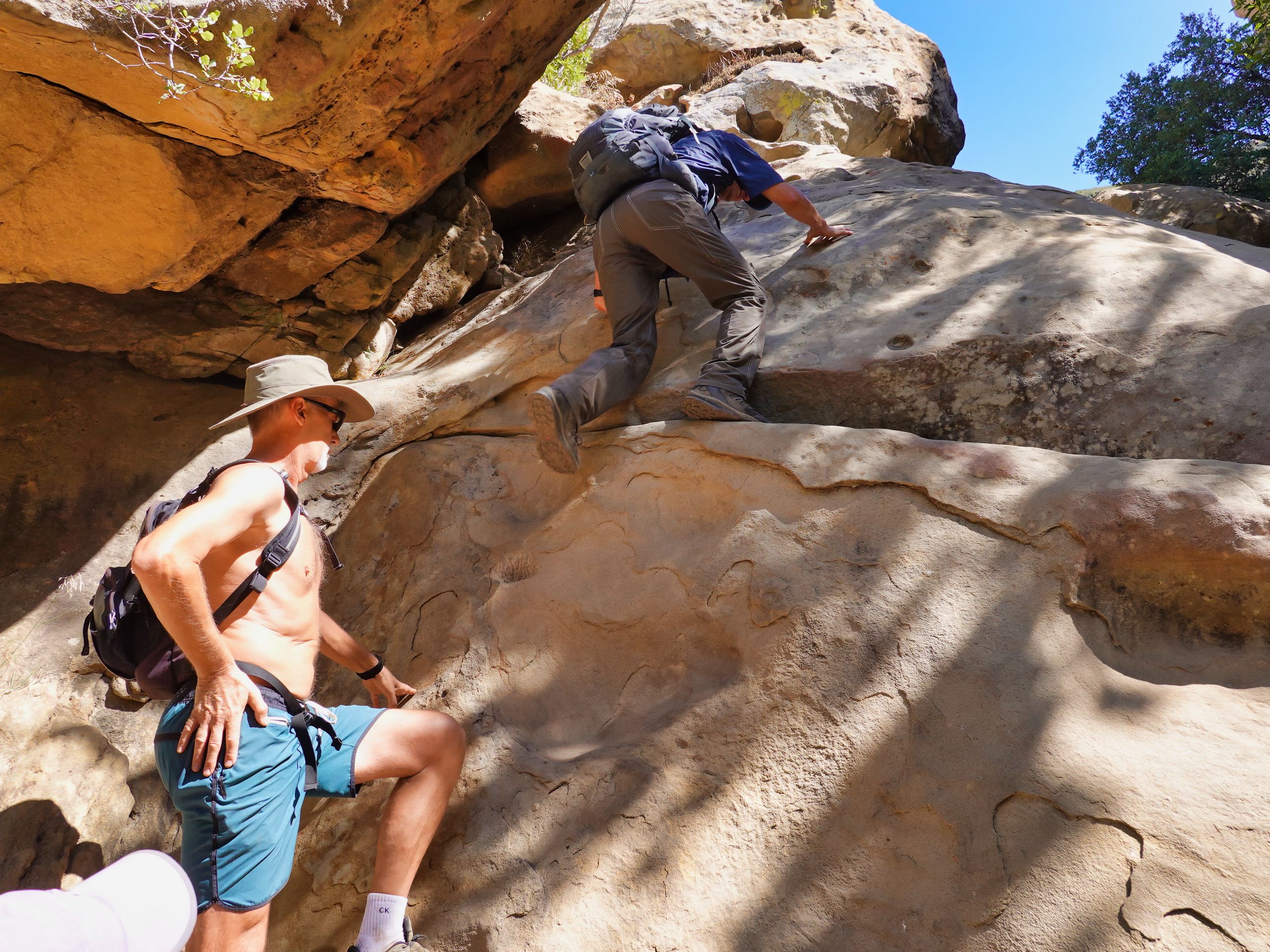 Here Danielle makes the scary climb up the Scary Rock, but she thought it was no big deal! She even gave me a hand as I followed her up.

Here was the view from above the Scary Rock, looking back down: 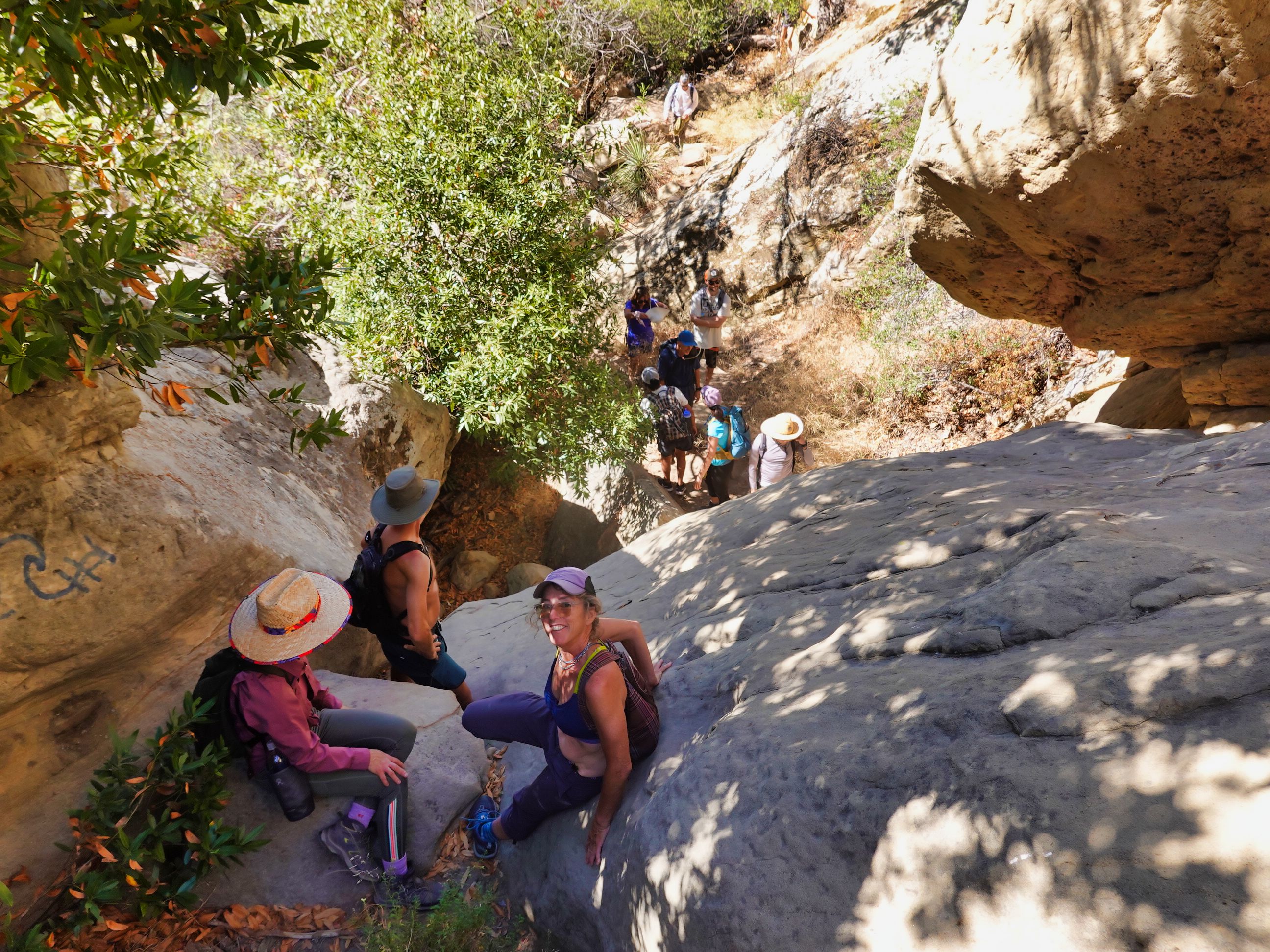 Of course, the "Seven Falls" were not really falls! More like this: 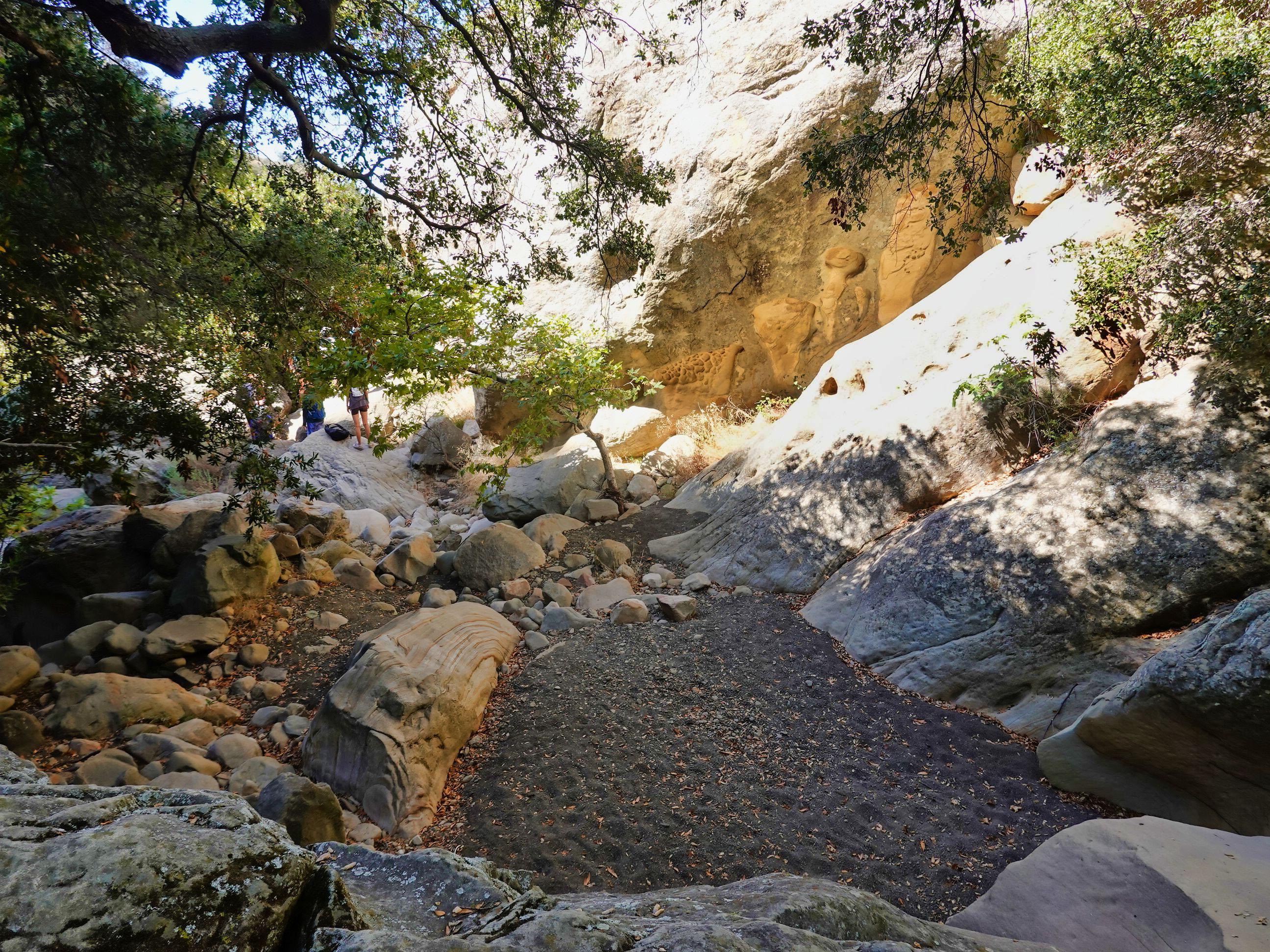 Lots of rock hopping and beautiful rock formations. Here was one similar to what we see at Lizard's Mouth. 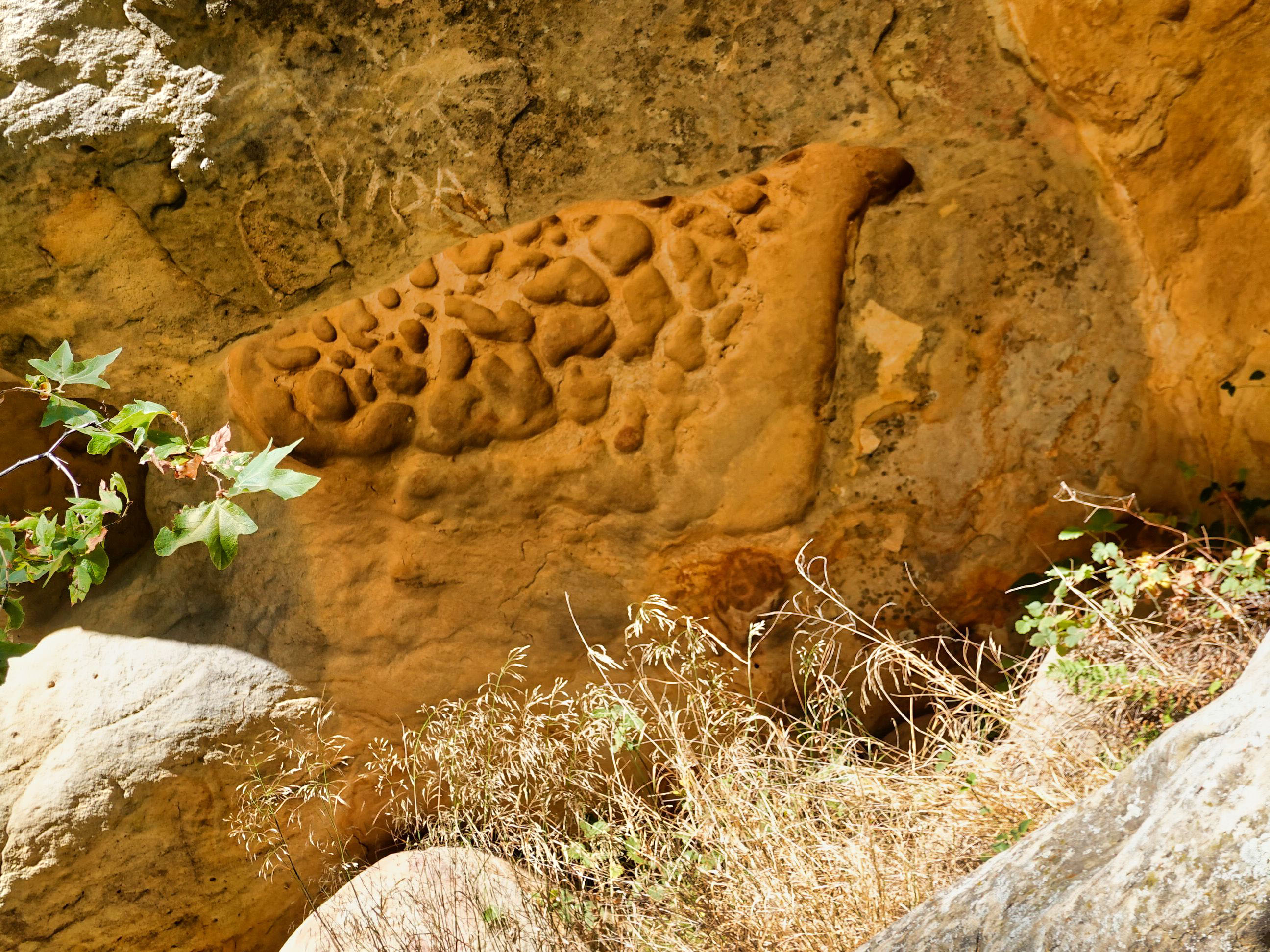 This was cool, too. 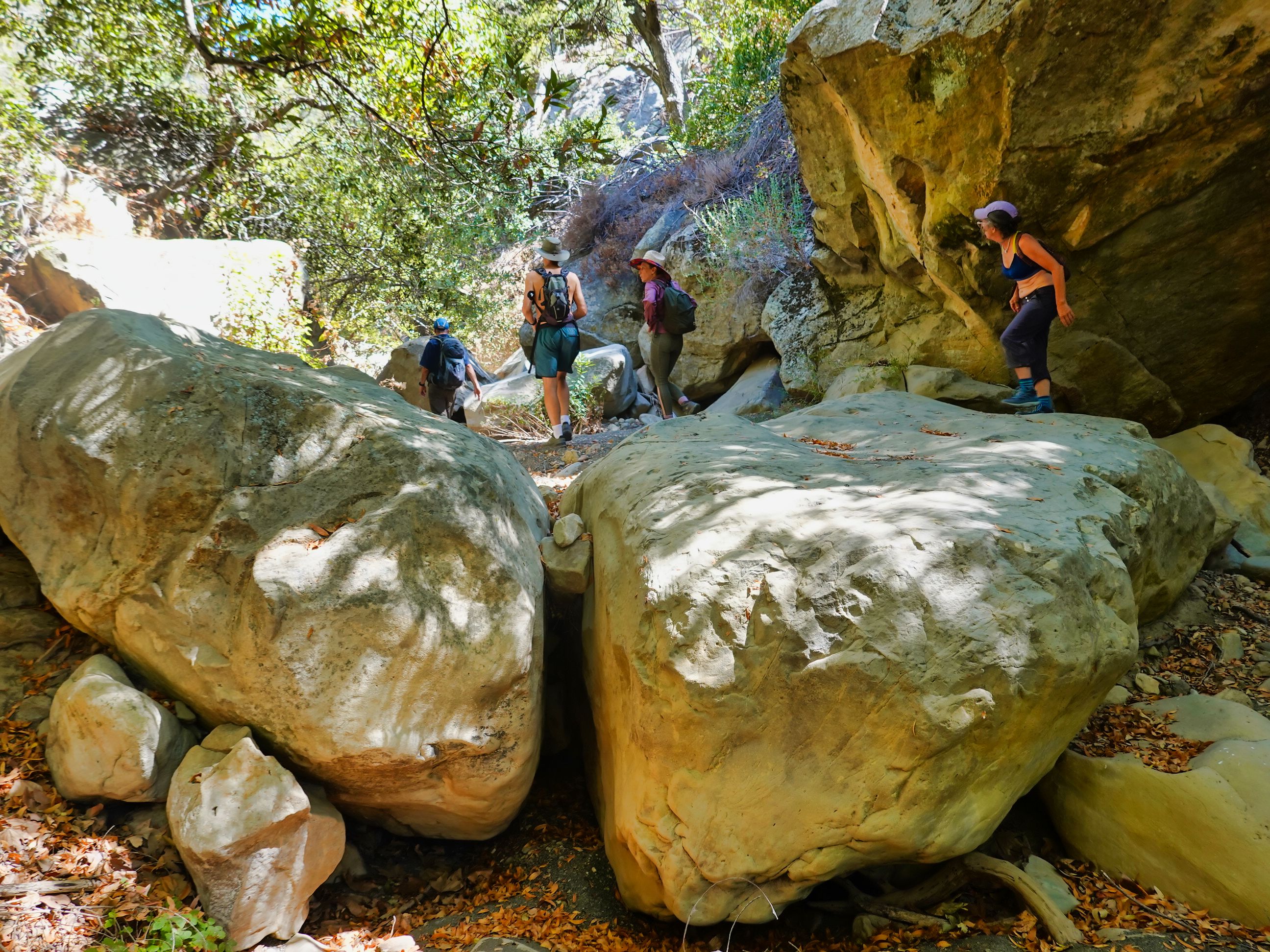 And some of the rocks have fossils of sea shells from when this was under the ocean. 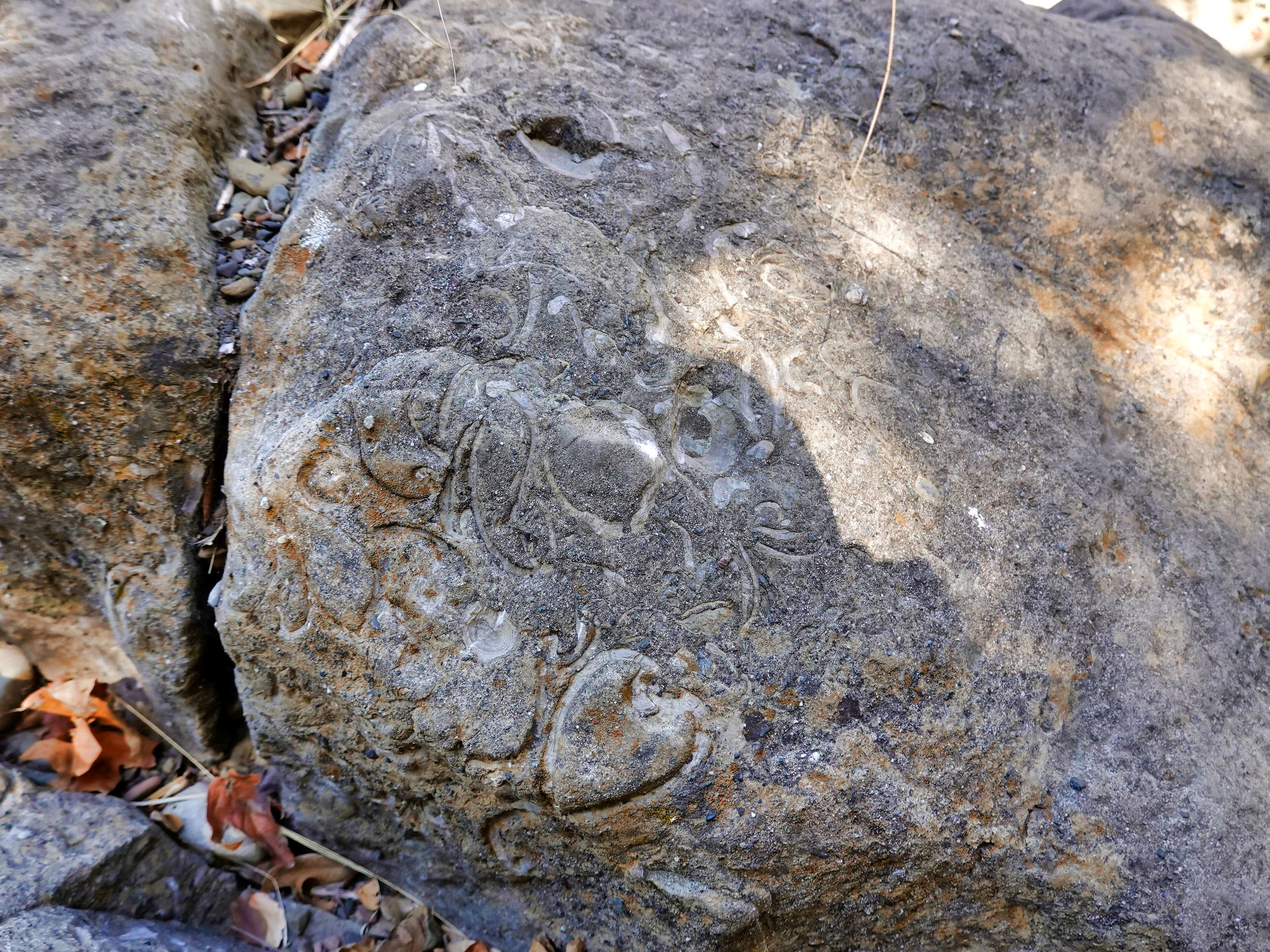 This is the first of the pools above Seven Falls. It is easy to mistake this for the "real one" that was our destination. Not much of a pool! 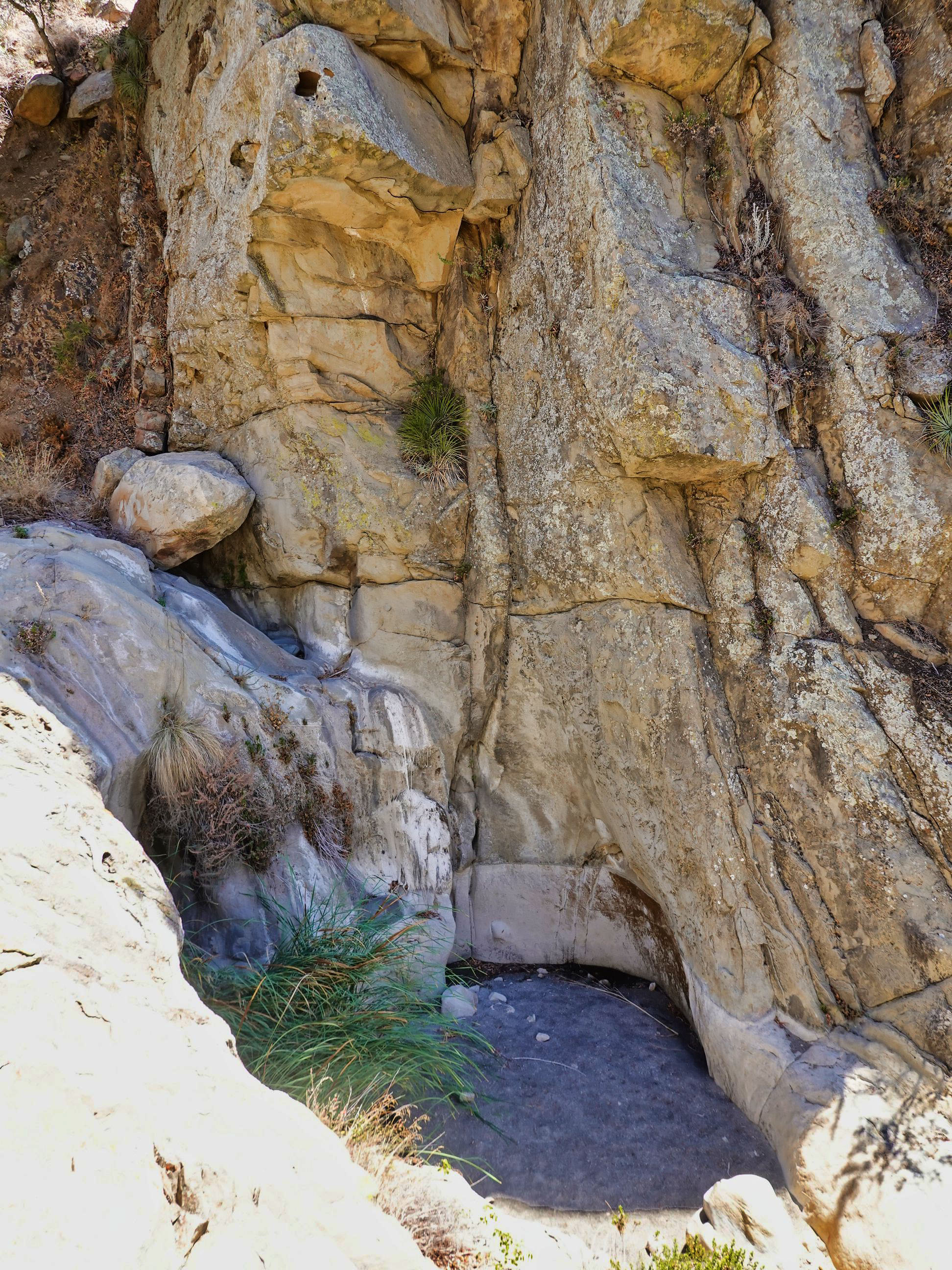 Above that pool is another Scary Rock. Fearless Hiromi was leading the way in this photo. 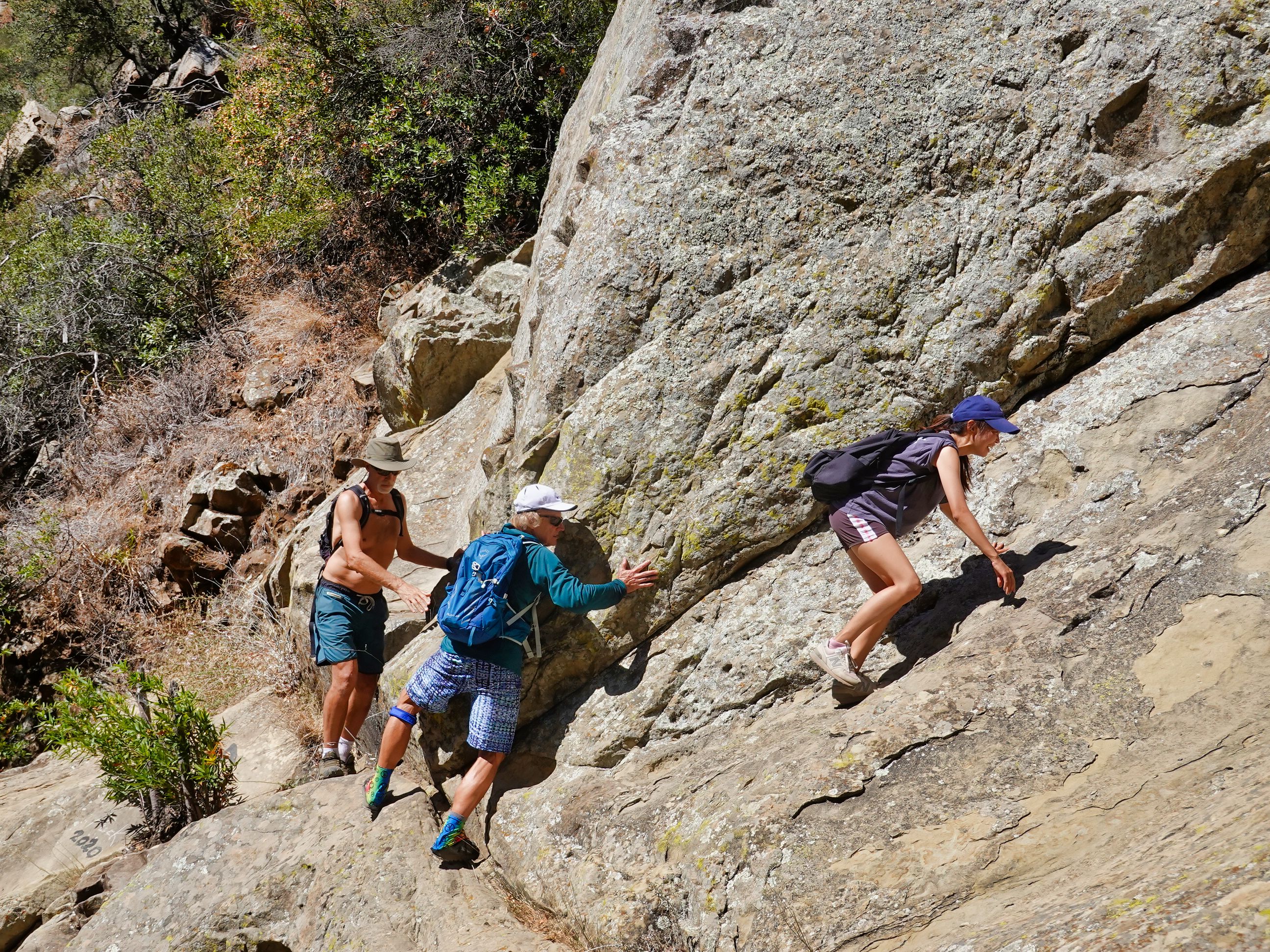 Is this rock mocking us? 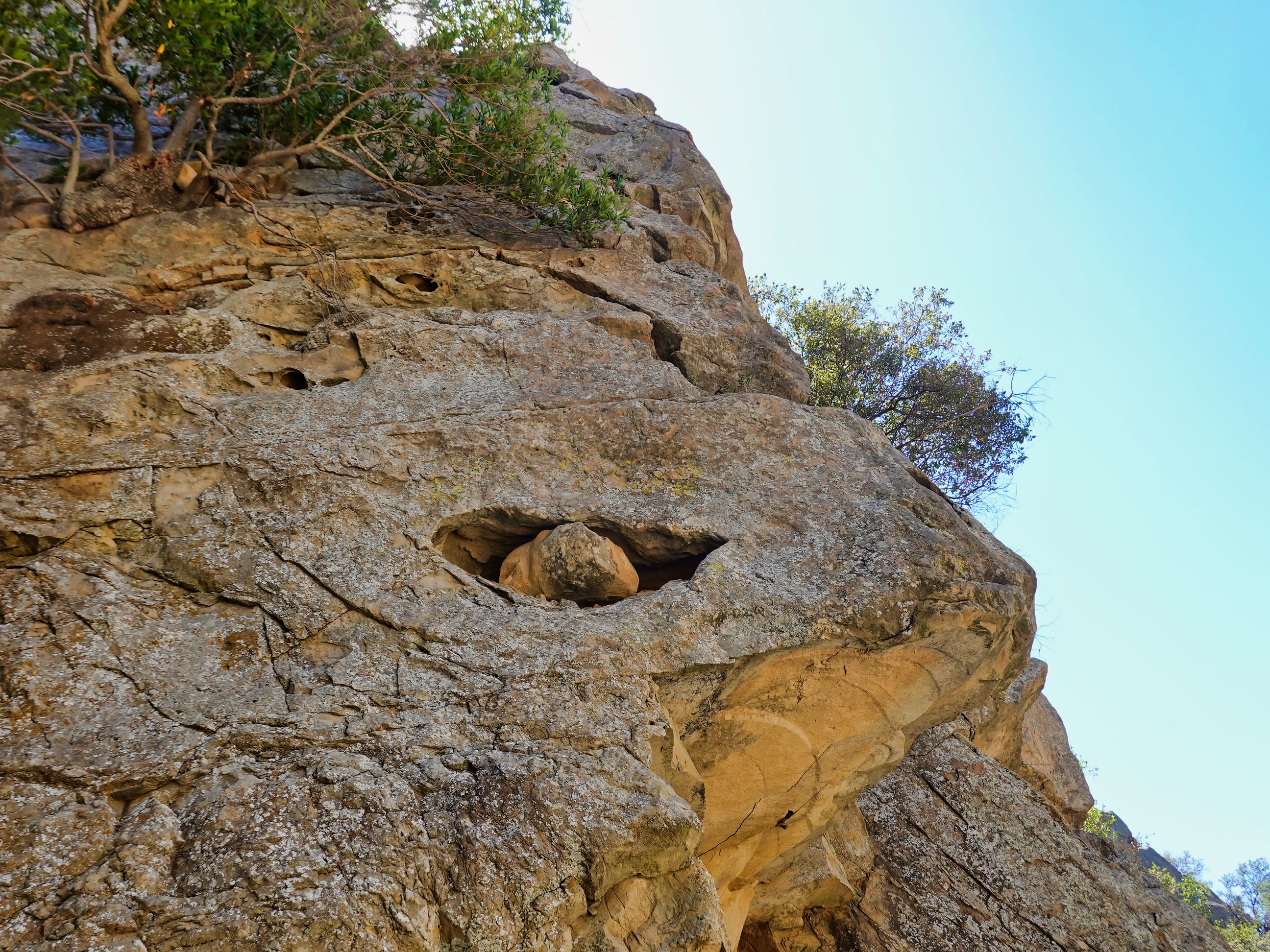 After that it was just a bit further to the famous Water Slide Pool. So deep that you can jump from the top. But not now! There was enough water in the slide. But the pool had filled with gravel and silt. So, no way safely to slide or jump in. Argh! 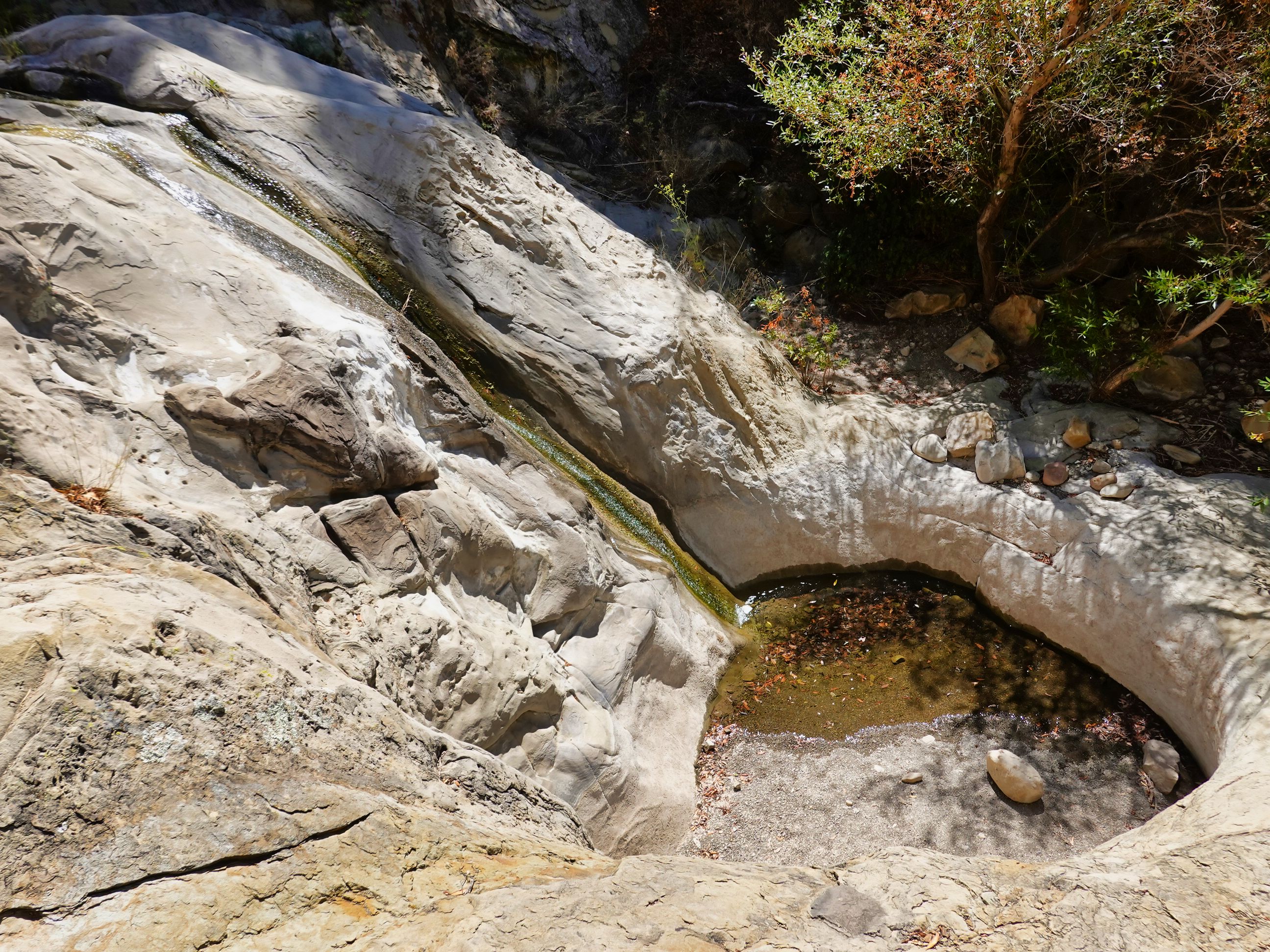 Alejandro vowed that he would return and dig out the gravel and silt so that the pool can fill with water once again. It would mean moving multiple tons of material. Alejandro is a strong guy, so I am betting on him pulling it off! He led the hike a year earlier and said it was all good back then. I had not been there since 2013.

Here I posed at the pool above that pool. 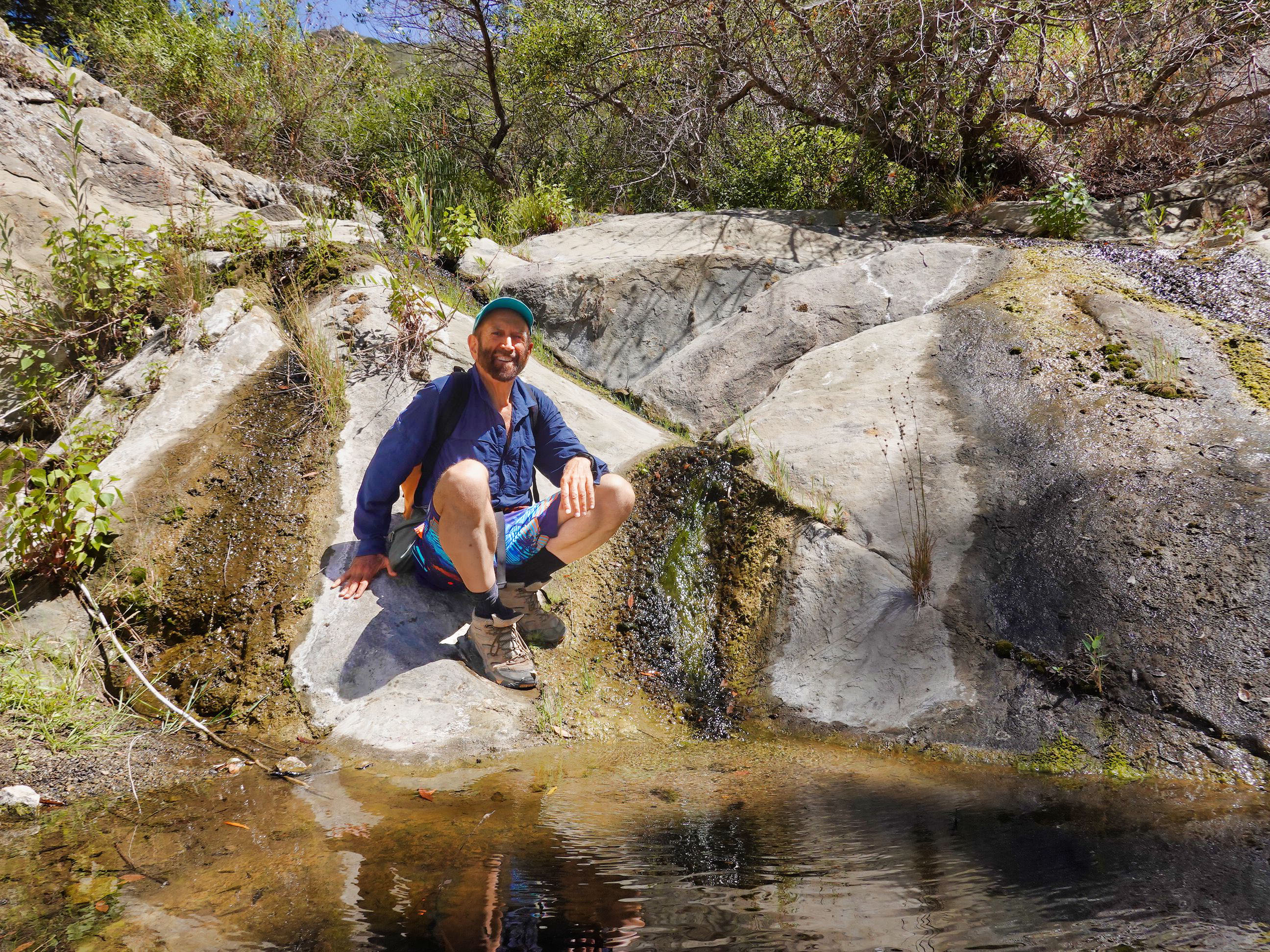 Danielle and fellow hiker Michelle found four newts in those pools and carefully lifted them up for closer inspection. 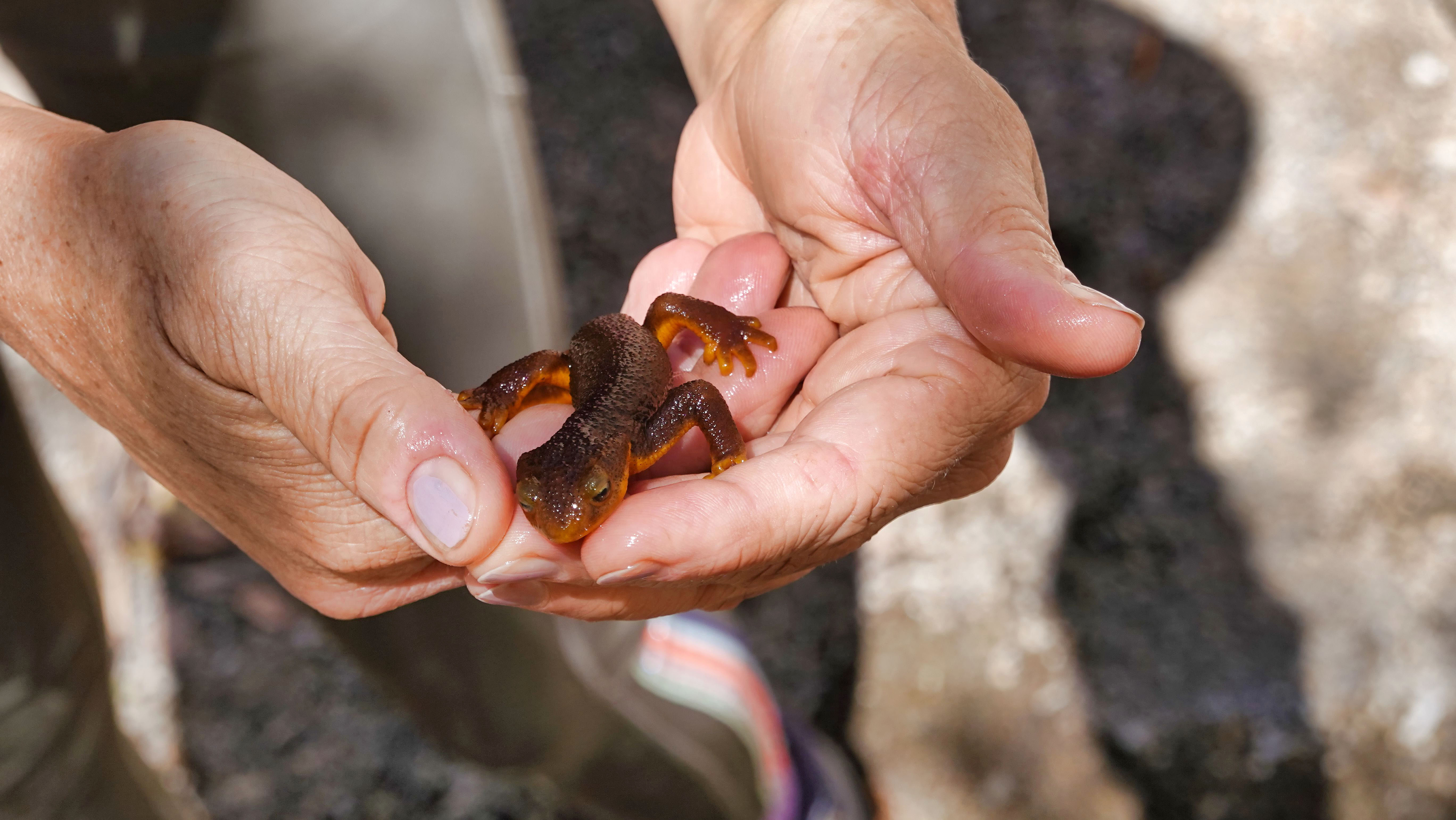 On the way back down, fellow hiker Mike and I scouted another way down the Scary Rock. Still scary, but not as much of a drop if something goes wrong!

The total hike was only about four and a half miles, but we felt like we had hiked ten miles!

You can see the schedule of all of our local Sierra Club Santa Barbara Group hikes through Meetup here. Everyone is welcome! If you are a member of Meetup you can receive free notifications of future hikes!

Thank you for sharing your experience! How long were you actually out on the hike itself?

We were out about four hours, from about 9:30AM to about 1:30PM. Thank you for the kind words MRSDAYSIE and thank you for asking!

Thank you! Love the pic of the shell fossils in the rock.
I’ve never been able to venture out on such hikes, so this is especially great to see your various views and moments!

Thank you for the share! Now would be an excellent time to shovel out the pebbles and silt that have filled those pools. Back in the day people did this and some of the pools were 8 feet deep. To have that stamina and drive! Hope someone chooses to for the many to enjoy.

Thanks, Robert. This brought back some memories (before I became a codger). Getting to the top of Scary Rock was always a relief, as was getting down again. Having someone alert you to where the handholds and footholds were, was a big help!

The text says people chipped hand and foot holes in "Scary Rock". Do not do this, leave the rock alone, in a natural state. Please. Same advice to people who paint etc. graffiti onto rock. Leave them alone, volunteers have to clean up your mess and disrespect to the outdoors.
Condor John

Thousands of hands and feet have already altered the rock from its "natural state". The hand and foot holds were meant to restore it to its previous state. Or are you saying no one should do this hike anymore?

LEAVE NO TRACE
This place has been “loved to death” since I first was there in the seventies. Articles like this are part of the reason. I don’t go there but once a year or so now, but 2-3 times a week when I lived by the mission and could reach the top pool in 45 minutes from th. The things I’ve seen, the trash I’ve packed. The pampas grass I’ve eradicated(still a clump needs removal). , the gravel I’ve shoveled. There’s about 4+ Cubic yards of gravel in there when it was nearly brim full. Took me a full day to clean it out including siphoning the water out. Don’t forget a way to get out when you’re at the bottom! Or pray for a gullywasher to clean it out this winter. It’s happened before.
PS that’s the second lowest flow I’ve ever seen over 40 something years.
PPS Natural state or pre-human state? Humans are naturally good at making their mark on landscapes. I object to chisel marks and climbing bolts as much as graffiti despite the ease of removal of bolts and chisel marks vs. graffiti.