The 17.23-acre outdoor cannabis and indoor processing project is located on 349 acres of agriculturally zoned property in the unincorporated area of the County of Santa Barbara (“County”). Operations would be located approximately 3,000 feet from the City of Goleta boundaries. Before Hidden Trails may cultivate cannabis, Hidden Trails must construct the project, including installing security fencing and cameras, and apply for and obtain a County Business License and State Cannabis licenses. Operations of the cannabis project are at least 10 months out.

All parties are committed to preventing odor episodes, to developing an objective, measurable way to detect odor, and to utilizing weather monitoring and technology to pinpoint odor sources. If odor is reported and verified, Hidden Trails is required under the terms of the settlement to immediately implement a series of steps to identify the source and mitigate odor. If odor problems recur, Hidden Trails will continuously review their operations and systems and, if they are inadequate, will upgrade their odor control equipment and employ additional mitigation measures to ensure their neighbors do not experience adverse odors. Under the settlement agreement, Hidden Trails also will also train its employees to follow stringent operational protocols that it will implement during harvest periods to minimize odor.

Hidden Trails is also required to install a H2S monitor for its irrigation system so that any release of H2S levels at odor nuisance levels would be reported to the City within one hour of detection. In addition, Hidden Trails would not be allowed to irrigate with well water again until a corrective action plan has been approved by the Air Pollution Control District (APCD). Residents who smell H2S, which can released from agricultural and domestic wells in the region, should call 911 so that the County Fire Department, as first responders to H2S issues, can measure H2S levels and determine if any emergency response is necessary.

These actions represent today’s state-of-the-art approach to resolving odors associated with cannabis farms. If more advanced technology is developed in the future, the settlement agreement contemplates the implementation of the most current odor control systems. The City of Goleta and Hidden Trails are committed to working with the residents nearby to resolve any future issues. 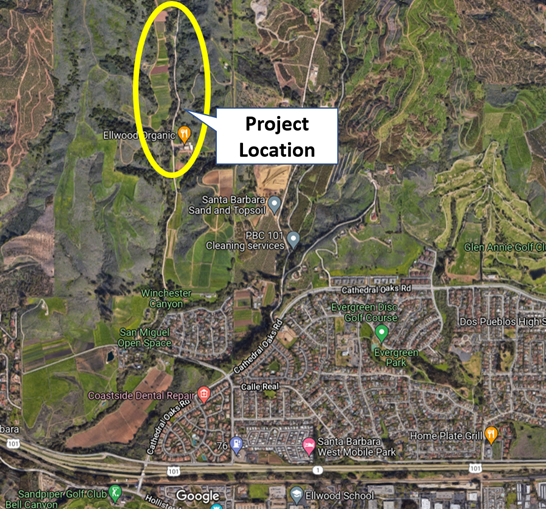 Looking at the map, it looks like this grow abuts a creek. What is the creek shown?

Looks like Winchester Canyon Creek. Pretty sure it's bone dry. The larger creek that comes through the residential area is Ellwood Canyon Creek and flows into Bell Canyon. As a long time resident of the nearby neighborhood, I'm not too worried about this. I know there have been grows up the canyon before and some even closer and the smell was never an issue.

It is interesting how concerned people are about the odors. If its not public knowledge, no one has a complaint. But if it's leagal and advertised, it's like the sky is falling. I have lived in Winchester my whole life and also have no issues with it. Let the farmers create the tax money and hopefully break even on the rent. Good luck to them.

Why is there no discussion on the impact of water use? I can't mow my lawn but growing pot is ok?? Thank you City of Goleta leaders... all that voted in favor should resign for being incompetent in performing your job duties.

The farm's not in the City - the City didn't have much leverage here. Seems like they negotiated a pretty reasonable outcome for county ag land 3,000 feet away.

The sense of smell is vary subjective and varies widely among people. It will be interesting to see how this plays out. The compromise seems to be reasonable and recognizes at least concerns about odor and mitigation thereof.