The Nile Tulip Tree explodes with a dazzling display of yellow flowers from July through September.  Despite its attractive flowers and foliage, its many merits must be relatively unknown to most Santa Barbara residents, because it is currently under-utilized in our landscapes.

It was first used in Santa Barbara in the late 1940’s as a street tree.  It has only recently been rediscovered to be a decorative and hardy tree - one we should certainly plant more frequently along our streets and in our parks and gardens.

Its most outstanding feature is its flowers.  Each is large (up to 3 inches long) and has five bright-yellow petals.  These petals are fused together into a funnel shape, are slightly ruffled along the edges, and are streaked with red or maroon stripes down in the throat.  The flowers occur in panicles (clusters) at or near the branch terminals.  These clusters stand out brilliantly against the dark-green leaves.

A nice point is that a Nile Tulip Tree begins to bear flowers when it is only 4 to 5 years old - you do not have to wait long for its lovely floral display!

The flowers are pollinated primarily by bees, but their sweet nectar is also very attractive to butterflies and ants.

After the flowers are pollinated, the fruits that form are 1-foot-long bean-like pods, which turn brown when mature and split open lengthwise.  Inside each pod are hundreds of seeds surrounded by papery wings.  The winged seeds are quickly dispersed by the wind.  After the seeds depart, the dried pods become twisted spirals that can hang on the tree until the next flowering season. 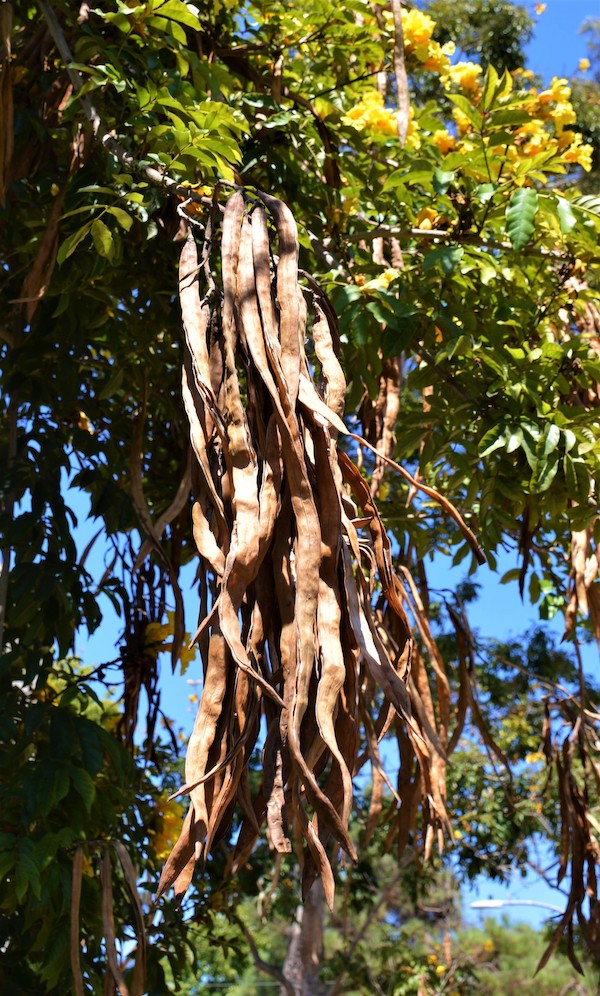 This evergreen tree has a lush tropical appearance - so it is a nice surprise to find that it is drought-tolerant once established - a definite benefit in our Mediterranean climate.

It is a small- to medium-sized tree.  At maturity, it rises 30 to 40 feet in height with a spread of 20 to 25 feet.  It can be fast- or slow-growing (between 3 to 6 feet a year), depending on the amount of irrigation it receives.  When young, its growth habit can be somewhat irregular and gangly; it may require some gentle pruning to train its crown development.

Its pinnately compound leaves can be over a foot long.  They have up to seven shiny, dark- green, ovate, leaflets arranged parallel to each other along a central stem.  The leaflets range in size from 3 to 7 inches in length and 1½ to 3 inches in width, with the largest leaflet being at the terminal end of the leaf.

The bark is a light gray that, with age, will turn a darker gray, become finely fissured, and flake off in patches to reveal light brown bark beneath. 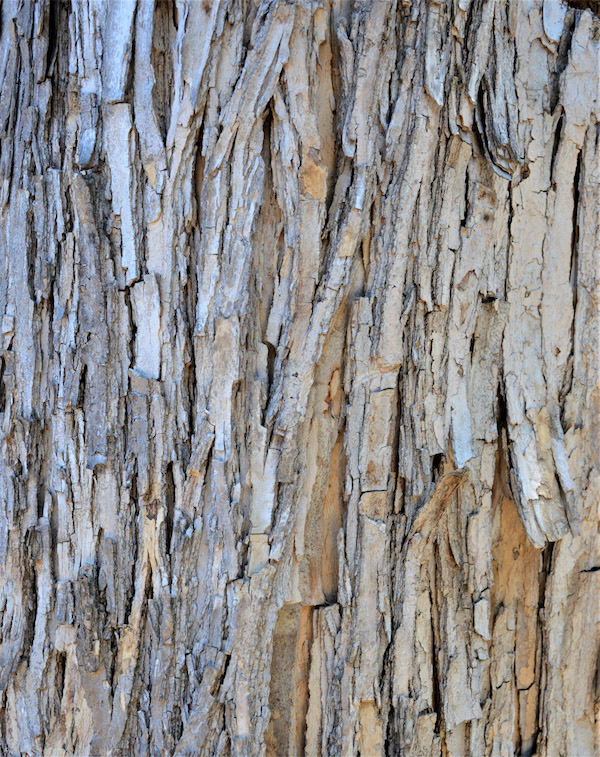 As the common name “Nile Tulip Tree” implies, it is native to equatorial east Africa.  There, it is found growing in the savannas and on dry rocky ridges and hillsides.

In its native regions, the Nile Tulip Tree has been used extensively for its lovely wood, which is beautiful, brownish-yellow, and fine-grained.  As lumber, it is easy to cut, yet is exceptionally durable and resistant to termites.  It is readily carved to make utensils and crafts.  With all these qualities, it is popular for cabinetry and fine carpentry.  It is also harvested and used for more basic utilitarian purposes as fuel and charcoal.

In traditional African folk medicine, its leaves, bark, and roots are used to treat a wide variety of maladies, including aches and pain, arthritis, and respiratory problems.  Interestingly, its leaves are a favorite and nutritious food of elephants.

Because it is a fast-growing and drought-tolerant tree, the Nile Tulip Tree has been used extensively in Africa and other parts of the world for use as windbreaks, for soil erosion control, to improve soil nutrition, for soil moisture retention, and for reforestation.

The botanical name for the Nile Tulip Tree is Markhamia lutea.  It was given the genus name, Markhamia, by Berthoud Seeman to honor his friend Sir Clements Robert Markham (1830-1916), a British geographer, explorer, and author. Markham is well known for having collected cinchona trees in Peru and then introducing them to India, thereby providing a local source of lifesaving quinine to treat deadly malaria.  The specific epithet, lutea, comes from the Latin word, “luteus”, meaning “yellow” and referring to the bright yellow flowers.

It is best propagated with fresh seeds, although seeds can be stored for a short time at room temperature.  They normally have a germination rate of about 50%.  Seeds will germinate quickly when they are sown in a sunny location, are just barely covered with soil, and are kept moist.

It is sensitive to cold but can survive temperatures to 25 degrees without damage.  Colder temperatures will cause it to drop its leaves and may cause limb dieback.  It is remarkably drought-tolerant once established but, of course, will look its best with occasional deep watering during the dry season.  It can tolerate a wide range of soil types but does better in deep, well-drained soil.  It will grow best in full sun to partial shade.

Although excellent as a street tree, the Nile Tulip Tree is just the right size for residential yards and can easily be pruned to fit comfortably in smaller patio gardens and courtyards.  If you are looking for a beautiful (yet hardy) tree to create a lush tropical atmosphere, you would do well to select - and enjoy - this almost-forgotten tree.

Mature specimens of Nile Tulip Tree can be seen in De La Guerra Plaza (between City Hall the News-Press building), in the 300 block of West Pedrigosa Street (1 tree), in Alice Keck Park Memorial Gardens (2 trees), on the north side of Micheltorena Street at San Pascual (2 trees), and in front of El Montecito Presbyterian Church (2 trees).  Several young trees stand in the 700 block of State Street and in the 100 block of East Ortega Street.

I have an African Tulip Tree in my yard that is gorgeous, but it's a late bloomer with no flowers until September. It helps keep my yard in bloom practically year round. I was so happy to find it. I was inspired by one on State at Los Olivos St (?) (I think). I love the yellow flowers of the Nile Tulip Tree. I have seen these in Samarkand neighborhood too (I believe).

Nice flowers, but thanks for the warning this looks like a very messy tree.

[Update]: Santa Barbara Junior High parents were notified the school was locked down last week and now it's been confirmed to be due to a parent confrontation.

The Public Health Department issued a beach closure for Isla Vista between Ocean Road and Camino Pescadero Park due to a sewage spill.

The Goleta Police Department is planning a DUI checkpoint within the city limits of Goleta on Friday.

C.B. shares a cartoon about the inner workings of Santa Barbara's City Hall.

The City of Goleta now has an ordinance regulating single-use foodware accessories and standard condiments.

The County of Santa Barbara Citizens Independent Redistricting Commission will finalize its recommendations for county redistricting process improvements at its virtual meeting on Monday.