The Jelly Palm’s distinctive crown - a big ball of recurving blue-green fronds - makes it an easily identified tree in the landscape.

Its fronds are very strongly arched (almost forming a half circle) and gracefully recurve toward the trunk.  Each frond is large - 5 to 10 feet in length - and bears two rows of leaflets (40 to 80 leaflets on each side) - with each leaflet reaching 2 ½ feet in length.  Palms with these types of fronds (pinnately compound) are called “pinnate palms” or “feather palms”, because each frond resembles a bird’s pin feather.

In addition to its curved fronds, the Jelly Palm can be differentiated from its relatives (the 8 to 12 other species in its genus) by the coarse black spines which rise from its fronds’ petioles (stems).  Great care should be taken to avoid these when pruning! 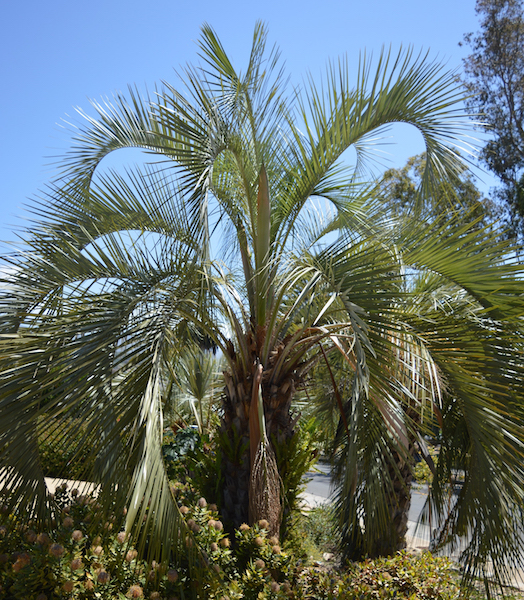 Its solitary and stout trunk grows up to 18 inches in diameter.  As older fronds fade and die, they persist on the trunk for several years before they detach, leaving behind ragged, upright, 6- to 10-inch long frond bases.  If these frond bases are (carefully!) pruned off, the resulting scars will decorate the trunk handsomely.

This is a rather slow-growing palm, putting on less than 6 inches per year in height.  At maturity, it can reach 20 feet.

The Jelly Palm is monoecious, which means that an individual palm bears both male and female flowers; consequently, it can self-pollinate.  In summer, a mature palm will produce several 2- to 4-feet long spathes (flat envelope-like structures) - each holding within a bulky inflorescence (flower bearing stem).  When the spathe dries, it opens to reveal the inflorescence, which carries 500 to 100 axillary clusters of thousands of tiny (3/8” long), sweet scented, yellow-lilac-reddish flowers.

After pollination, the flowers develop into fruits, which are yellow-orange, semi-flattened ovals (1 inch in diameter), thinly fleshed around a single large seed.  Though quite edible and similar in taste to pineapple, the flesh is rather fibrous in texture.  Apparently, the fruits do not fully ripen until they have fallen on the ground.  The fruit pulp can be cooked to make a delicious clear jelly (hence the name “Jelly Palm”) or fermented to make wine. 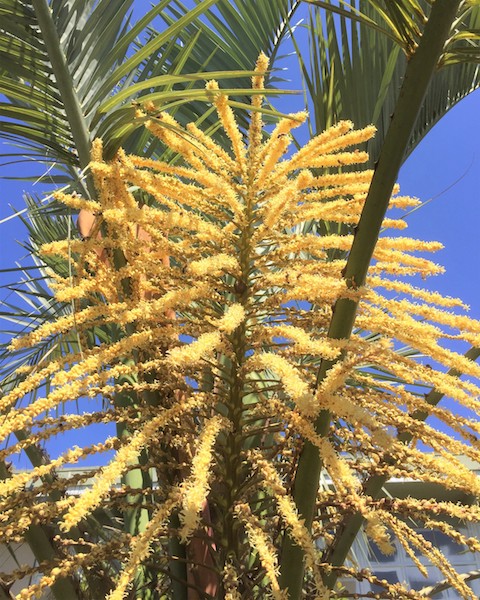 The members of the Jelly Palm’s genus have a gregarious tendency to interbreed, resulting in a good number of described subspecies and varieties, as well as hybridization with other closely related palm species.  For example, the hybrid of Jelly Palm with the Chilean Wine Palm (Jubaea chilensis), commonly known as the “Chilean Jelly Palm”, is a beautiful combination of the remarkable features of both parents - and is available commercially.

The Jelly Palm is a native of two disjunct areas of South America - one in Uruguay and the other in the Pindo region of southern Brazil.  Its other common name, “Pindo Palm”, refers to this region.  In its homelands, it is found in sunny, drier locations with sandy soils.

Its botanical name is Butia capitata.  The genus name, Butia, is the Brazilian name for this palm.  The specific epithet, capitata, is a combination of the Latin words “capit”, (meaning "head") and “ata” (meaning "likeness") and refers to the similarity of its round crown of fronds and trunk to a person’s head and neck.

The Jelly Palm has been planted in Santa Barbara since the late 1800’s.  In 1893, it was advertised for sale in the mail-order catalog of plants in Ralph Kinton Steven’s commercial nursery located at the corner of Cold Springs Road and Sycamore Canyon Road.  A portion of his nursery property is now the grounds of Ganna Walska Lotusland, where old and healthy Jelly Palms still stand.

This palm has proven to be well-suited for our area because its deep roots can withstand our periodic droughts.  Surprisingly, it is also considered to be the cold-hardiest feather palm, able to survive down to in 12 degrees.  It can tolerate a wide variety of soils, provided they are well drained.  In our mild Mediterranean climate, it will do best when planted in sun to partial shade and given moderate to occasional water.  Fortunately, it appears to have no serious insect or disease problems.

The Jelly Palm has many outstanding ornamental qualities and practical uses in a sustainable landscape - and can be enjoyed for many years without outgrowing its space.  It also does well as a potted outdoor palm.  All things considered, it is a lovely palm for Santa Barbara’s streets, public parks, and private gardens.

Mature Jelly Palms can be seen in several locations around town:  in the median on State Street (between Mission Street and Constance Avenue); in Alice Keck Park Memorial Garden (along the Micheltorena Street side); in East Alameda Plaza; at the County Courthouse (on the Anacapa Street side); and, at the entrance to the Cabrillo Pavilion Arts Center.

Thanks Dave, I do look forward to seeing the great variety of trees that our mild climate allows us to have here. Beautiful photos !

How I love palm trees!

Rainbow Bridge nursery in carp has (or did) 5 gallon specimens.
Gorgeous palm, watch for overwatering if its in a pot.