In an effort to support business activity that is still open, all timed parking signs are in full force. Traffic safety is of tantamount importance – Bike lanes, red zones, and other permitted parking spaces are being enforced throughout the City.  You are responsible for continuing to observe all signage pertaining to parking your vehicle on a City street or structure.

Vehicles parked on City streets or structures must observe all other parking requirements and laws outside of being granted dispensation from street sweeping.

Update by an edhat reader

I'd like to correct Mr. Wagner from the SB Police Department on his incorrect statement in the comment section. Anyone who has received parking tickets this week should call the Police Department to have it immediately cancelled and if you have already paid, ask for a refund ASAP.

The City of Santa Barbara issued an email on Saturday, December 5 titled "Stay at Home Order Goes Into Effect Sunday at 11:59 p.m." In that email, the city clearly states that parking enforcement will be cancelled.

"Effective Monday, parking enforcement on City streets will be suspended for the duration of the Stay Home Order due to cancellation of street sweeping. This includes timed parking downtown," the email states.

Clearly, there is confusion between the City and Police, but residents should not be held accountable because they cannot properly communicate. Contest your tickets now. 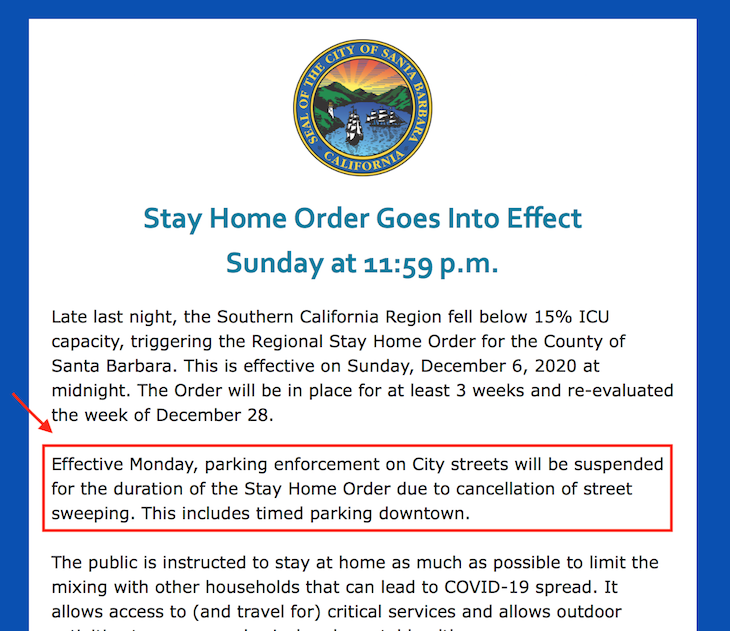 My neighborhood incorrectly assumed street sweeping would stop during the recent stay at home order. [Monday] morning the meter patrol came through and ticketed many cars followed by street sweeper minutes later.

It sounds hard enough for a city resident to be sure who (SBPD or City) calls the shots on parking and ticketing, especially if everyone didn't get the email, but how are non-residents (visitors, employees, etc) supposed to know what's going on with street sweeping?

Do what many of my neighbors did- moved their cars for street sweeping like they always do.

Ok Anthony Wagner. If you want to hide behind your police press release fine. But let's get this straight. The City of Santa Barbara sent out an email to its citizens stating that parking enforcement is cancelled, including timed parking due to the stay at home order. And now the Police Department wants to walk back this deal. No dice. The city already stated this will not happen, in a PUBLIC EMAIL to its CITIZENS. So you need to deal with it and stop with the ticketing. This BS press release will not counter the public email sent last week and the citizens should rebuff any and all ticketing. Thanks for trying.

If the city knew what it was doing, it could easily cancel ticket numbers X-X which were doled out improperly. Putting the burden on the citizens to get their invalid tickets annulled is wicked and a violation of the PD's duty to citizens. For the record, I am not some cop hater and I support out police. This is a simple matter. It's the PD's mess, so they're the ones who should fix it.

@Pit, the official city email was submitted to edhat who then posted the update in the above article.

I'm on the City's list and did not receive an email saying that timed parking was being eliminated. I don't see that cars on my street have increased so I think most of us are not changing are behaviour due to the shutdown order. Can you post the email or provide a link?

I didn't see the street sweeper on 1300 blk San Andres. And, the hotline said it was cancelled. But, I did see Parking Enforcement driving around downtown streets.

In an effort to support business activity that is still open, all timed parking signs are in full force. Traffic safety is of tantamount importance – Bike lanes, red zones, and other permitted parking spaces are being enforced throughout the City. You are responsible for continuing to observe all signage pertaining to parking your vehicle on a City street or structure.

Vehicles parked on City streets or structures must observe all other parking requirements and laws outside of being granted dispensation from street sweeping.

Can someone explain to me why street sweeping is cancelled? Last I checked road work and maintenance are an essential business. Assuming street sweepers have solo drivers I fail to see how street sweeping poses a COVID risk. This makes no sense.

When they cancelled street sweeping at the beginning of the pandemic the idea was that if everybody is staying home, they will need to be parked near home. Normally cars leave the residential areas when people drive them to work, but if people stay home, their cars will stay home too, so it would be unreasonable to expect people to find alternate parking spots.

This morning, I saw a ticket on vehicle parked in a bikelane. i guess someone didn't get the memo.

Looks like they didn't ticket the bikelane parkers this morning.
A quick history on the bike lane I mentioned. It is a tempory bike lane in the mornings for 2 hours. Essentially, it was put in to help the kids bike to school safely. It was not ticketed doing the 3 months of covid shutdown in the spring. Not sure why they are ticketing it now considering school hasn't been in session since March.

Ticket for parking in bike lane is not a street sweeping ticket, right? All other parking restrictions are still in effect as far as I know. 72-hr storage limit, oversize vehicle, red zone restrictions, etc....

I am the original poster. My neighbor informed me of the ticket he received (and others he saw) so that may have been for something else but the street sweepers were here on Monday on the eastside. I contacted the city and this was the response.

Yesterday at noon we sent our sweepers home. Due to the recent stay at home order, we will not be sweeping the residential areas until December 28th. At that time we will reevaluate the current conditions. Please feel free to contact me with any other questions or concerns.

street sweeping on the WS is the only time i get an actual chance at parking in front of my house... :(

I heard The Baron on NewsMess radio say that ticketing would be suspended for three weeks and that parking in general wouldn’t be enforced, except in the downtown (75 minute) area. He seems to get a lot of stuff wrong, so this may or may not be correct.

They have missed sweeping my San Roque neighborhood three straight times. They missed again today, too.

Our neighborhood had regularly scheduled street sweeping yesterday. No ticketing though. Usually they precede the sweeping but parking ticket crew was not out this time.

Given Mr. Wagner's info, who is misinformed? Mr Wagner or 420 and the Edhat reader that did the original post? Maybe 420 saw the meter patrol putting lotto scratchers on cars as part of the pandemic relief effort?

whew, feisty! :-) You have a point. I sure would like to know more.

REMINDER: All other parking violations are still in full force.

Can a photo of the ticket be sent via cell phone to be forwarded to the appropriate personnel to void the ticket?

That said - Mr. Wagner, PLEASE get SBPD on the same page as everyone else! This is the second time in a month... Someone should be vetting the City's declaration of no parking enforcement if it doesn't jive with what SBPD is doing (and it doesn't). If what they REALLY mean is no parking time limit or timings (e.g. Street sweeping days) are enforced, BUT illegally parked vehicles are still ticketed, that is not the same thing as "no parking enforcement". Words matter!

851am, more than likely they were illegally parked in dangerous or overly inappropriate ways, e.g. Red curbs and blocking driveways etc. Though it's not made explicitly clear, I think we can all understand that they are not enforcing parking TIME LIMITS - not that anyone can park illegally and get away with it.

Mr. Wagner @SBPDPIO, please see the above update to article. The city indeed stated in a public email that parking enforcement is cancelled. I hope those 14 tickets you reviewed will be cancelled.

As the original poster - I also called the street sweeping hotline on Monday and there was a recording with NO mention of discontinued street sweeping. Maybe by the 8th they had so many call they revised but your comment on no street sweeper on the eastside on Monday is completely false.

I can’t find Councilmember Jordan post but the city of Sb posted on next door “ Effective Monday, parking enforcement on City streets will be suspended for the duration of the Stay Home Order due to cancellation of street sweeping. This includes timed parking downtown.”
https://nextdoor.com/p/gHN_fd5hz-Gx?utm_source=share&utm_content=c&init_source=copy_link_share

Councilmember Jordan posted on NextDoor that street sweeping was canceled for the duration of the stay at home order 3wks. City's website does not list that it has been canceled but it takes a while for them to update their pages.

I noticed that on my way to work Monday. Not fair at all, these people were told there would be no enforcement of parking temporarily! Contest the ticket. I’ll wait for the pro lock downers to come out in full support of tickets while these people can’t even work.

As if anyone would wish that people would get tickets during a stay at home order. Why are extremists so negative about everything? Not only is their glass half-full, they assume everyone wants to take their water by force.

Time to look at the positive

Green is the standard for

CWANZY - Again WE ALL PAY for

My vote (of which I have none

Their intent is great but

I don't see how this is going