On Halloween the folks at the Santa Barbara Bait Shop called the Santa Barbara Wildlife Care Network about a gull with a hook stuck in its feet and fishing line stuck in its mouth on Stearn’s Wharf. When the gull arrived at the Wildlife Care Center, staff quickly and safely removed the hook in the gull’s foot. An x-ray revealed that the line coming out of the gull’s mouth was attached to a hook in the lower esophagus. That would be more tricky to remove, but wildlife veterinarian Dr. Avery Berkowitz had a plan.

Since the fishing line was still attached, Dr. Berkowitz was able to follow the line down to the hook, then carefully manipulate the hook out with a tube without letting the hook damage the bird on the way out. The extraction was a success!

This gull’s journey did not stop there, though. X-rays also revealed a mandible fracture and some overgrown bill keratin making it difficult for the gull to eat. Staff anesthetized the gull and prepared for surgery to correct the bird’s beak. Staff needed to make sure the mandible was healing 100% perfectly straight, otherwise the gull may have issues with eating and beak keratin overgrowth in the future. Dr. Berkowitz used a dremel to shave down the bird’s overgrown beak keratin. Then, staff re-fractured the beak to set it in the right position and inserted 4 small pins through the mandible, connected by a bar and screws on each side to hold the beak in the right place. The bars were wrapped, and the gull woke up normally from anesthesia. 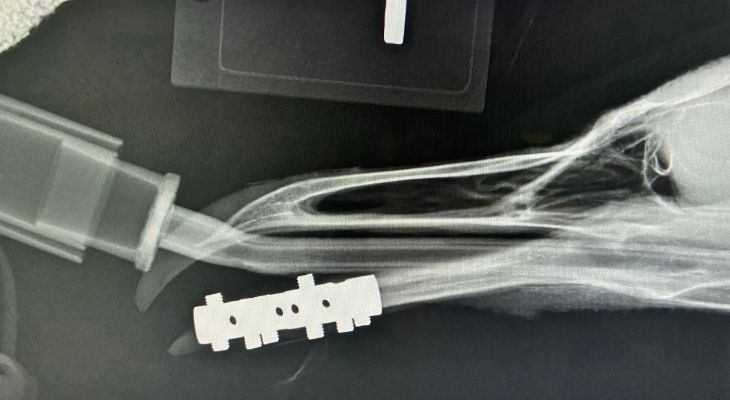 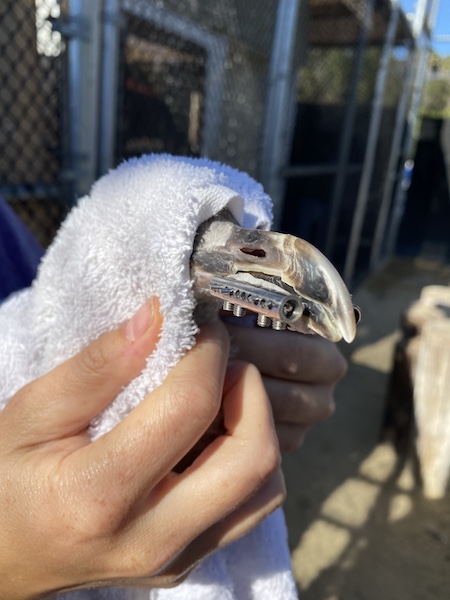 The pins were removed about three weeks later. The beak was nice and straight! The holes from the pin sites are healing well. Dr. Berkowitz expects the gull will be ready for life in the wild soon!

Fishing line, hooks, and nets are big threats to wildlife, especially seabirds, marine mammals, and freshwater species. Please remember to “clear your gear,” and call the Santa Barbara Wildlife Care Network’s HELPline at (805) 681-1080 if you see a wild animal in need.

To help animals like this gull, make a donation by visiting https://www.sbwcn.org/donate

Wow, amazing effort and good job there. Hopefully the bird doesn't just turn right around and get snagged up again by another fisherman's hook.

Incredible world. People are dying of COVID and living rough in bushes and suffering for lack of medical care and not having access to education and being sued for educational debt which will drive them into worse poverty and abused by people close to them and suffering from addiction and..... Yet some people are posting stories about removing a hook from a seagull? Seagulls are opportunistic and aggessive predators. They will grab anything that looks like food and damned the consequences. I have had seagulls steal my bait and fought them to the boat where it was difficult to grapple with them and remove the hook. Sometimes they simply break the line and fly off. They will endure.

Sure, seagulls are opportunistic, but stealing your bait or snacks doesn't exactly make them "aggressive predators." The world would undoubtedly be better off if we could swap a few billion people with a few billion seagulls.

Very unlikely that a seagull can “break” a monofilament line. Much more likely that the fisherman cut it. That's usually a death sentence for the bird. The gulls are only so aggressive because the have become habituated to being fed, by having scraps thrown over side or, at the pier, being left around or, occasionally, being used to tease the birds to entertain the pier visitors.

Thanks so much to the Bait Shop for working with the SBWCN and to the SBWCN for now having a veterinarian on staff. Great story —- thanks for publishing it, Edhat!

6:32 - unlike you, the rest of the world is capable of addressing more than one issue at a time. The SBWCN does incredible work for our local wildlife, despite your efforts.

Such a heartwarming story :) Awesome job folks of the SB Wildlife Care Network (as usual!)

Awesome job! Yes, being kind to animals is still a good thing during covid, a pandemic born out of cruelty to animals. Please clean-up your hooks & lines fisherpeople!

It is remarkable that the attack on the criticism of the priorities of this reported interaction do not speak at all about the priorities of our use of resources. I have known many people who suffered for want of any offer of assistance to damage they suffered from events that were way beyond their control. What hypocrites we are.

If anyone has a good rental

Also seen on Orizaba Lane, at

Except it’s not really a

Pitmix, Even worse is

If a third lane magically

All the more reason to “live

We had decent luck posting a