The Santa Barbara County Sheriff’s Office would like to congratulate the eight Sheriff’s deputies who were among the 20 law enforcement professionals who were honored yesterday, May 10, 2017, with a prestigious H. Thomas Guerry Award. The honors were handed out at ceremony held at the Santa Barbara County Board of Supervisor’s Hearing Room and attended by personnel from local law enforcement agencies, local dignitaries as well as family and friends of those being recognized. 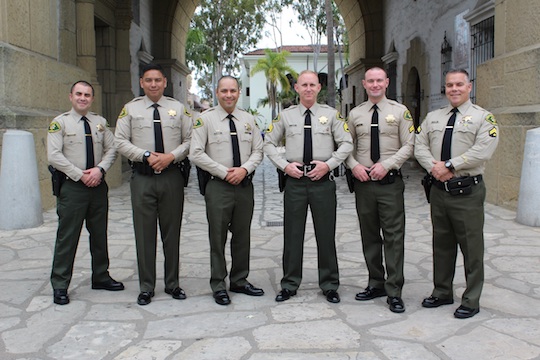 This year, seven Sheriff’s deputies received the H. Thomas Guerry Award for Valor. The honorees included Sgt. James Zbinden, Sr. Deputy Michael Harris, Deputy Justin DiPinto and Deputy Micha el Hollon who were recognized for their resolute actions during a life-threatening incident on June 11, 2016 at Paradise Campground in the Los Padres National Forest.
An ax-wielding camper, who was under the influence of a controlled substance, threatened campers and first responders. The subject threw axes at friends, battered an elderly camper and assaulted several people including a firefighter and several deputies. It took deputies more than ten minutes of struggling with the extremely combative camper to take him into custody. They used a number of less lethal force options to resolve the dangerous incident without deadly force. 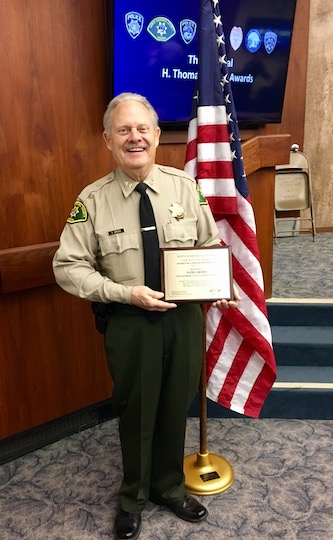 Sheriff’s Deputy Special Duty Ray Gamboa, Deputy Brice Bruening and Deputy Jesus Gutierrez also received an H. Thomas Guerry Award for Valor. They were recognized for their courageous response to a vehicle over the side call on November 4, 2016 off Highway 101 at “Three Bridges”. The deputies worked with CHP and fire personnel to extricate a female occupant who was trapped in her vehicle which had caught on fire. Their quick-thinking and immediate actions are credited with helping to save the woman’s life.

During his presentation of the Guerry Award, Sheriff Bill Brown said Chief Gross is well deserving of this honor due to his unsurpassed devotion to duty. He said, “His commendations reflect his career of caring for people both inside the organization as well as the public he has served. Sam is highly respected in law enforcement circles and is described by many as a mentor and sage counsel.

His knowledge of the workings of the Sheriff’s Office and county government combined with his network of relationships and the high level of respect which he is accorded with by everyone who knows him make him an invaluable resource.”

The Sheriff’s Office wants to thank the Santa Barbara Citizens Council on Crime for putting on the H. Thomas Guerry Awards each year and for providing an opportunity to recognize law enforcement personnel who have gone above and beyond to protect and serve their community.