On July 2, 2022, at about 9:24 PM, a caller to 911 reported a shooting with a man down in front of the Louie B's Bar, 213 E. Main Street. Officers responded and found a man down with a gunshot wound. Officers, firefighters, and paramedics gave immediate aid to the victim at the scene and he was transported to a local hospital where he later died. The identity of the victim is pending notification of next of kin.

When officers arrived on scene, they noticed an adult male sitting on the sidewalk a short distance away from the victim.  Officers began to question the individual and found cause to arrest him for drug related violations. With additional information gathered during the investigative process and physical evidence located at the scene, the suspect was arrested and booked for 187 P.C.- murder.

The individual arrested was Ron Tutay, twenty-seven years old from the State of Washington.

Anyone who may have additional information important to this investigation is encouraged to contact Detective Oscar Corral at (805)928-3781 ext. 2243.

This is the fourth homicide in the City of Santa Maria this year. 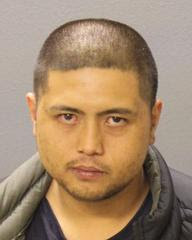 Saying "not trying to be mean

Ridiculous. Another waste of