The Dedicated Staff of edhat.com was on the sidelines with a counter in one hand, umbrella in the other, determining how many Santa hats were actually worn this year. For perspective, last year we counted 873 and the year before that we counted 1,092. This year the total number of Santa hats worn in the parade was... 708. Quite the decline from years prior. The dedicated staff did notice that a lot of people opted for a warmer beanie and umbrella opposed to Santa hat this year due to the rain.

The edhat reader with the closest guess is... LouWho with a guess of 850 hats. Congrats LouWho who has won a prize package filled with art gifts and games from local businesses 3D Studio Gallery and Game Seeker. 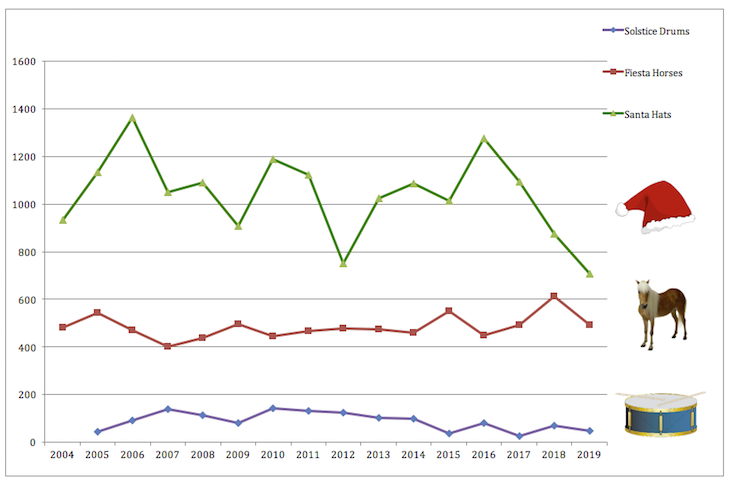 Do you feel it? The crisp in the air, the smell of hot cocoa, the warm glow of outdoor lights. It's the holiday season and Santa is coming!

This coming Friday, on the 6th of December at 6:30 p.m., more than 65,000 spectators will crowd around State Street from Sola to Cota to view Santa Barbara’s festivities, the 67th Annual Downtown Santa Barbara Holiday Parade. The Downtown Organization has announced this parade will go on, rain or shine... well with a few caveats. The parade will be canceled with torrential rains (although it's not expected to occur) and the parade may be delayed if heavy showers occur.

Potential rainstorm aside, it's also time for edhat's annual Santa Hat Counting Contest. The edhat reader who guesses the closest number of Santa hats worn by those in the parade by Friday, December 6th at 12:00 p.m. will receive a prize!

This year's theme is "A Tropical Holiday" and local nonprofit Heal the Ocean will serve as Grand Marshal.

“It was incredibly fitting to choose them as Grand Marshal – with the theme of ‘A Tropical Holiday’, it was a great opportunity to celebrate their tireless efforts to protect one of Santa Barbara’s greatest assets,” said Carrie Kelly, Executive Director for Downtown Santa Barbara.

Enter your Santa Hat guess below:

Roger reports a large group of transients allegedly assaulted a family in the 700 block of State Street.

Officials confirmed one person is being quarantined at Ventura County's Naval Base at Point Mugu due to concerns of the novel-coronavirus.

Roger reports a fall victim with a possible head injury at Parma Park.

Roger has the scanner reports. "A lot of calls about stolen vehicles lately and it seems like many of them are because the keys were left in the ignition."

A vehicle crashed over the side of Harris Grade Road in Lompoc on Tuesday evening.