The brush fire on Santa Cruz Island has grown to over 250 acres since Tuesday afternoon, according to officials.

The fire hit near 100 acres on Tuesday evening and continues to grow while firefighters work to gain a containment line.

Approximately 30 people were evacuated from the island on Tuesday. There are currently no injuries reported. 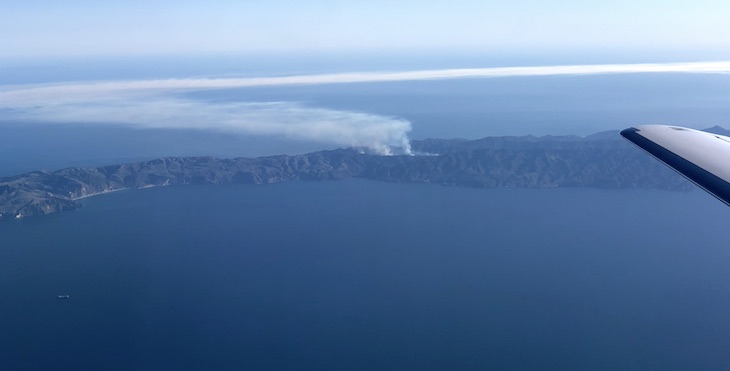 First responders are working to contain a fire that broke out on Santa Cruz Island Tuesday afternoon.

After 2:30 p.m., edhat readers wrote in to report seeing smoke from various parts of Santa Barbara.

According to a spokesperson for the Channel Islands National Park, the fire has burned approximately 20 acres. There are currently no evacuations or structures threatened.

Crews are working to attack the fire by air south of the main ranch, which is land owned by The Nature Conservancy.

It's speculated that this may be related to a controlled burn of eucalyptus trees earlier this week.

Updates will be added as they become available.

Edhat readers are reporting a possible fire on Santa Cruz Island. Does anyone have more information?

By Jessica
I know there were supposed to be controlled burns in the  Goleta area yesterday [and today]. Does anyone one know that there was a planned one on Santa Cruz today?  I called 911 and asked them if they were aware of a fire, and they simply said, "Yep." 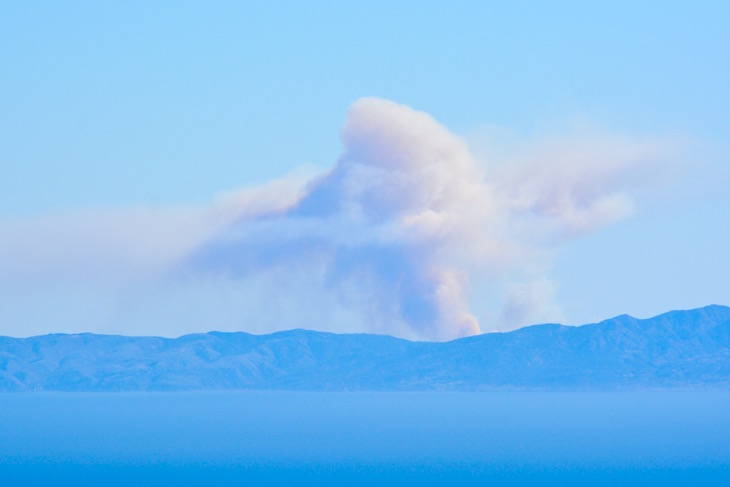 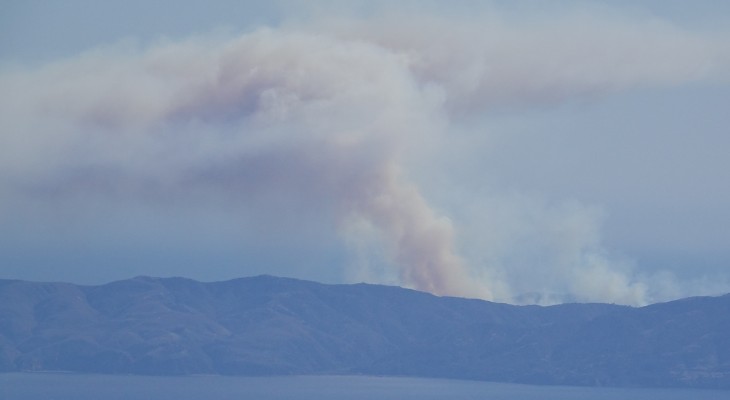 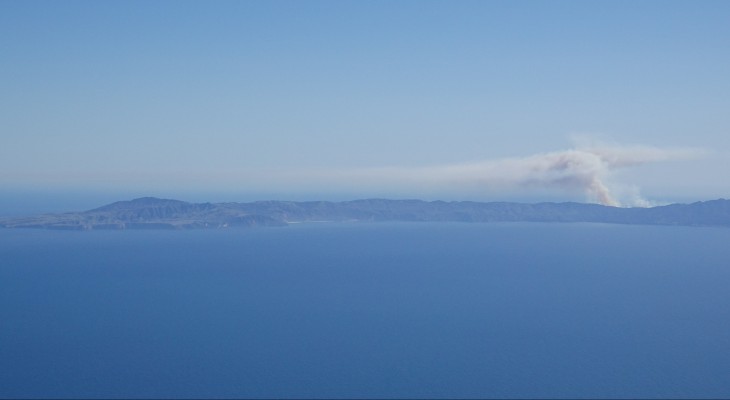 By Alex
Noticed a plume if smoke from UC Santa Barbara. Is there a controlled burn happening out on Santa Cruz Island? 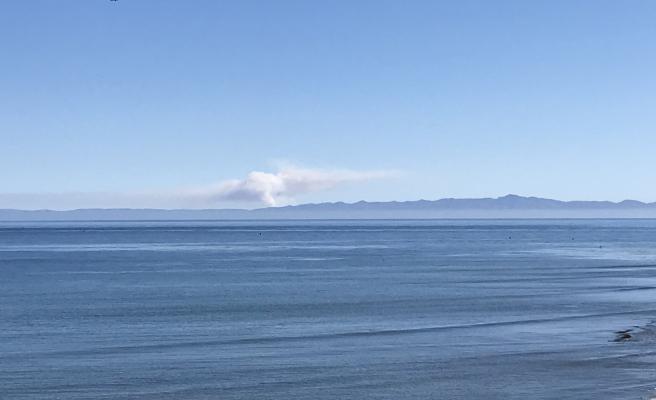 By Austin
20+ acre fire on Santa Cruz Island! It broke out around 3:30 PM. Information is limited at this time. 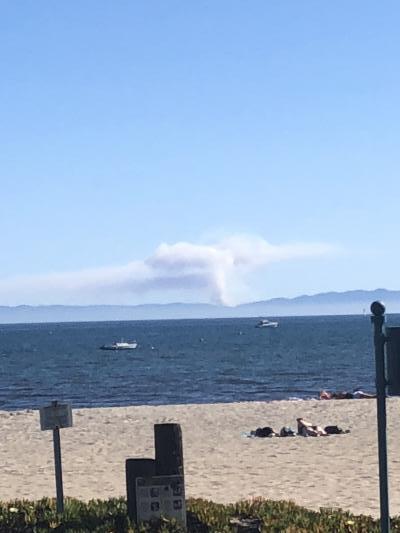 By Rob
Sure looks like a fire on Santa Cruz. 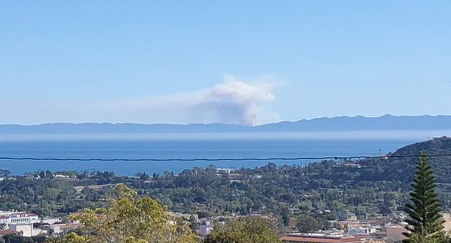 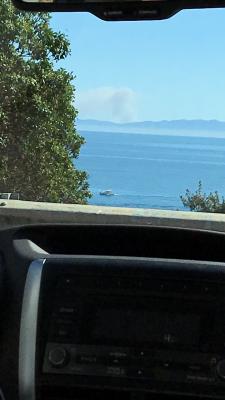 By an edhat reader
Is there a fire on the back side of Santa Cruz? Looking at the weird smoke looking formation ... 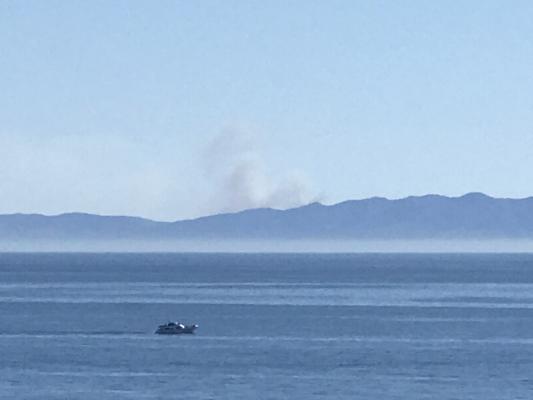 KEYT.com says its 20 acres and the fire escaped a controlled burn from several days ago, and re-ignited.

'Controlled' burns are well known for becoming 'out of control' FIRES... Have been since I was a youngster, a very long, long time ago :( I have always cringed when they have announced controlled burns will be happening.

'Controlled' burns are well known for becoming 'out of control' FIRES... Have been since I was a youngster, a very long, long time ago :( I have always cringed when they have announced controlled burns will be happening.

We are in a severe drought. When the "oops" factor rears its ugly head after a controlled burn ignites a fire, well...isn't that special. Shouldn't we have new rules?

I would say they're working with a delicate balance. It has been shown that controlled burns can reduce the possibility of MAJOR fires... Unless, of course it becomes out of control. I suspect they are aware of the possibilities. And, have known about them for a VERY long time. What 'new' rules would you suggest? Part of the problem is that Mother Nature doesn't like to 'follow the rules'. She always seems to have surprises waiting for us.

Okay, wasn't going to address the first comment about it... Being where we are, we see things, sometimes way before anyone else, or we're able to pinpoint locations better than 'somewhere between Turnpike and Los Carneros'. I call to make sure someone is aware and 50% of the time, I'm the first caller, so don't tell me not to bother 911.

I have often called the KEYT news desk to learn if they're aware of something going on. They are pretty good about answering, and/or checking to see if it's been reported. ( Now, if they were better about keeping people informed about what is going on when they return to normal broadcasting, like a ticker tape across the bottom the screen with updates during a fire or whatever is going on, I'd be happier with them.)

I heard nesting pairs of snowy plover were being relocated.

Didn't the Fire Weather Forecast predict high winds? They're supposed to check the weather before burning, and not ignite when high winds are expected. Sounds like someone may have messed up .

I remember years ago when this happened an injunction was placed which prohibited the use of seawater to fight fires. So fire-fighting on the islands includes a lot of shovel work and water has to be flown or shipped in from the mainland.

Contained? No plume or even much smoke visible from W. Camino Cielo. Nothing on visible or InfraRed satellites. The new "improved" InciWeb still says 250 acres as of 3pm. Not much info available it seems. Anyone seeing significant smoke still, or hearing things on scanners?

Now says two more crews of hotshots will come to contain the fire. Island Packers cancelled all trips out to Santa Cruz Island (but are taking more trips to Anacapa and whale watching).

Seems perfectly the right thing to do asking 911 if they have gotten a report of the fire. What do you suggest would be better, just saying "there is a fire on Santa Cruz"? 911 is there to have reports of emergencies and asking if they know, have already gotten the report, about it is basically reporting a fire in case they were unaware.

The National Park Service tried a controlled burn above China Harbor shortly after they gained control of the east end. It got away, too.
Firebugs masquerading as ecologists don't think very carefully about island situations. They just want to burn.

I am a science journalist who

Based on information that’s

Hurrah! Massive thanks to all

When you look up his name in

Always nice to read something

It is very expensive to