Lucky, a Humboldt penguin at the Santa Barbara Zoo, who made national headlines for wearing a specially designed shoe, was humanely euthanized today, May 20, 2020, after battling a degenerative foot condition.

“Lucky was an amazing penguin and while it is incredibly sad to say goodbye to him, I really want to focus on celebrating the life of this penguin who overcame so many obstacles and taught us so much. It was impossible not to admire and adore this penguin for his resiliency, tenacity, and character” shared Dr. Julie Barnes, Vice President of Animal Care & Health at the Santa Barbara Zoo. “We’ve had a tremendous team at the Zoo caring for Lucky during his lifetime, allowing him to live far longer than expected and to live a full life like any of our other penguins. This would not have been possible without our partnership with Teva and their many team members who have been so committed to Lucky since he was a chick.”

Lucky hatched at the Santa Barbara Zoo in 2010 and once he began to walk, the keepers noticed that he limped. The Zoo’s veterinarian discovered abnormalities of his foot bones that prevented him from walking on the flat of his foot. The problem did not correct itself as he continued to grow, and the deformity became more pronounced. Surgery at the time was unlikely to correct the problem, so the animal care team decided to make him a special shoe to protect his foot, but the shoe needed to be waterproof due to the aquatic environment that penguins live in.

The Zoo found a community partner in Teva, a local adventure footwear company that makes shoes and sandals especially for people who are active in, on, and around the water. Teva’s design team volunteered hundreds of hours to design and make a special shoe for Lucky, and the company committed to providing shoes for Lucky’s lifetime. 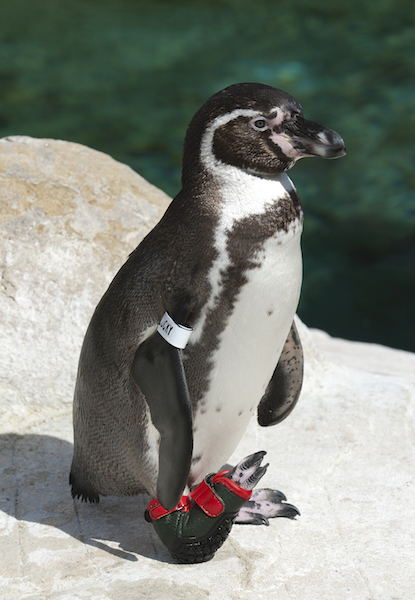 Thanks to Teva and his custom shoe, Lucky was able to walk, jump, and swim like the other penguins, and was able to thrive as an active member of the Zoo’s penguin colony much longer than expected. In 2017, he sired a chick with his mate Nica. Lucky’s remarkable story made news headlines across the country, including a feature on the “Today Show.” Two books have been written about Lucky and his shoe, and he even became a YouTube sensation with the release of Parry Gripp’s song, Penguin With A Funky Shoe.

Over the years, Lucky’s ankle joint continued to deteriorate, as expected with this type of deformity, so in 2018 the decision was made to amputate Lucky’s foot. While this surgery was successful in relieving the pain associated with the deteriorating joint, he developed complications at the end of the amputated limb that have continued to increase, significantly impacting his quality of life. After exhausting all possible options for resolving these complications, the difficult decision was made for humane euthanasia.

"Lucky has been a pearl in our community,” shared Stuart Jenkins, Owner, Blumaka, and White Hat Innovation, and Santa Barbara Zoo board member. Jenkins was the former Vice President of Innovation for Deckers Brands and led the Teva team in the development of Lucky’s shoe. “Lucky's adversity stands out above everything and has made everyone in the community who interacted with him better. His adversity allowed children with similar health challenges to recognize their own perfection. His adversity enabled children to embrace other children with disabilities more lovingly. His adversity warmed the heart of everyone who met him, saw him on TV, or read his story.  His adversity demonstrates the value of a community coming together to help - in this case, Deckers Outdoor was the high minded corporation that partnered with the Santa Barbara Zoo. This collaboration helped other zoos around the world to better care for other animals.  In the end, this lovely little penguin facing adversity helped so many gain a greater appreciation of our own humanity."

"Lucky’s shoe was the most expensive shoe I have ever had a part in developing, with a small team from around the globe that came together to find a solution. A solution that made life possible. That solution provided ten years of a full and robust life for our friend Lucky,” continued Jenkins. “It's too short but the goodwill lives on because the lessons we learn are permanent. That lesson for me is choosing to turn adversity into an opportunity to do something good."

“Over the course of Lucky’s life, I have been struck by the number of people who have come together to lend support to his well-being,” said Rachel Ritchason, Director of Collections at the Santa Barbara Zoo, who was Lucky’s keeper when he hatched and has remained by his side throughout his entire journey.  “When we first learned the extent of Lucky’s foot abnormalities, we weren’t sure he would be able to thrive. We couldn’t find any record of an adult penguin, in the wild or in a zoo, who had such an abnormally developed foot. The response to the Zoo’s call to help a penguin chick who couldn’t walk was remarkable. So many have contributed to giving a resilient little penguin the very best life he could have.”

“Both Lucky and Deckers have helped many other penguins over the years,” added Barnes. “Over Lucky’s lifetime we’ve received many calls and emails from other zoos, including as far as Australia, about how we cared for Lucky, as they had penguins with similar problems. We have even sent his old boots to other zoos sharing with them the design and materials that were used. This type of collaboration and sharing of knowledge is incredibly beneficial for all animals in human care.”

“Lucky’s journey has taught us all so many valuable life lessons, and his legacy will live on here at the Santa Barbara Zoo, and far beyond,” shared Rich Block, President & CEO of the Santa Barbara Zoo. “He was beloved by those who looked after him and everyone who heard his story. He truly was a lucky penguin who overcame great physical adversity to live a great life here with us. He has been a part of the Zoo family for many years, and our staff and volunteers are grieving this significant loss.”

Anyone wishing to make a gift in memory of Lucky may consider these options: make a donation to the Santa Barbara Zoo (www.sbzoo.org/support), which funds general operations to support the Zoo’s animals, conservation work and education efforts, or purchase an enrichment item for another Zoo animal on the Zoo’s Toys4Animals Amazon Wish List.

I'm sure it is a hard loss for those that were close to him and loved him. 10 years with his deformity was a long time to hang in there, in nature he wouldn't have made it long. RIP

The way the title of this article is written it looks like it is saying that Santa Zoo's (Zoo IS) lucky that the penguin died. Those who don't know the name of the penguin or take a second glance to read it might have some confusion. Better title would be something like "Lucky, the Shoe-Wearing Penguin, Dies at Santa Barbara Zoo" or "Shoe-Wearing Penguin, Lucky, Dies at Santa Barbara Zoo" or something along those lines. This is one of those funny news titles that will be found in other places as jokes on how the wrong writing or grammar can create some funny misunderstandings.

I think you make an excellent

Are there still any single

How do you overcome the

How does one thoroughly