The two were matched by the Species Survival Plan (SSP) managed by the Association of Zoos and Aquariums (AZA), and have a breeding recommendation.

The zookeepers are enjoying getting to know the two new monkeys, and are helping them comfortably adjust to their new home. “Penelope has settled in well and while she’s still a bit shy, she has been opening up and starting to show her personality more and more,” shared Kristen Wieners, Zoological Manager & Training Facilitator at the Santa Barbara Zoo. “Calabaza is very curious about everything and anything in his surroundings, and is also quite the talker when he gets excited! We are in the process of introducing the two to each other, and so far things are going well.”

Penelope and Calabaza are the first two of their kind to call the Santa Barbara Zoo home. White-faced sakis are named for the male’s appearance, but the males and females look very different. The males are recognizable with all black hair and distinctive white faces, while the females and their young have brownish-gray “salt-and-pepper” hair.

White-faced sakis are known for their loud calls that monogamous pairs of males and females sing together to establish their territory. Their song helps seal their bonds of courtship as well as defend their turf. Penelope and Calabaza can be found in the primate exhibit (near the penguins) with the golden lion tamarins, an endangered species of monkey also native to South American rainforests (specifically in Brazil). 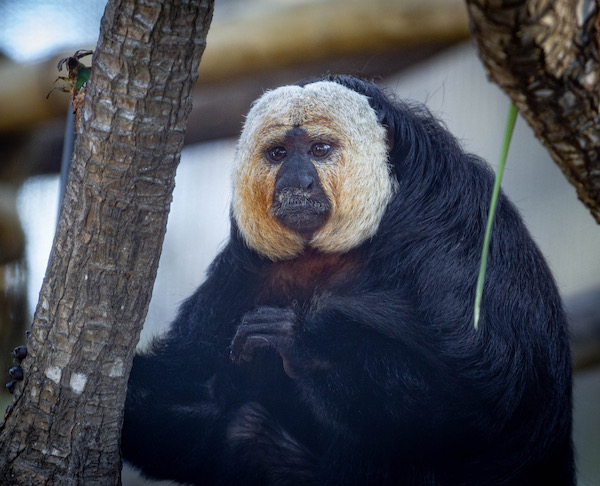 White-faced sakis are small tree-dwelling primates from South America and are named for the male's appearance. Males have black hair and white faces, while females and young have brownish-gray hair with bright white to pale red stripes extending from each eye to the corners of the mouth. Sakis are capable of leaping as far as 30 feet between tree branches. These active monkeys live in the treetops of the South American rainforests. They might venture on the ground to forage for fruit, but they spend most of their time in the trees, where they sleep as well. White-faced sakis are omnivores that feed primarily on fruit, nuts, seeds, and insects.

While the Zoo will be temporarily closed, the community is encouraged to visit their website sbzoo.org as well as their social media channels (Facebook, Instagram and Twitter) as a way to enjoy the Zoo from the comfort of home. The Zoo looks forward to welcoming the public back once it’s safe, and appreciates the community’s ongoing support. To consider making a donation to the Santa Barbara Zoo’s Emergency Operations Fund please click here.

About The Santa Barbara Zoo

Known as one of the world’s most beautiful zoos, the Santa Barbara Zoo is located on 30 acres of botanic gardens and is home to more than 500 individual animals in open, naturalistic habitats. The Santa Barbara Zoo is accredited by the Association of Zoos & Aquariums (AZA), representing the highest level of animal care, and participates in AZA endangered species programs for Masai giraffe, California condor, island fox, and Western lowland gorilla, among others. As a private 501(c)(3) nonprofit corporation, the Santa Barbara Zoo depends on community support, not tax dollars, for operations and improvements. Visit sbzoo.org.

How cute. Two more captives for our viewing pleasure.

CHillin, they have done studies and they can't find that zoos have ever spurred their audience to greater animal activism, which is usually how they justify their existence. Plus humans are still pro-creating at a rapid rate, so what are the chance that these monkeys, born into captivity, can ever go back to their habitat, assuming that captive animals can be taught to live wild again? But enjoy the show.

Did you read the article? The animals are in danger of extinction and this will help repopulate the species. They are better off in expert care and educating the public than being shot or burned alive in a rainforest.

Could be a previous contractual agreement. Cool anyway.