The Santa Barbara Zoo is pleased to share that the Masai giraffe Adia gave birth to a male calf named Raymie at 1:55 AM on January 19, and the two are now bonding behind the scenes in the giraffe barn.

The calf’s legs were first observed around 11 PM Tuesday night, and Adia was in active labor for about three hours. The calf was standing 45 minutes after it was born, is nursing, and appears strong and healthy. Raymie is Adia’s second calf and according to Dr. Julie Barnes, the Zoo’s VP of Animal Care & Health, she is once again showing excellent maternal behavior. At his first medical exam on Thursday, January 20, he weighed 71.4 kg and measured approximately 5 feet 9 inches tall.

“We are thrilled to share the news of this birth and welcome another Masai giraffe to our herd,” said Dr. Julie Barnes, the Zoo’s Vice President of Animal Care & Health. “Each giraffe born at the Zoo is very important to this population and conservation of this species, so we’re especially proud of the critical work done at the Santa Barbara Zoo with our incredible animal care team. While we’ve seen many giraffe births here at the Santa Barbara Zoo, it’s always exciting to see another calf born and stand for the first time.” 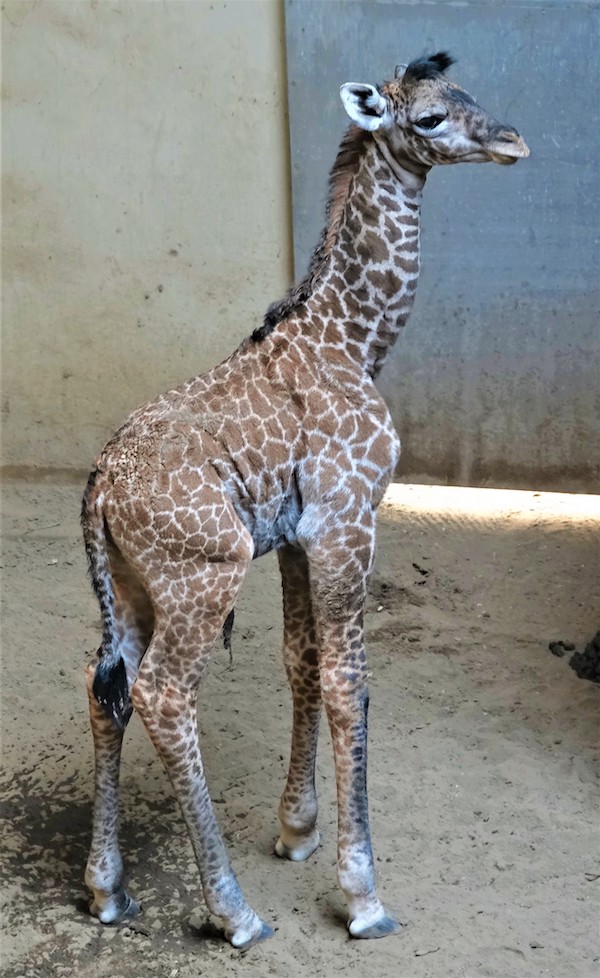 Masai giraffes are listed as endangered due to the significant decline of this species in the wild in recent decades. The number of Masai giraffes under human care here in the U.S. is relatively small, and the Species Survival Plan manages the population to ensure that it is healthy and genetically diverse so that the population thrives.

The Zoo’s animal care team will determine when Adia and Raymie are ready to leave the giraffe barn. Until that time, they will remain together to bond behind the scenes. The public is encouraged to tune into the Zoo’s social media channels (Facebook, Instagram, and Twitter) for photos and updates.

This is the second baby for mother Adia (age 7) and the tenth for the father, Michael (age 15). Their first calf together, Twiga, was born in March 2020, just after the Zoo closed due to the pandemic. Michael is the most genetically important male Masai giraffe in North America, as he is only related to his offspring. He was brought to the Zoo from Canada in December 2011 and has since sired ten calves. Eight of the calves have moved to other accredited zoos as part of a cooperative breeding program among accredited members of the Association of Zoos and Aquariums (AZA). Two of Michael’s sons have had offspring, so he is now a grandpa. Adia arrived in 2017 from the Cleveland Zoo.

The Santa Barbara Zoo’s Masai giraffe herd now numbers five with the addition of the new calf: Michael, Adia, Audrey, and Twiga. The Zoo’s other adult female giraffe Audrey is also pregnant and expected to give birth in July 2022.

The giraffes at the Zoo are among more than 120 Masai giraffes that live at 28 North American zoos accredited by the Association of Zoos and Aquariums (AZA).

Raymie is generously sponsored by the McGraw family, and Adia sponsored in loving memory of Polly Blackburn. The public can also help the Zoo support the herd by becoming a Foster Feeder sponsor of the giraffe herd. A donation of $50+ helps with the cost of feeding the growing giraffe family. New giraffe Foster Feeders will receive a digital certificate with a baby photo of the calf, a Masai giraffe fact sheet, and recognition on the Zoo’s Foster Feeder board.  For information or to become a Foster Feeder, click here.

In 2018, the International Union for Conservation of Nature (IUCN) announced Masai giraffes are endangered. There are an estimated 37,000 Masai giraffes in Kenya and Tanzania, but a more thorough census is required. They are at risk due to poaching and habitat loss and degradation. Giraffes are the tallest land mammal, and the Masai is the largest subspecies, growing up to 17 feet tall and weighing 2,700 pounds.

About the Santa Barbara Zoo

The Santa Barbara Zoo is open daily from 9 AM for members and 9:30 AM for general admission until 5 pm; general admission is $19.95 for adults, $14.95 for children 2-12, and free for children under 2. Parking is $11. The Santa Barbara Zoo is accredited by the Association of Zoos and Aquariums (AZA).  AZA zoos are dedicated to providing excellent care for animals, a great visitor experience, and a better future for all living things. With its more than 200 accredited members, AZA is a leader in global wildlife conservation and is the public’s link to helping animals in their native habitats. Visit www.sbzoo.org.

Are any of these many calves or their subsequent grandcalves going to be free or will they always be zoo prisoners?

Good lord. That calf would survive in the wild just as well as you'd survive on Mars. Accredited zoos are helping keep the populations of these endangered animals alive AND bring about awareness so people will donate conservation money and hopefully stop demolishing their environments. What needs to be cracked down on is non-accredited zoos, backyard animal breeding, and black market sales of exotic animals (a la Tiger King).

where exactly was this? LPNF