The Santa Barbara Zoo is excited to officially reopen to the public on June 23, by online reservation only. While guests can expect temporary changes at the Zoo that comply with guidelines outlined by local and state health authorities, they will once again be able to explore the wonders of wildlife with their families, take part in fun, educational activities, and have the chance to meet the Zoo’s newest residents - two African lions. A male named Ralph and a female named Felicia arrived on May 6, and have a breeding recommendation from the Association of Zoos and Aquariums (AZA).

"We’re truly excited to safely welcome guests back to the Santa Barbara Zoo,” shared Rich Block, President and CEO of the Santa Barbara Zoo. “We remain committed to protecting this community and have gone through extensive planning and preparation so that our guests can feel safe and comfortable while visiting. While your next visit will feel different than before, we're confident our new lions Ralph and Felicia, along with Twiga, our new baby giraffe, will bring some much-needed smiles to a lot of faces!"

While the Santa Barbara Zoo was closed at the time of their arrival due to the coronavirus pandemic, the team was prepared to welcome the new lions. As part of the AZA’s cooperative breeding program, the plan to bring in new lions began even before the passing of longtime beloved lion, Chadwick, last year. The two new lions who traveled together via ground transport arrived safely and went directly into the lion holding area to get acquainted with each other while they quarantined for 30 days. 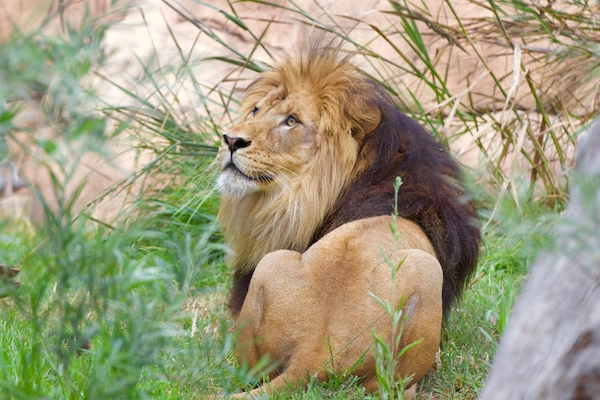 Felicia was born at Riverbanks Zoo in Columbia, South Carolina, on April 10, 2018, and lived in a pride with one male and six other female lions. She was the dominant cub in her litter and pride. At just two years old, she is not fully mature and not expected to reproduce just yet.

Ralph was born at the Indianapolis Zoo in Indiana, on September 21, 2015 -- sharing the same birthday as Chadwick, the Zoo’s last remaining lion, who passed away in December of last year. Ralph lived in a pride that included his brother, sister, and mother. His previous keepers described him as calm, curious, and respectful to his mom and sister. Chadwick also came to Santa Barbara from the Indianapolis Zoo, which is another special shared connection with Ralph.

“We have had lions at the Zoo for almost 50 years, so we are very happy about the arrival of these two new lions following a brief hiatus. African lions are considered ‘vulnerable’ and are disappearing quickly in some parts of their wild range. We look forward to continuing our work with the AZA Species Survival Plan, ensuring a thriving and sustainable population for African lions in human care and contributing to the conservation and education efforts for this species,” shared Dr. Julie Barnes, Vice President of Animal Care & Health.

Felicia and Ralph are generously sponsored by Premier Foster Feeder Angelo Mozilo, in honor of his late wife Phyllis. This includes the expenses to move the lions, make updates to their exhibit, and help feed them for the next year. The public can also welcome the new lions by becoming a Foster Feeder sponsor of the new pride. While supplies last, new Foster Feeders at all levels will receive a 12" African lion plush from Wild Republic, a personalized Foster Feeder certificate (includes honoree’s name and fun animal facts), and recognition on the Foster Feeder board at the Zoo. For more information or to become a Foster Feeder, click here: https://sbzoo.pivvit.com/special-african-lion.

The Santa Barbara Zoo looks forward to making the reopening a fun and safe experience for all guests, staff, and animals! Guests can use the online reservation system to book a timed entry slot prior to visiting the Zoo. A complete guide to the new safety enhancements and modifications can be found on the Zoo’s website.

The Santa Barbara Zoo has had lions since 1970, with the arrival of a male named Dandylion. Over the following decades, the Zoo cared for such lions as Dolly, Paka, and Kali. The "Cats of Africa" exhibit opened in 2003, welcoming the arrival of the Zoo's last mating pair, Chadwick and Gingerbread. This pair produced two offspring - Kiki (now at the Fresno Chaffee Zoo) and Docha (now at the John Ball Zoo). Gingerbread died at age 18 in 2017, and Chadwick died most recently at the age of 21 in December of 2019.

African lions are the second largest big cat after tigers and are the only truly social cats. In the wild, they live in groups called prides, which consist of six to seven lions on average. All females in a pride are typically related, and outsiders of either gender are not tolerated. Listed as “vulnerable” by the International Union for Conservation of Nature, their population is steadily decreasing in the wild. In just two decades, populations decreased by 43 percent, and it’s estimated that as few as 23,000 remain today. Threats to lions include habitat loss, poaching, and retaliation killings by farmers attempting to protect their livestock. One of the main causes is the alarming rate at which they are losing their habitats due to expanding human populations and the resulting growth of agriculture, settlements, and roads.

How large is the pen?
Certainly, too true about the future of lions in the wild. Derek Joubert films are outstanding; this was shown at the SBIFF: https://www.imdb.com/title/tt1692928/?ref_=ttls_li_tt

well it's certainly no savannah but hey maybe we can just set em free in montecito and let em survive off lap dogs.

Does anyone know if these captive lions or their progency can ever be returned to the wild? If not, I am not sure what these captive breeding programs are expected to accomplish given the disappearance of wild habitat across the world. What is the solution to that?

Infinitesimally likely. They were born in captivity and could not survive in the wild. The purpose and the hope is that enough people will care enough about these captives (and their progeny) to work for saving the habitat in the wild; perhaps these creatures can be considered ambassadors to their wild relatives....

How terrible to have these magnificent animals waste away, day after day and year after year, in their tiny enclosure. All the zoo cares about is hoping these two will breed so that lion cubs will attract more zoo visitors. I live for the day when zoos across the world are banned.

Mini, for better or for worse, that will be the day when a lot of species slide into a slow but irreversible slide towards extinction due to habitat destruction and lack of genetic diversity in wild populations. Zoos are about a lot more than putting animals on display.

Mary Lou, an American alligator, has lived at the Santa Barbara Zoo since it first opened in the 1960s, making her the oldest and longest-term resident.