Local Santa Barbara travel, food, lifestyle writers Bonnie Carroll, Michael Cervin, and Richard Mineards were among the panel of jury judges to select the winners for the Gelato Festival America Santa Barbara. Judging was based on presentation, flavor, structure, and creativity. Competitors were introduced prior to the judging to share details on their entree and answer questions. 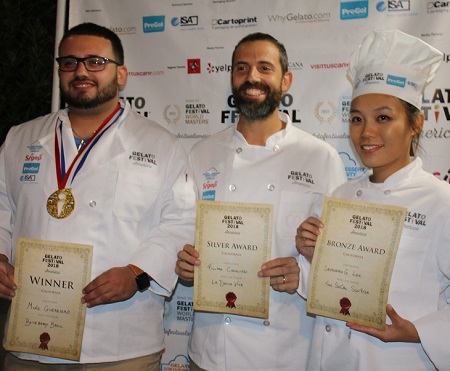 Mike Guerriero from Gelotti Essex in Caldwell, New Jersey won 1st place and is the first American to take first prize at the Gelato Festival. Other prizewinners included three residents of California: Noel Knecht of Black Dog Gelato in San Clemente, Savannah G. Lee of Savannah’s Gelato Kitchen in Millbrae and Filippo Cianciosi of Gelato Love in Carlsbad. An honorary mention and peoples choice award was given to Marilyn Way, a resident of Calgary, Alberta, Canada. Mike Guerriero is the first American to win this prize and he is now eligible to compete in the North American Semi-Finals in 2019 for a chance to be one of three to represent America at the Gelato Festival World Masters in 2021 in Italy. His gold medal, presented by ISA, was created by Florentine Goldsmith Paolo Penko. “Guerriero said he was very excited to win the 1st place gold medal and looked forward to competing again to make it to Italy in 2021.” The New Jersey blueberry, with the perfect amount of genovese basil puree and lemon juice, was my favorite and was one delicious gelato!

The Technical Jury prize was awarded to Noel Knecht, Black Dog Gelato in San Clemente, CA and the Popular Jury Award was presented to Marilyn Way of Calgary, Alberta, Canada by the general public for best flavor and she also picked up the Speed Cup Race by ISA for using a spatula quickly to fill cups the Italian way. I loved the clean and simple taste of this delicious gelato. Carpigiani Gelato University, the festival sponsor that runs classes about the art of preparing gelato for all the stages, presented this award.

Mike Guerriero won the Gela-to-go Award for selling the most gelato during the festival.

Held in collaboration with strategic partners Carpigiani Gelato University, Carpigiani Frozen Dessert University and Sigep - Italian Exhibition Group, Main Sponsor PreGel and WhyGelato.com, and Official Technical Sponsor ISA, the Gelato Festival America 2018 generates the first entrants into the Gelato Festival World Masters 2021, the challenge for the best artisan gelato chefs on the planet. The winning gelato chefs selected at each stage of the Gelato Festival America 2018 will win the right to continue the challenge towards the semi-finals and ultimately the final – it’s the World Cup of gelato, a journey with hundreds of trials over four years on five continents! 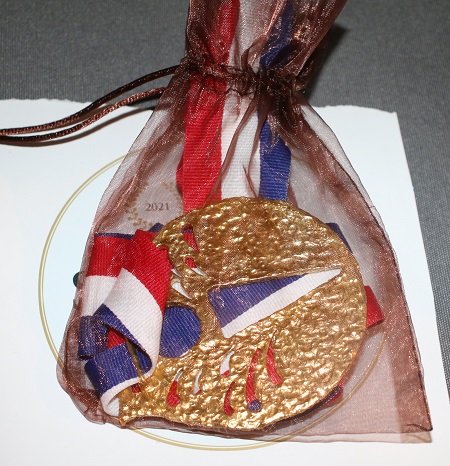 Gold medal made in Florence, Italy.

The Gelato Festival made its debut in Florence in 2010 inspired by the idea of the first gelato recipe by the architect Bernardo Buontalenti in 1559. Since then, the Gelato Festival has expanded its borders, beginning in Italy, then spreading throughout Europe and finally to the United States in 2017 - A total of 64 festivals, preparing the whole planet for the world championship of the Gelato Festival World Masters 2021. For upcoming event information visit www.gelatofestivalamerica.com.

Toggle Comments (Show)
Santa Barbara Writers on Panel to Select 2018 Gelato Winners
This Black Dog Gelato is not to be confused with the original Black Dog Gelato in Chicago. I believe the use of this name violates any number of ethical (not to mention legal) considerations. I strongly recommend that Noel Knecht change the name of his enterprise before he invites a legal challenge.
Please Login or Register to comment on this.

Per the Wall Street Journal,

And don't forget the trick

Dog of the Week: Titan

Bravo! For being smart.

Great video, a must watch!

What a beautiful Kitty....

A few moments later I heard