The symphony is an art of the past, attended by the elderly and retired, no? Wrong!

Pictures at an Exhibition began at 8 pm Saturday, January 19 at the Granada Theatre. It commenced more traditionally with beautiful music honoring both the founders and the composer Brahms. The first hour consisted of an over-arching strings rendition, with the accompaniment of woodwinds, brass, etc. behind, and all keeping to the beat of the percussionists, powerfully making themselves known in the very back. Even here was a hint of young and less-young combined, including a soothing and gorgeous musical score from the 1880s and concertmaster Jessica Guideri’s beautiful shock of bright blue hair. 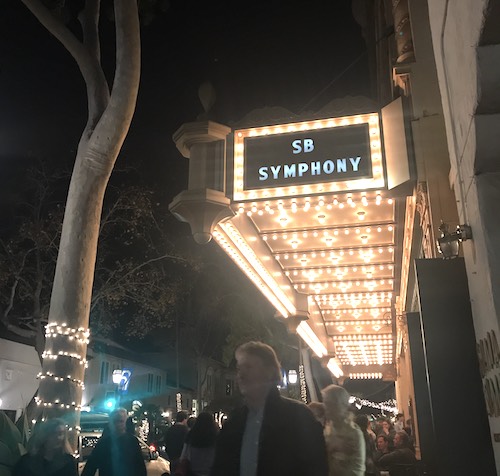 After the intermission, came Pictures at an Exhibition’s creative twist. Unfolding from the ceiling and coming dramatically down above the stage, a screen unfurled before us, cut into three sections. The lights came on, the Symphony accompanied, and the show was on! USC School of Cinematic arts created a film accompanied by specific orchestral music, and the effect was utterly unique.

Much in the way viewing a painting in person versus on a screen changes the effect, so too did the live orchestra accompaniment create an entirely new environment. Art ranging from what appeared to be impressionist paintings, to cartoon characters, to mere shadows on a landscape much like the home screen of a Wii, there were no bounds to these student and alumni’s imagination. The impossible became possible: paintings became portals, inkblots came alive, and perspective and shadow played across the screen. Modern technology came into a traditionally formed place filled with young and old, the attendees as various as the instruments upon the stage.

The Granada Theater on State Street is made to impress: complete with red plush chairs, golden and painted decoration, creative and plentiful lighting, and a broad, high set stage. While it appears to be the place solely for the more affluent, the Santa Barbara box office provides discounted tickets for the younger viewers. Anyone in their twenties can buy a $20 ticket, and any college student, depending on the show gets a $10 one. Other group discounts, etc. are also available! Call the box office for more information: (1)-(805)-899-2222 (Extension 2).

The Santa Barbara Symphony continues to surprise and inspire, and plays for everyone. Check out their other events at thesymphony.org, and watch the film Amadeus with chorus and orchestra accompaniment on March 16 and 17!

Cat is a quirky life-lover pursuing language and writing in its myriad forms. Check out her author-profile in Goodreads: Goodreads Author Profile

We were at the Sunday performance and are inching toward the older demographic, but because it was an afternoon performance, we saw a number of extremely well-behaved children, who appeared to be enjoying the music (and movie) as much as we were. And a tip -- if you support a non-profit by buying an Axxess card, you can use it to buy 1 ticket and get 1 free for one of the performances. You just have to go to the Granada ticket office to buy the tickets.

Would have loved to have seen