Community leaders and activists joined together on Thursday to rally against hate after an altercation resulted in hateful homophobic language.

The Pacific Pride Foundation hosted "A Community Response Against Hate" after a brief rainstorm in Santa Barbara's De La Guerra Plaza around 5:00 p.m. Approximately 100 people showed up in support of the LGBTQ community and Ethan Bertrand, an openly gay man and Isla Vista community leader who was verbally assaulted with homophobic slurs by Isla Vista landlord James Gelb on State Street earlier this month.

A video was captured of the altercation and Gelb was cited with disturbing the peace this week by Santa Barbara's District Attorney Joyce Dudley.

In response, the Pacific Pride Foundation put together this event to denounce hateful language, homophobic slurs, and violent words or actions. "Today, LGBTQ+ people in our community still face harassment, discrimination, and the threat of violence. Together, we stand for equality and safety," the foundation wrote in a Facebook post.

Bertrand took the stage to thank everyone for supporting him and the LGBTQ community while emphasizing he's proud to be gay, a statement he made towards Gelb in the video. He expressed that hate has no home in Santa Barbara and even though hateful incidents take place, not only against the LGBTQ community but against women, immigrants, and homeless people, he's grateful that everyone is coming together to say "not again." 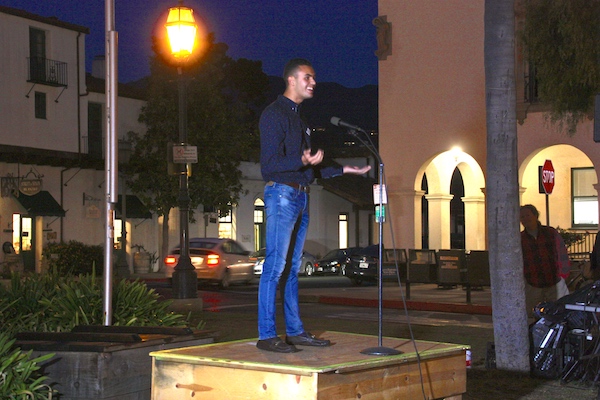 Openly gay Goleta City Councilmember Kyle Richards spoke of many mixed emotions around this event. He said he's angry and defiant, but at the same time, he's proud of the courage exhibited by local LGBTQ members on a daily basis. "We will not be silenced... we refuse to be quiet about this and allow this type of behavior to be ok. It's not ok," said Richards.

Santa Barbara's newly elected and soon to be mayor, Cathy Murrillo, expressed we should all respect one another. While speaking on stage she paraphrased Martin Luther King Jr.'s famous quote: "Darkness cannot drive out darkness; only light can do that. Hate cannot drive out hate; only love can do that." She finished with a statement directed towards Gelb, "I hope there is hope for him to change."

Jordan Killebrew of Black Lives Matter gave a heartfelt speech directed at Bertrand. "There is no place for this type of behavior. Period. Ever," said Killebrew. He expressed this being important and we won't stand for hate, "especially for a person like Ethan who puts his heart and soul into the community."

Bertrand closed with another Martin Luther King, Jr. quote, "Nonviolence is a powerful and just weapon, which cuts without wounding and ennobles the man who wields it. It is a sword that heals."

The Pacific Pride Foundation, Santa Barbara County's LGBTQ+ and HIV/AIDS advocacy and support center, is hosting a public grand opening of their new offices on Saturday from 12:00 - 4:00 p.m. The new space is located at 608 Anacapa Street, the former space of Arch Rock Restaurant, next to Antioch University.

Were you listening to a

Admission: I used to be less