Congratulating those promoted, Chief Bernard Melekian stated, “Leadership is an opportunity to serve the men and women of the Santa Barbara Police Department and the community of Santa Barbara. It is not a trumpet call to self-importance. Lieutenant Miller, Sergeant Beltran, and Sergeant Miller reflect that ethic in all that they do which is why they are being promoted.” 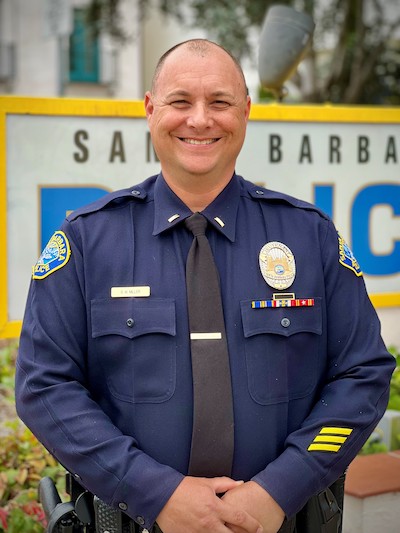 Lieutenant Brian Miller was born and raised in Paramount, California. He attended the University of California Santa Barbara, where he earned a bachelor’s degree in Law & Society and History. Hired by the Santa Barbara Police Department in 2005, Brian has worked in many assignments including Patrol Officer, Special Enforcement Team Officer, Narcotics Detective, and K9 handler with his partner Loki.  In 2012 Brian received the H. Thomas Guerry Award for Valor for his role in the apprehension of a violent fugitive.  Brian was also a member of the Special Weapons & Tactics team for eleven years, serving several different roles including FTO and Team Leader. In 2019 Brian was promoted to the rank of Sergeant where he has worked in multiple assignments including Special Events Supervisor, Patrol Supervisor, and the Training and Hiring Supervisor. 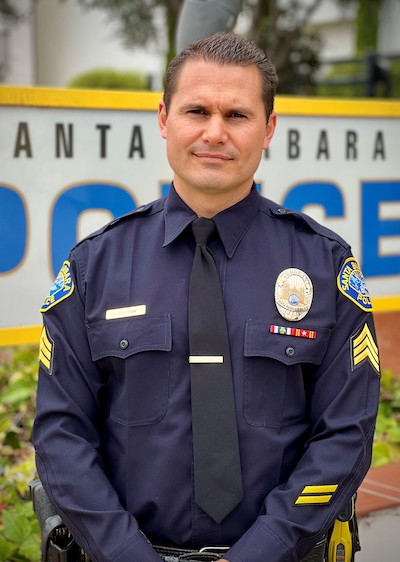 Sergeant Nate Beltran grew up in Oxnard, California. After graduating high school, he served four years active duty in the U.S. Air Force, receiving an honorable discharge at the rank of Senior Airman. Immediately after the Air Force, Nate was hired by the Santa Barbara Police Department in 2008, where he worked as a patrol officer for 4 years. His first specialty assignment was the Gang Suppression Team, followed by Field Training Officer, then was assigned to the Special Enforcement Team. He was selected as a Detective assigned to the Investigative Division in 2020, specializing in Narcotics and Gang Investigations. He has been a member of the Special Weapons & Tactics Team for the last 10 years as a Team Leader. Nate also obtained his bachelor’s degree in Criminal Justice Management in 2015. 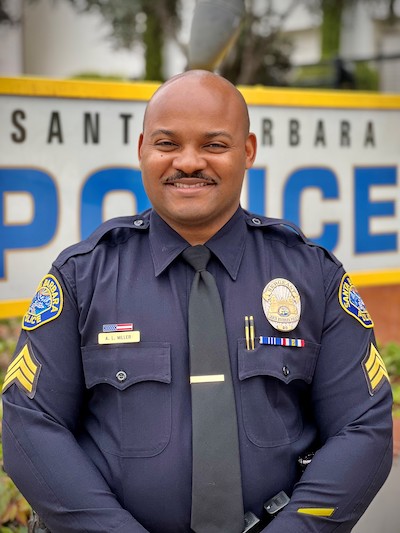 Sergeant Andre Miller attended Loyola Marymount University, Los Angeles. In 2007 he obtained a bachelor’s degree in Business Management and Human Resources. While attending Loyola Marymount, Andre was a member of their baseball team. In 2007, Andre was drafted by the Los Angeles Angels of Anaheim, where he had a professional career as a minor league baseball player. Prior to becoming a Police Officer, Andre was a Risk Manager for Koosharem Corporation and a professional baseball scout for the St. Louis Cardinals.  In 2014, Andre joined the Santa Barbara Police Department where he initially served as a Patrol Officer, and collaterally as a negotiator for our Crisis Negotiation Response Team. In 2018, Andre became a Detective in the Criminal Investigations Division, first serving the community of Santa Barbara in the Property Crimes Unit and for the last 4 years as a Detective in the Major Crimes Unit, where he investigated and led numerous homicide investigations. Since 2018, Andre has been an instructor at the Allan Hancock College Public Safety Training Center for aspiring law enforcement trainees in Lompoc.

Looks like a nice crew of officers. nice to hear things like this .They should be very proud Of themselves, because were very proud of them

I'm 'the pot calling the kettle black", but given the strenuous things they sometimes do, some would benefit heathwise and professionally from more time at the gym and less at the table. Are there work-out rooms at stations? The Fire Department could give them tips.

What strenuous things do they do? Meetups with the whole precinct at Chic Fil-A? Please.

It’s not like they are SWAT or national guard.

But seriously, congrats to these officers. I would hope that out of the pool they are the more deserving candidates for promotion.

LUVADUCK - seriously? "Veiled" body shaming? Come on. A little paunch on an instructor and a supervisor (not exactly field positions) means nothing. Heck, being a former professional ball player, even with a little belly that guy is probably still in better shape and more athletic than the willowy, IPA sipping, fedora wearing "model" men we see around town.

Congrats to all three of these guys! Don't mind the trolls, enjoy life and keep up the good work!

If I had meant what I wrote as an insult, it would not have been--as you saw it--" 'veiled' body shaming". Body-shaming isn't something that comes to <my> mind. Health does. "willowy......around town", on the other hand--what's that about? and what does beer variety have to do with anything?

LUVADUCK - I never said you insulted them. Saying "more time at the gym and less at the table" is exactly as I wrote.... veiled body shaming.