A midday meeting on Thursday on the tracks just off the freeway in Montecito was the scene of a multi-agency effort to coordinate the cleanup of homeless encampments in the city and county.

Sharon Byrne of the Montecito Association, County Supervisor Das Williams, Santa Barbara City Councilpersons Oscar Gutierrez and Kristen Sneddon, Hillary Hauser from Heal the Ocean, and Andrew Velikanje of Earthcomb were in attendance along with Cal Trans representatives and Fire Officials from both Santa Barbara and Montecito.

The gathering was to announce multi-agency coordination for the removal of homeless encampments throughout Santa Barbara County.  Cal Trans, Citizen Groups, Santa Barbara City and County fire, police and sheriffs are now working together to combat what has become a whack a mole exercise for public agencies. If the City sends a crew out, the camps move to County property, then to Cal Trans property, and so on.

It remains to be seen what results from this collaboration will do to remedy what has been deemed an intractable problem. The Loma Alta fire below TV Hill on May 20, 2021 provided a hard to ignore sign that added urgency to political leadership in solving the danger of homeless encampments throughout the county. Many feel this is the first step in ending the "not my jurisdiction" discussion when approaching the encampment issue.

The outstanding work of Andrew Velikanje with funding from Heal the Ocean and the Montecito Association in cleaning up camps across the county has been an unheralded but startlingly efficient project. Visit the Heal the Ocean site for more on the progress so far as well as interactive maps. 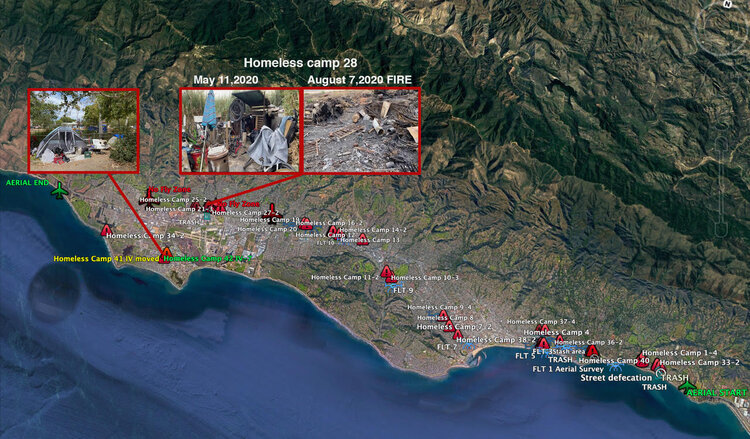 Map of local homeless camps by Heal the Ocean

SB is their home!!

They should also tour LA, SF, SD downtown areas and see where we could be headed. Million Dollar condos surrounded by tent cities on the sidewalks. We are beyond the tipping point. The state of our cities is a Global embarrassment. I can offer no answers but something drastic needs to be done. This is a time to leave your politics at the door and make unpopular decisions.

Rypert J called it right. Toss all the money you want to throw at this deal and it’ll just keep on evaporating until you get what he’s saying here.

It’s not easy to be the parent, but when adults start acting like children it’s time to handle it and they don’t get to do whatever they want anymore.

It’s because for very dollar we spend on them it’s a dollar less we can’t spend on kids, our youth, our future, and their education from the start.

And that’s exactly why I think California's education system is absolutely in the tanks. We’re wasting massive, and I mean MASSIVE, tax dollars on the kinds of ideas and programs that some of the above Edhatter commenters would advocate.

Money doesn’t grow on trees, folks. Even here in CA. You’re fooling yourself if you think the solution is to give them a dollar at the stop sign, house them in a converted hotel, or build a bunch of mini-homes for them to live in.

Nobody’s going to round em up. But if you keep making it easier and easier to do what they do, it’ll keep getting worse.

its odd, we have working "lower class" citizens that would LOVE a hand out to help them get a leg up and get better off. But you have to be homeless to get THIS help........

sounds like we are attacking this problem from the wrong side. I know quite a few small families that would be super happy to have a couple of weeks free rent subsidized for them.

And sadly those same families are one to two paychecks away from qualifying for THIS help. why dont we stop the homeless we can, BEFORE they become homeless?

Basicinfo805, thank you for the support on what seems to be an unpopular decision by a largely vocal minority in our community. Then again, with the do-good crowd, the truth and facts be damned and at the end of the day internet virtue signaling is what will solve the problem in their eyes.

Look at the mess where the 154 meets State Street. Horrendous. How is this even allowable? I will tell you. The do-gooders, they have insulated themselves with a political agenda or inclination hidden behind a false sense of compassion, so disasters such as what is littering that area are allowed to continue.
The interesting fact to this is the hypocrisy exhibited by the do-good crowd. Individuals like the person(s) making that mess, they are littering. Littering is an environmentally disastrous activity, but in the name of the false compassion, it is allowed to continue. By the way, the do-gooders, they claim to be environmentalists. I'm a little confused.
They will go after the tax paying, hard working person's ability to get plastic grocery bags because those are environmentally unsound, but individuals such as the one making the mess on State Street and the 154, a "protected species" in their eyes as a result of false constructs being spoon fed to them by supposed "experts" on the matter of "houselessness" and such.

One way to describe these individuals illegally making these messes around town and illegaly camping or setting up structures is a "privileged species" because they are given every excuse imaginable to continue on their path of destruction.
I have to say that it is a destruction intended toward us, as hard working tax paying people. Since we can fend for ourselves, we are NOT a privileged species and if ANY of us try to do the same, expect fines, citations and possible jail time.

The supposed "reason" why some of these individuals can't "fend for themselves" in many cases is attributed to drug addiction, supposedly a disease.
Now, with that said, drug addiction is a horrible thing, I wouldn't wish it on ANYONE, but it is a result of bad choices. The reason I say "bad choices" is because, just like tobacco, there is tons of data, information, actual real life examples of what drugs such as meth, heroin or fentanyl do. The facts ARE available.
Yet, some individuals opt to put those substances in their bodies. Again, damn the facts and truth, but in the end they then become a supposed victim. But that victimhood is of their own doing.
We ALL have that genetic predisposition to become addicted, but many of us choose to NOT partake in such destructive behavior. Where is OUR support system? I forgot, we're not privileged.
Yet, we ARE expected to take care of the privileged self-made victims by allowing them to carry on in their behavior which is not only destructive to themselves, but their family, friends, neighborhood and community.

The ironic part to all this is the do-gooders want us to accept these "houselessneighors" as "equals" and while that is cool in theory, it is hypocritical, as they also want us to give them a free pass on their behavior and this amounts to privilege, a privilege none of us here, do-gooder or not, have until we become victims of our own doings. See the problem?

So sure, some will call this hateful. So what? Do I care? No and that is because if you're speaking facts and truth, there is nothing to worry about.
By the way, the tide IS turning, more and more people in our community are starting to speak as I'm doing with the same tone.
People are tired of the do-gooder attempts to shout the voices of reason down and their threats of online social shaming. In time, you will see a turn toward reason. The do-gooders, they will stay the course, but they will be even less than they are now. Keep in mind, they are NOT the majority in society and communities, they are just adamantly loud and disruptive. They are far from progressive too, nowhere near that.

Again, thank you for exhibiting that reason I mention and I apologize in advance for the long responses, this is an issue that can't be discussed in a couple of sentences or paragraphs or with a meme, popular tactics of the do-gooder mentality.

A Sheriff's Deputy resuscitated a man found lying on the sidewalk in Old Town Goleta on Monday evening.

The Association for Commuter Transportation recognized Peter Williamson of SBCAG Traffic Solutions division as the 2022, 40 Under 40, recipient at an annual event that took place in Atlanta.

A 400-acre prescribed burn off Figureoa Mountain Road will take place this week.

Thanks to our agricultural past, Goleta has lots of beautiful old farmhouses hidden away in little nooks and crannies.

A Legacy of Research

On December 9th and 10th, the City of Santa Barbara will host workshops at 821 State Street for members of the community to help create design concepts for the project area.

A hybrid vehicle caught fire in Los Alamos and destroyed another vehicle on Monday morning.

The Santa Barbara Channelkeeper reports the public is invited to voice opinions on the City of Santa Barbara's Cruise Ship Program.