With a panel of community leaders, they discussed plans to prevent youth gang violence, domestic violence, and the spread of the viral infection in the homeless population.

Murillo stated there has been an increase in youth street violence even before the pandemic but it's been made worse by teens losing the structure of their school schedule, being forced to stay at home with families under financial pressure and possible violence, and being limited in recreational activities.

"The city is engaged with a community-based effort to help disadvantaged youth at this time when their school and recreation routines are disrupted because of the pandemic," said Murillo.

A new program titled "Youth Responders" will focus on at-risk youth between the ages of 11 and 19 years old and provide new vocational skills, teach discipline, and give teens a sense of purpose. The program is being administered by the Resilience Institute and is planned to launch later this week.

Additionally, the community recently adopted and began implementation of a Youth Safety Partnership Strategic Plan focused on youth violence prevention, intervention, and suppression, which are all important strategies for successful violence reduction.

The program also hopes to develop strategies to improve access to mental health services to youth and their family, place young adults in vocational training programs and jobs, and build community engagement through outreach and awareness strategies. 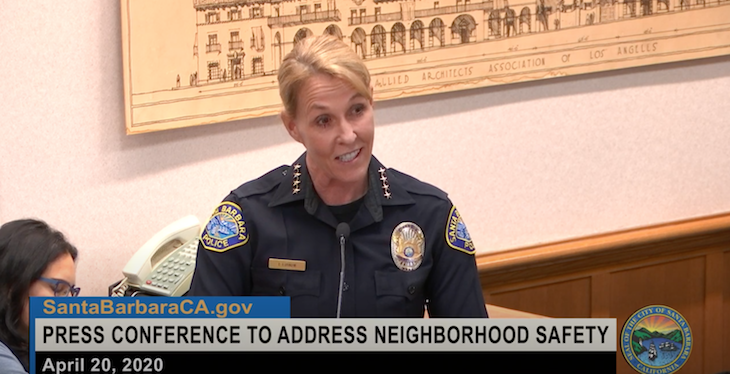 Santa Barbara Police Chief Lori Luhnow confirmed her department is fully staffed and her employees go through self-health checks daily while socially distancing within their own workgroups. They have expanded street enforcement, adopted highly targeted suppression initiatives to focus on crime hot spots with increased visibility, and work to disrupt gatherings and violent activity, she said.

"Now is not a time to relax general safety practices [outside]. There are still people trying to take advantage of the fear and uncertainty in our community.... we have seen an uptick in violence since the stay at home orders were put in and this is definitely a time where people who prey on the community do not get a free pass," said Luhnow.

Although there has been a statistical increase in crimes, the numbers are still fairly low. Compared to this same time last year, robberies increased by 20% from 10 incidents to 12 while aggravated assaults increased from 28 to 31.

Luhnow also cautioned people to look out for domestic violence. "It's a crime the focuses on power and control at its core and we recognize that when people are scared they're often isolated more than normal," she said. Domestic Violence Solutions is a local nonprofit that operates a 24/7 crisis hotline for anyone who needs it at 805-964-5245.

Additionally, Officer Gutierrez with the Santa Barbara Police Department confirmed there are two officers assigned to make contact with the community if there are any types of gatherings, especially in parks and homeless encampments. He stated their full-time job is to warn people, provide education, and pass out fliers.

Mayor Murillo reassured residents to report a crime in their neighborhood if they see anything suspicious. She confirmed their name will not be revealed and their immigration status will not be asked.

Laura Dubbels, Housing and Human Services Manager, discussed the current status of the homeless population in relation to the spread of COVID-19.

According to guidance from the Centers for Disease Control (CDC), it was advised not to clear homeless encampments during the pandemic. Instead access to portable bathrooms and handwashing stations were recommended. The City of Santa Barbara has followed the guidance and posted portable bathrooms and handwashing stations throughout the downtown area. They've also partnered with "Showers of Blessing" to provide sanitary showers twice a week, said Dubbels. 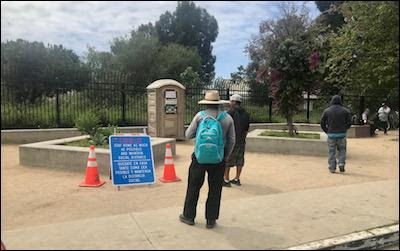 Starting this week a new program coordinated with SB ACT called the "Community Food Collaborative" will invest in local restaurants and food suppliers to prepare and distribute meals to the unsheltered population twice a week for eight weeks.

In terms of housing, the county is following Governor Newsom's leadership under "Project Room Key" to provide shelter in non-congregate settings such as hotel rooms for the homeless. On Saturday Newsome announced 11,000 rooms had been secured throughout the state and Santa Barbara County has 68 rooms available.

Individuals must be COVID-19 free to receive a room. The facility does not allow in or out privileges, has 24/7 security, and includes supportive services, confirmed Dubbels.

Homeless individuals who test positive for COVID-19 will reportedly be quarantined in one of the hotel rooms.

City councilmembers Alejandra Gutierrez (District 1) and Oscar Gutierrez (District 3), no relation, announced a plan to bridge the communities on the east and west sides of town. Their "One Community Bridge" program plans to focus on sustainable changes for youth and working families. More information on this program will be revealed at a later date.

The full press conference can be viewed here.

If these people can hold their meetings, press conferences etc without wearing masks or other ppe and using social distancing, surely other businesses can do the same while using gloves and masks.

gloves are actually a great way to infect people if they are not very well trained and meticulous about their don/doff procedures... be very careful about what you suggest to 'the public'

There was an armed robbery according to Edhat on 3600 block of State the other day no other mention on the news etc. let the public beware and informed -Police chief do your job or get a new public information officer

well what did they expect letting criminals out of jail

oddly no mention of the horrific murder just a couple weeks ago on the westside, of a mother by her daughter; that is, in fact, domestic violence- probably with influence of mental health or substance abuse issues; I've been struck by the lack of follow-up on that murder, by the press

@7:35 What else is there to say? A horrible tragedy happened in someone’s private home. How is it any of your business? Have some respect for family & friends who have lost a loved one. One is dead the other is in jail. I’m curious as to what follow up you are looking for Mrs Cravitz?

That’s nice. The street will be “safe” while be people are starving in their homes (if they still have one!) due to this economic sh$&storm.

Well, regardless of whether

A magical place! Back in

Watch who is in our local and

The bigger the government,

Looking at you Goleta school

Sure is different than the

I've lived in town my entire

RHS: what you say makes such

I think I misunderstood your