The daily service will depart from SBA at 11:20 pm and arrive at ORD at 5:20 am local time. For Santa Barbara area residents, it will be the most time-efficient nonstop service available to the Midwest with connections to more than a hundred destinations in Europe and the Caribbean. The route will be served by an Airbus 319, with the capacity of up to 128 passengers.

“We are honored that United Airlines has chosen SBA for new service via its Chicago hub,” says Airport Director, Henry Thompson. “Whether for business or leisure, we encourage everyone to take advantage of this service. It’s a great way to spend a full day in our beautiful city and arrive in Chicago, or on the East Coast, in the morning rather than during the evening rush hour. This nonstop flight will also shave hours off the typical routes via Denver, Los Angeles or San Francisco.”

“We are thrilled to offer our Central California customers with nonstop service between beautiful Santa Barbara and United’s hub in Chicago,” said Janet Lamkin, United’s California President. “United’s new service to Chicago will connect Santa Barbara to more than 40 destinations across the Midwest and East Coast.”

Rumor has it a new nonstop destination will be added to Santa Barbara Airport (SBA) and it's about to get a little windy.

An eagle-eyed reader sent us this clue from SBA's Facebook page where the post states, "We've got a BIG secret to share on Monday... It's no ordinary nonstop! You'll be seeing red, but don't be shy. Tag a friend, share our post, we want more followers to join our friendly confines! On Monday, you'll see why..."

Other commenters confirmed United Airlines unveiled the new destination during a media event on Friday as Chicago, Illinois. 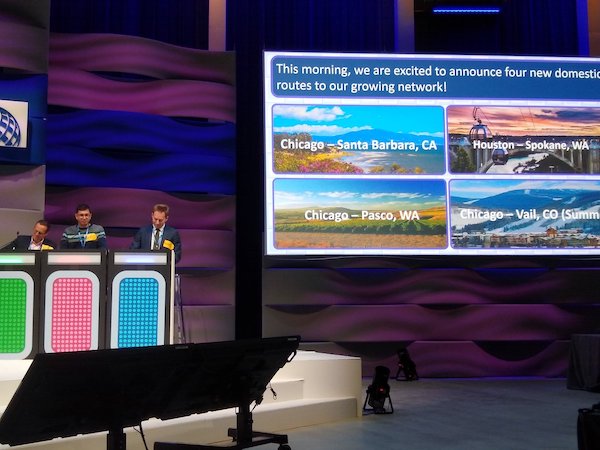 Santa Barbara Airlines is expected to make an official announcement on Monday.

I am beyond ecstatic about this new service! I love flying direct from SBA and I think this flight will be a winner!

Oh good... ORD: one of the only airports I always avoid when having a layover.

SBA to SLC to ORD was a good connection many years ago.

Santa Barbara Airbus works great and you can get almost anywhere, usually ontime, from LAX.

Amen!
Also to add who likes to sit in a cramped bus, yes, it is cramped, and then arrive at the airport where you're eventually going be sitting again for a long time probably not in your favorite chair while on the plane? Not I!

UAL: Usually Awful & Late. But sometimes you must take what you can get living in the "boondocks" as we (apparently) do in this time of airline hubs--not planning to move to Los Angeles, Phoenix, Las Vegas, Atlanta, NY/NJ any time soon!

How about MORE, daily, non-stop flight to LAX and even a few to San Diego?

Does anybody else out here in EdHatVille feel that way too?

United had flights between Santa Barbara and Chicago through most of its history believe it or not. And once they made the switch to jets, they were mostly nonstop flights. And American used to fly directly to Dallas every day (and for a brief time in the eighties direct to Raleigh NC). As for who wins the “worst airline” award, that’s a highly competitive contest. This year, American has reclaimed the bragging rights from United.

Unfortunately United has become the worst service airline in the US. Considering O'Hare's problems as well people should not expect punctuality in this new service. The Chi to Den to SBA connection has been reliable and the Denver airport is a nice place to layover for a decent airport meal. But it is understandable that folks would like to save a few hours on this trip.

In addition to Roger and myself, there are many Santa Barbarans who have gravitated from Chicagoland area. And historically there've been Armor's, Mc Cormicks, and more.

This is officially bookable on United's website. United mainline service on a A319.

Summer red-eyes are extremely popular to ORD. This route likely wouldn't be possible without a red-eye because of the limited plane availability as the MAX is still grounded, and further this allows growth while utilizing existing aircraft overnight instead of parking at a game until morning.

And if you needed another hint the "don't be shy" is probably alluding Chi-town, short for Chicago.