Last weekend my husband and I went with another couple to the San Marcos Foothills Preserve to enjoy a beautiful sunset. We parked and walked, masked and distanced, into gently sloping boulder-strewn fields until we found a perfect rock, where we set up our chairs and sat together as the sun went down. We watched as the sunlight on the wide-open fields changed from sunny tan to a warm golden color, and finally to a red “alpenglow” as the sun set.  We beheld this stunning reddish glow reflected all along the cliffs of the Santa Ynez Mountains that form the scenic backdrop to our town. Dusk came, and then darkness...

And then, suddenly, as we sat in the darkening night, the owls began to emerge from some nearby oak trees on their night-time hunts. It was beyond spectacular to see how fast and silently they flew and to watch as -- one after another -- they dived straight down toward their prey, then rose within seconds to fly back to their nests. I realized, too, that "our" boulder was providing safe haven for the little creatures whose diggings around the bottom of the rock. 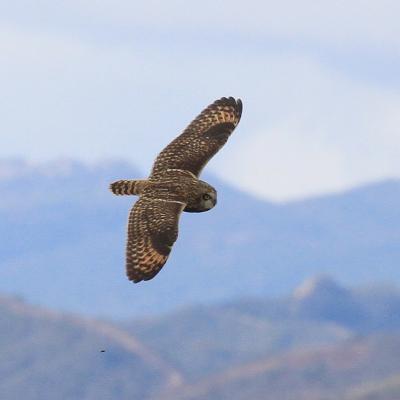 As the stars began to come out, I contemplated the shadowy shapes of the boulders lying here and there in the fields around us. And I realized that the importance of this beautiful open space consists not only in the grassland ecosystem it supports, but also in the dynamic geologic history that it records. Because the boulder fields of San Marcos Foothills are the signature feature of the huge San Antonio Alluvial Fan – an unspoiled remnant from a very different geologic time.

This alluvial fan - a high mesa-like structure nearly 300 feet thick and some 3 miles long -- was deposited in a series of gigantic debris flows that would make the Montecito debris flows of 2018 look tame indeed. And it is only one of many others along our coast.

Like the others, the San Antonio debris flows were powered by the torrential rainstorms of the glacial ages.  The deluge of those storms dug the cliff rocks loose and brought huge slugs of earth material roaring down the mountain in catastrophic episodes.  All that material – sand, mud, water, and boulders – came to rest on the coastal plain, where it spread out in a large fan-shaped structure thousands of years ago, and where it remains today. 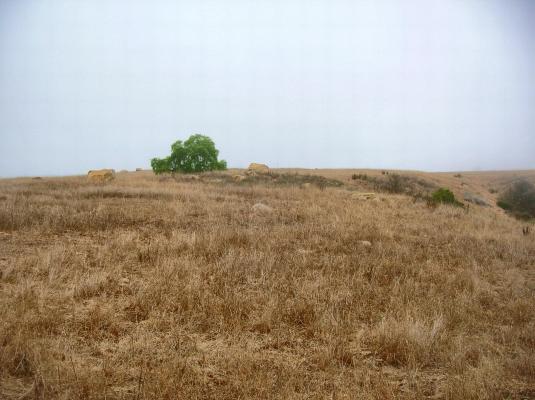 Many of our local alluvial fans have been bulldozed and developed one way or another.  Amazingly though, San Marcos Foothills' boulder fields still retain the shape and much of the intact composition of the original super-catastrophe that formed them.  Measurements of some boulders near this particular fan remnant are considered to be about 100,000 years of age by UCSB geologists.  Clearly, the San Marcos Foothills offers a precious and intact piece of our local geologic story.

You can see a nice cross-section of the San Antonio Fan deposits in the road-cut of Highway 154, just south of San Antonio Creek, but don't look unless someone else is driving! Farther east, many homes on the “Riviera” are built on the Rattlesnake Fan, and a few remnant boulders lie near the Riviera Theater’s bus stop.

…..Finally, night had come and it was time to go. I paused, humbled by the gift of raw natural history offered by these Foothills.  I was thankful for the majestic mountains that provided the boulder where we sat, and for the little creatures whose entrance diggings led to their homes beneath.  As we left, I carried with me the silent symphony of the owl hunts. And I'm thankful to Channel Islands Restoration for leading the effort to obtain and preserve this unique open space.

If you would like to support the campaign to buy and protect the undeveloped portions of the San Marcos Foothills, please visit this site.

Gorgeous, and even more reasons why we need to SAVE and PRESERVE this precious land! The very LAST think Santa Barbara county needs is another mcmansion and more wealthy people!!!! Let's get this going, people! Let's SAVE THIS AREA for all to enjoy, not the least of which, all the wildlife that make their homes there.

Wow! Thank you for this.

This essay encapsulates beautifully everything that I love about the San Marcos Foothills West property. The geology serves to put our human lives in perspective, and the descriptions of the owls, other wildlife and the sunset reminds me that I am only a small part something much larger. What hubris to think that homes could somehow make the perfection of what is there any better.
Thank you, Ms. Bartz. Your writing and the photographs were a blessing in this crazy world. I honor and appreciate your ability to transport the reader so gracefully to that truly spectacular place.

You are right, the photo is of a short-eared owl and the photo was taken by Mark Bright, not Steve Colwell. None of this is the author's fault. It is my fault for supplying her the wrong info, and she is trying to get Edhat to make a correction. Check out Mark's Instagram account for more cool bird photos: https://www.instagram.com/mark_r_bright/

Beautifully written. I was transported by your description. Thank you.

Don't forget to thank The Chadmar Group. They generously donated over 200 acres of land in a deal that allowed us access to this land. They could have just as easily fenced the whole place off and prevented any access until they developed there portion.

Be careful Sail. If Santa Barbara was already "discovered" and built thanks to the native populations. It would have remained a beautiful and untouched place for many generations if they were not displaced.

Sail, what seems more desirable to you, Santa Barbara before the spanish arrived, or SB now? Hawaii before Cook arrived, or Hawaii now? Given our teeming masses, development is inevitable, but maybe we can figure out a way to keep some paradises from being paved over.

SAIL380, NO, let's NOT build it. As a 4th generation Native Californian, I want that land preserved as open wild space for all of posterity... for the kids, my grandkids, the wildlife, the people of Santa Barbara County. For the many, and not just the few. The last thing we need is another McMansion! Ughhhh. You must NOT be from here originally, or you'd want to preserve open space too.

It wasn't the chadmar group that generously donated the land back in 2005. They stepped in after that deal was done. I believe the developer's name was Berbant, though I am not positive.

Pitmix is right ... quid pro quo is not the same as generosity.

I understand how capitalism works and so do the property owners. They negotiated a fair deal and were given permission to develop there property. Now its time to earn there money from the investment. Capitalism is not a dirty word, it built Santa Barbara. Just think of where we would be if Richard Henry Dana never sailed into here. Potter never build a hotel, Stearns never built a wharf and Fleischmann never built the harbor all because of the NIMBY crowd.

Were not generous at all. That's how they got the rights to build the McMansions. Do you really think they would opted to not build on those 200 ac all on their own? Maybe you don't understand how capitalism works.

Beautiful. Thank you for it. I, too, hope that the Ch. Isl. Rest. is able to raise the money to buy and preserve. They are a wonderful organization.

Nicely written. I believe the boulders in Rocky Nook Park are also remnants of the debris flow that created the Rattlesnake Fan .... https://www.news.ucsb.edu/2001/011526/ucsb-scientists-study-ancient-debris-flows.

Interesting observations and tie to geology. Thank you!

That owl looks like a short-eared owl, great find! They're not too common around here.
Beautiful place, beautifil photos.

MiniBeast yes, as I said ,yellow is diurnal and during breeding season hunt all day long. However in the winter as will be coming up short ears prefer low light and around dusk which would be crepuscular like orange eyed when only at those times. Short ears here are Burrowing, Short-eared and Western Screech Owl although the later 2 are rare and uncommon.

Great shot of a very cool bird, I paced a Pueo as it's known by it's endemic sub species while heading up Haleakala in Maui. They are endangered in Hawaii now and rare in Fall and Winter here. We've seen one off and on on More Mesa including Feb and Mar of this year. Easy to see since they are diurnal, yellow eyes, and can be seen at dusk or dawn.

Kept researching images, because I thought that that Barn owl was misidentified as such. We have Short-eared owls around these parts? Fantastic. Thank you, A LITTLE BIRDY, for the info and i.d.

Yeah just look at at what

Lots of hate in the deleted

The ambassador program is a

I would hire you for the nice

I believe this is/was in