Recently, a bottle collecting friend was kind enough to give me some beautiful old Goleta bottles. One of them was from the San Marcos Dairy, which has been on my short list for a while since another historian friend, Adam Lewis, had asked me to figure out where exactly it was located.

We had seen this ad from the 1939 Goleta directory, but it gives no clues as to location.

Adam had sent me this beautiful photo of the San Marcos Dairy from 1932.

It’s a great photo featuring the smiling faces of the families involved in the operation. 5 men, 4 women, a few kids, horses and cows all posed happily for a group shot.

Somebody paid big bucks to get the boys from West Coast Photos all the way up from Long Beach for this shot!

The caption named the owners, but we still needed to know where this photo was taken. The name, San Marcos Dairy, was a clue, but this doesn’t look like the San Marcos area….so we started searching.

Right away, we found this 1990 Santa Barbara News Press article about the San Marcos Dairy!

Excellent local historian, Justin Ruhge, beat us to the story it seems, providing great detail. Justin states that the dairy was located on the Delco property, which is now Flir. He mentions the owners and the photographers and that the dairy had about 100 cows. He gives us a clue about exact location in the last paragraph, when he says all that remains are the trees that once surrounded the house.

But one thing that he doesn’t mention, why does the milk bottle say “Campbell Ranch” on it? Ruhge insists the dairy is on the Storke Ranch. Hmm, further digging was required…. 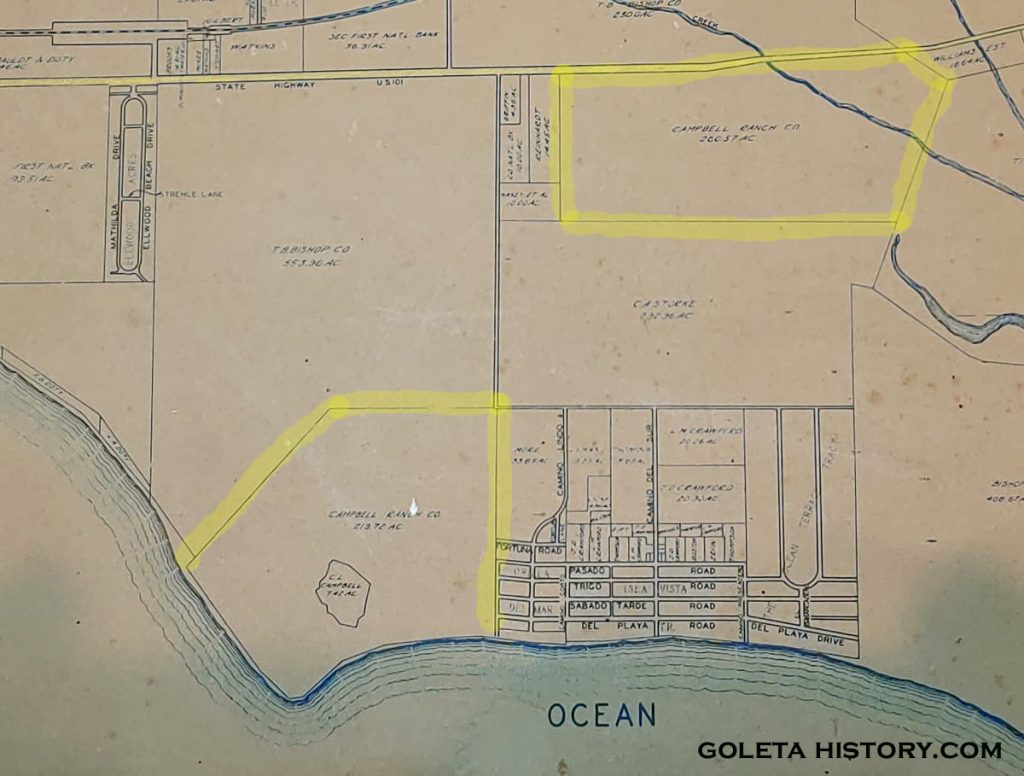 Clearly, the parcel by Hollister Avenue would be the one the dairy would be on. The Storke property can be seen just south of it.

This 1928 photo is the earliest we have of where we think the dairy was. The white arrow is the old entrance to the Bishop Ranch, now called Coromar Drive. The red arrow is where we believe the San Marcos Dairy was.

In the 1935 photo above, the yellow line is Storke Road, the top arrow is the Coromar Drive entrance to the Bishop Ranch, the middle arrow is what we think is the dairy location and the bottom arrow shows the Storke Ranch buildings. The red line is the dividing line between the Campbell property and the Storke property. Putting the San Marcos Dairy clearly on the Campbell Ranch.

This 1938 photo shows that same clump of trees we believe is the San Marcos Dairy.

This photo from the 1950s shows a freshly built Delco,(Flir today), the old entrance to Bishop Ranch, Coromar Drive, and the dairy trees.

Another angle from the 1950s shows the Flir building and the black arrow shows the dairy trees. Also, the white arrow shows a line of trees that seems to be planted along the Storke property line.

Here’s that same tree line on the Storke driveway in yellow, and an arrow on the San Marcos dairy. Why is this interesting?

Because if you look closely in the dairy portrait, you can see the line of trees in the background, off in the distance…

This 1960s photo shows Coromar Drive has been paved south of Hollister, heading for our dairy location at the black arrow.

So, today the location of the San Marcos Dairy would be at the white arrow, south of Deckers. 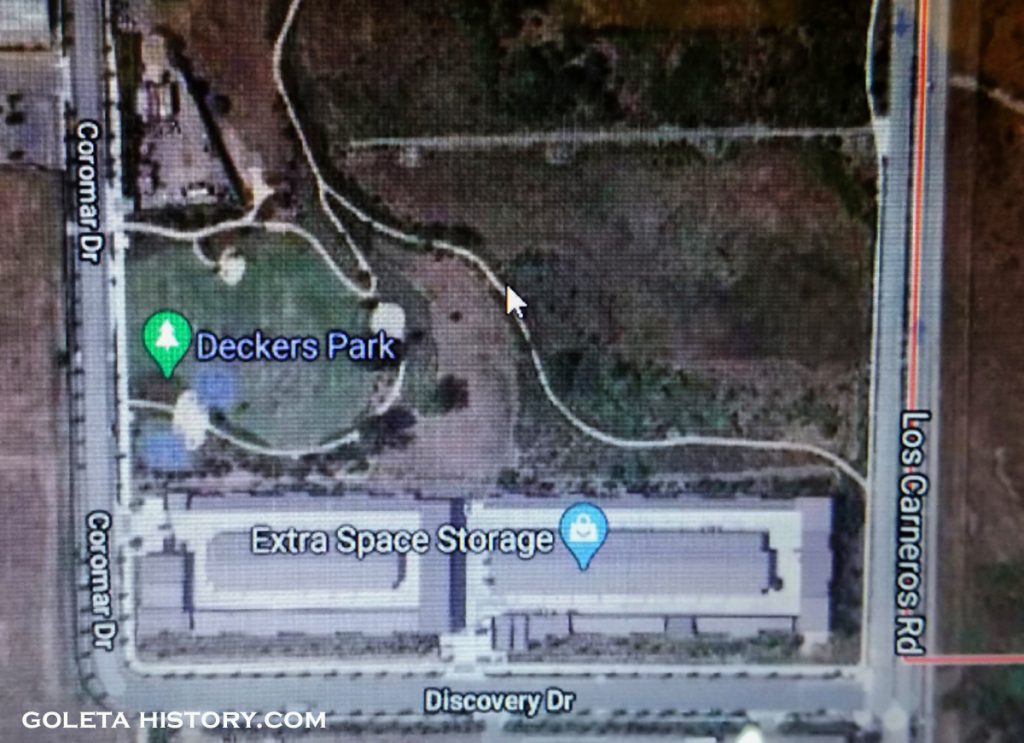 At an open space with big, old trees, that is now called Deckers Park, still on Coromar Drive.

We ventured out to have a look and found several beautiful old trees on an open grass area, preserved for Deckers employees to unwind and take their minds off footwear for a while.

Deckers has thoughtfully placed some plaques around the open space with assorted information, and one of them has the above image, showing the location of the park. Right where the dairy was….

So, we think it’s safe to say, the San Marcos Dairy was located at Deckers Park. If you look out towards the slough at this angle… 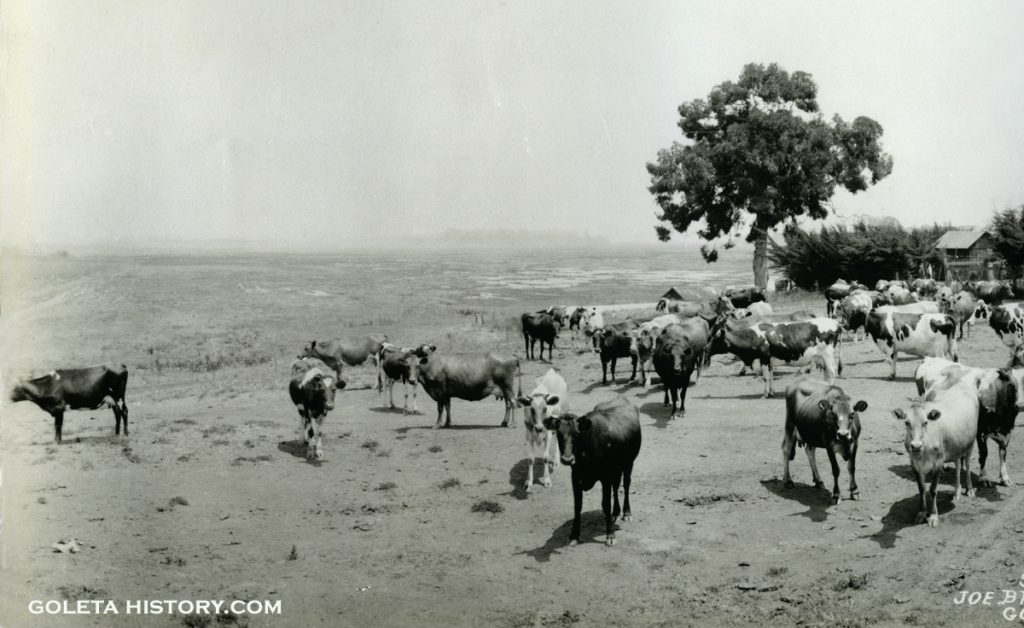 It looks very similar to the view in that direction in 1932.

So now we know where this dairy was, but why was a dairy in western Goleta called San Marcos Dairy? That’s where our friends at the Santa Barbara Genealogical Society came in….

This handsome young man is Tony Brombal with his beautiful bride Mary. In 1910, at the age of 16, Tony immigrated to the United States with $20 in his pocket. After moving around the western U.S. he landed in Santa Barbara. Tony lived for a while in a tent near Hope Ranch Lake, where he helped plant palm and pine trees along the road to Hope Ranch and he milked cows at the Hope Ranch Dairy where Vieja Valley School is now located. Later he built stonewalls in Mission Canyon and worked on the San Julian Ranch near Las Cruces. Mary worked at the Enterprise Laundry, which was recently the Fish Enterprise Restaurant.  She was 17 when she met Tony and they were married in 1916 at Our Lady of Sorrows Church.

The happy couple had three kids and lived in various locations around Santa Barbara. In 1923, the young family moved to a property off Old San Marcos Road and started a Dairy. Tony named it……San Marcos Dairy. They ran the dairy for a few years and then they sold it to Tony’s cousin, Giuseppe Brombal, for $12,500. Giuseppe moved the dairy to Goleta, but kept the name San Marcos Dairy.

That cute little baby, Margherita Ziliotta, is still alive today and she’s now Rita Zandona. She met with Adam Lewis and identified almost all these folks. Giuseppe or “Joe” Brombal, the man that moved San Marcos Dairy to the Campbell Ranch in Goleta is fourth from the left. In the 1941 Goleta Directory, it lists Gino Bavaresso as the owner of the San Marcos and Montecito Dairies, so either he became a partner or he bought these guys out.

Rita was also able to identify most of the buildings in the 1932 photo.

The family house on the right is where Rita was born about a year before this photo was taken.

Adam Lewis found the only two folks Rita Zandona wasn’t able to identify in the 1930 census.

That’s Giuseppe’s wife Angelina and their son Edo. We also learned that Giuseppe was born in Brazil while his father worked there in a coffee plantation. Giuseppe moved back to Italy before coming to California and taking over his cousin’s dairy farm at San Marcos.

Justin Ruhge writes that the dairy closed due to the Marines confiscating land for the new air base. This map from 1942 confirms that fact. The blue line shows where the Marines drew their new property line, splitting both Campbell Ranch and Storke Ranch in half. However, Rita Zandona states she lived on the working farm until 1943. That year they finally had to close because the Marines had confiscated most of their crop growing land, making it too expensive to feed the dairy cows.

Another mystery is why after the Marines left, Storke got his land back, but the city of Santa Barbara ended up with half the Campbell Ranch! So many questions, so little time….

A lot of interesting history in one little bottle. Thanks for your generosity Char.

Thank you for sharing this history. I enjoyed the journey.

Interesting! Thanks. Perhaps Paul Brombal who had the coin and jewelry shop is a descendant of the dairy family.

Nice! Talk about a rabbit hole and such an enjoyable one to visit at that. Standing ovation to you Tom for the wonderful weaving of the story with such great photos as always. Hats off to Adam and Justin too. I frequent Deckers Park and love the vistas it provides. Signposts about the history of the area that Deckers installed I've always thought were very cool. Often, I bring visiting friends up there to show off Goleta. (From lizards to landing gear wink, wink). Now I have more background to talk about when we walk the paths. You've made these dairy farms very interesting by highlighting the varied journeys taken by the two families who owned the properties... the privileged and the immigrant.
Note to Ahchooo - I was thinking the same thing about Paul Brombal.

Thanks for all of the research, Tom!

Always love learning more about our local history - especially when accompanied by photos & maps. Thank you for sharing the results of your curiosity & talents!

Tom, about 20 years ago I was on a construction site in Santa Barbara where they were digging footings. The backhoe dug up a glass bottle, I picked it out of the dirt pile and cleaned it up. It is an exact match to your bottle. I took it over to Mike Imwalle at The Santa Barbara Trust for Historic Preservation. He said he was doing some research on the San Marcos Dairy and told me of the location you described. Of course he did not have the level of detail that you have on the history of the dairy and the families that ran it. It might be interesting for to contact him and see what other information he might have. Excellent research, really helps me appreciate my bottle and it’s history.

Wonderful parallel history story; I hope you talk it over.

Thank you Tom, more great work that is really appreciated.

(Grew up in same neighborhood and school as Steve & Paul Brombal; I too am curious. Dad Angelo was very friendly, his wife too.

Paul is a bit of an odd duck. I wish he were more accommodating to local people.

The Filippins are my aunt/uncle. And Gino (all deceased).
I believe Gino once told me the picture was taken by corner of Los Carneros and Hollister, appears to be facing toward airport...but cannot confirm. Tom, I have to see if I can contact you with more on them. I have a book from their home town with geneaology. Also, have you seen Erin Graffy's booklet on "the Italian Renaissance in Santa Barbara".

On the positive side of this

As for the new housing, many

The solution is simple - each