SafeLaunch, a local nonprofit founded in 2010 with a mission to prevent addiction, hosted the event at Signature Flight Support's main hangar at the Santa Barbara Airport on August 31. The event gave grieving families and friends a place to come together, speak openly about their loved ones, ring a WWII Navy bell in their memory, and paint their loved one’s name on a special Cessna 182, named 521DJ or simply "DJ." 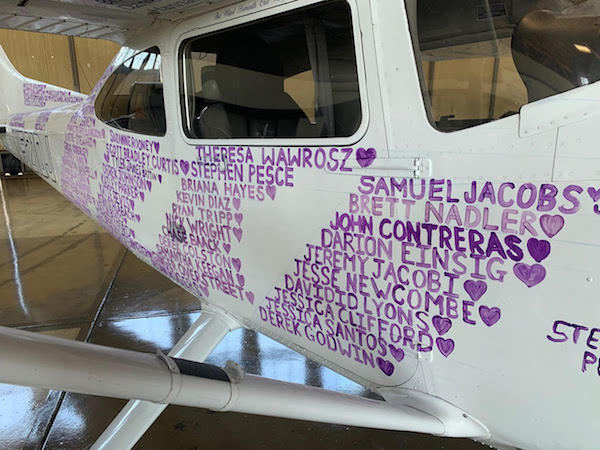 “On the rare occasion when a commercial aircraft goes down, the disaster is reported on for days, weeks and months. Today and every day we lose 200 young people to drugs… and yet, hardly anyone blinks. The drug crisis is a 100% preventable disaster akin to an airliner crashing every single day of the year. I donate my plane and my time because I believe that each of us, in our own way, has a role to play in protecting youth from this insidious brain disease that far too often results in death,” said DJ's owner, veteran Navy pilot and SafeLaunch co-founder Commander Ron Cuff.

Overdose Awareness Day events were held around the country to remember loved ones and raise awareness about the drug epidemic that is killing 200 young Americans every day.

“Together, we can save lives but first we must be able to talk openly about substance use disorder,” said Janet Rowse, co-founder of SafeLaunch. “We must understand that 9 out of 10 people suffering from a Substance Use Disorder were exposed to alcohol or other drug before age 18, making it imperative that education leaders create and enforce 'Drug Free' campuses… and for parents to insist they do. Research from the National Institute on Health shows that a 14-year old’s brain is up to 600% more susceptible to developing chemical dependency than a mature adult brain. Without the intentional support by education and community leaders to prioritize children’s health, parents cannot effectively protect their children from this disease.” 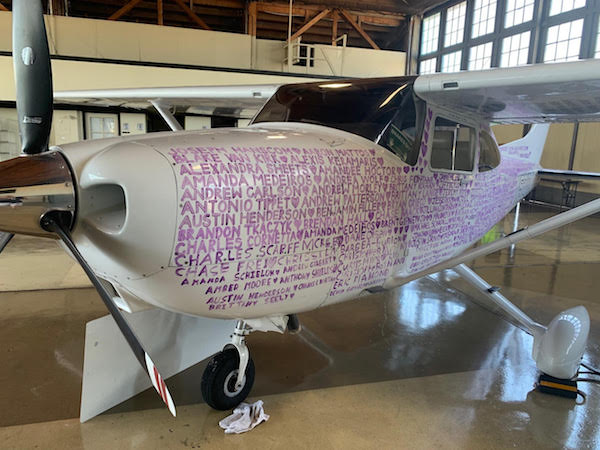 Families brought photos of their loved ones lost to addiction that were on display. Attendees were then invited to watch the aircraft take off for a loop around the Channel Islands.