On September 8, 2021, around 10:40 pm, Santa Barbara Police Combined Communications Center received a report from a concerned community member about a suspicious subject that was on the roof of a local jewelry store located in the 600 block of North Milpas Street. The subject was dressed in all black clothing and wearing a black ski type mask.

The community member reported they could see a subject using power tools to cut into the rooftop. Numerous Officers covertly responded to the area to provide containment and set up a perimeter to prevent the suspect from potentially fleeing. Santa Barbara County Sheriff Office responded with a police K-9 to assist.

The business being burgled has a large roof top that conjoins several other businesses in that block. The suspect, Joel P. Morelos Jr., a 37-year-old Santa Barbara resident, learned of the Officers presence and started running back and forth on the large roof to flee from law enforcement. During this time, Morelos was able to partially gain access to another local business through a large rooftop air vent in an attempt to evade. Officers were able to gain access to the roof and after a short rooftop foot pursuit apprehended Morelos. 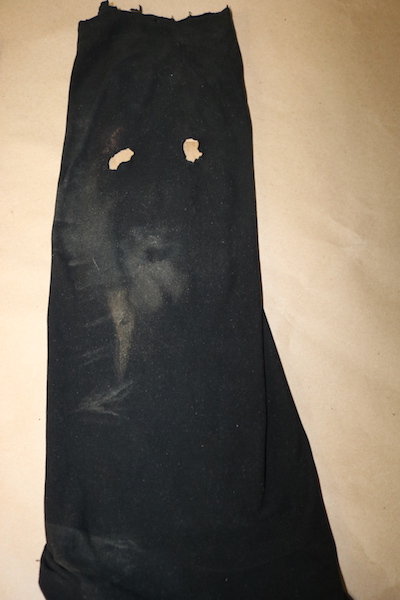 Officers located numerous burglary tools that Morelos was using. Morelos was arrested approximately 40 minutes after the initial call was received by a Santa Barbara Police Dispatcher. Detectives were called to assist in this case and learned Morelos may be connected to additional, similar burglaries in the City of Santa Barbara.

The other potential related burglaries are currently under investigation and no other information can be released at this time.

Police are on scene for a reported burglary that occurred in the 600 block of N Milpas. The subject then got on to the roof and is not complying with orders from police.

Subject is on the roof, police have eyes on him

Requesting fire to bring a ladder

Verbal contact made with the subject through the ceiling in Domino's

Report of another subject possibly on the roof

Scanner - If cops used the two-way radio depicted in the photo & called for the other (possible) suspect in the area, I wonder if they would have answered:)

Nice bust- Thanks to the "community member" for being heads up and calling it in and getting involved!

Where did he think he was going to plug in the angle grinder?

Wear an orange vest and a hard hat, and drape some yellow caution tape next time you try the roof entry technique.

With waht he had on him, it doesn't look all that "allegedly". <G>

Sad that Channellocks are now considered a "Burglary Tool"... Those side cutters look pretty wimpy, & what's with the different L/R gloves is that some special technique? Really like the "Face mask", you can even see where his mouth was.

I wouldn't want them rousted