On Monday May 6, John Roger Battistone (who prefers to be called Roger) and Michael Mould held a charming book signing at Chaucer's Bookstore in Loreto Plaza where old friends and local residents stopped by to get a first look at the beautiful history book with illustrations author John Roger Battistone now on sale in the community book shop. 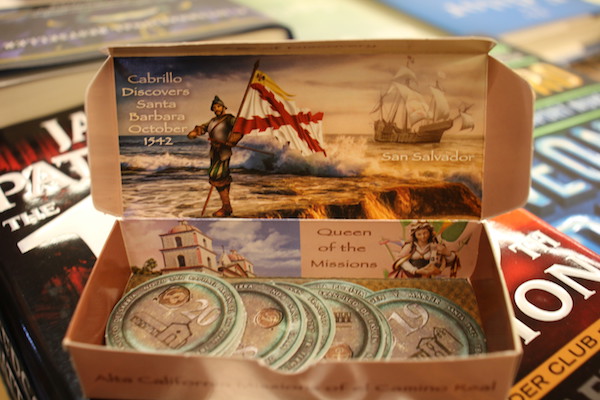 Pop out box with 21 Mission Medallions

The book is amazing in historical content, authentic illustrations, areas to inspire the artist in readers where they can insert their own coloring styles, and a fascinating pop out box containing coins celebrating the 21 missions along the Camino Real. This box is a brilliant idea to allow children a hands-on way to learn the history of the California Missions. This book is a true masterpiece for locals who love their Santa Barbara history, or for newbie’s to Santa Barbara who want to get a fix on this amazing city by the sea that is overflowing with secret locations, interesting people, places and things to learn about. As a local who loves stories about Santa Barbara and the people who founded it, I am blown away by this authentic and creative new look on our wonderful history! 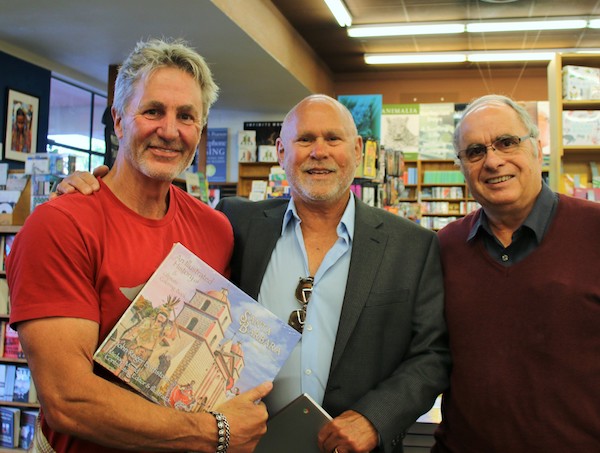 “Although I had input every step of the way over the past four and a half years and collected so much of he historical material, it was Michael's talented editing and book design and drawing talents that brought the book to the quality and real tribute to Santa Barbara's history makers that we wanted to honor.” “I was privileged to be raised in Santa Barbra, and appreciate the research Michael has done on its history. The book may not be a profit-making proposition, but we are both extremely proud of our accomplishment and are grateful to share this history book with others,” said Roger Battistone.

Among the friends and guests who celebrated with John Roger Battistone, his proud daughters Chanelle and Arianna who assisted with book sales, was renowned photographer Michael Eliason and wife Kathy Eliason, friend and history buff Adam McKaig, locals Gene & Jean Marasco, Michael Mould contributing editor and Illustrator and his wife Vivian and invited guests. The cover of the book includes a lovely illustration of the Mission with an image of Father Virgil as well as Michael Mould's wife Vivian when she was a young woman celebrating Fiesta at the Mission in a Spanish costume. 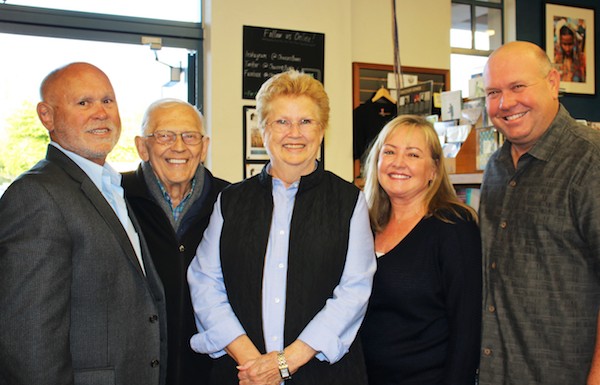 Chaucer's has a good amount of the book in stock so stop by and see for yourself what a beautiful and interesting tribute it is to Santa Barbara. It's a book that the whole family can enjoy and learn from.

Toggle Comments (Show)
Roger Battistone & Michael Mould Book Signing at Chaucer
History, regardless of its place or origin will have moments filled with honor, ignominy and yes, controversy. The IHSB book referenced in this article, after much thought and research presented a singular view from the many who witnessed or previously wrote about the events and individuals chosen for this volume of work . It is by no means an entire accounting, but rather a peeling of layers, obscured by many accounts of the same event or person. The stories shared in this book aren't meant to convey an opinion of either good or evil. As stated in the preface - "..Be enlightened. The narratives and illustrations included here are only 'stepping stones' to a broader bridge of knowledge". And the book's 'Epilogue' includes these thoughts - "..History affirms, good men with the best of intentions, commit errors in judgment & course - but who are we to pass pronouncements on events, we did not witness or on individuals, we did not know? If faced with the same challenges, could any of us have done any better? It is for this reason, alone - it is vital that history be inscribed, for she is; without prejudice, a worthy governess".
Roger Battistone & Michael Mould Book Signing at Chaucer
The early history of California isn't without darkness. It would be remiss to gloss over the parts that offend our modern eye., but this book can't deal with it at length and be a comprehensive history. That would be a good subject for an entire book of its own and should include the Church's view of "heathens to be saved" and other peculiar notions of the time.
Roger Battistone & Michael Mould Book Signing at Chaucer
Being mid-way through a read of Walker Tompkins' "Royal Rancho," and having just gone over and over Fr. Maynard Geiger's account of the Missions, I am curious to see what this book includes in the way of Chumash history.
Roger Battistone & Michael Mould Book Signing at Chaucer
Does it cover the many years of slavery & rape at the Missions, or just how wonderful life is in SB?
Roger Battistone & Michael Mould Book Signing at Chaucer
wow really? They are a really nice group of people! The world was a dangerous place -kill or be killed plus their ethics and sensitivities can not be compared by today's standards . I'm so tired of those who feel a need to look at the past without credit to any human rights advancements- News flash we didn't start slavery - but we did end it in our country.
Please Login or Register to comment on this.

Bravo! For being smart.

Great video, a must watch!

What a beautiful Kitty....

A few moments later I heard

Suspect is an Asian male 24

Liberal Arts saw a pot of

That would explain his lack