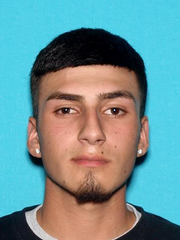 On March 1st 2018 the Santa Maria Police Department provided the public with a new phone number for a tip-line that leads directly to the Detective Bureau and the Special Enforcement Team (SET).

On March 2nd we received information via the tip line related to Cruz Antonio Guillen, a robbery suspect who had an outstanding warrant for his arrest. The robbery investigation originally occurred in late January, 2018, where Guillen and an accomplice robbed the victim at gunpoint at a residence in the northwest side of Santa Maria.

Members of the Santa Maria Police Department Special Enforcement Team initiated an investigation in efforts to locate Guillen. On March 2nd, during the evening hours SET located and arrested Guillen without incident in Santa Maria. He was booked into Santa Barbara County Jail on one count of 211 PC (Robbery).

The Santa Maria Police Department would like to thank the public for their assistance and we encourage anyone with information on serious crimes (such as violent crimes, narcotics-related offenses, and wanted persons) to call the tip line at (805) 928-3781, extension 2677 (COPS).