Results Released from 2018 Program to Protect Whales in the Channel

The partners in an initiative to cut air pollution and protect endangered whales announced results from the 2018 program and recognized the 12 shipping companies that participated, reducing speeds to 10 knots or less in the San Francisco Bay Area and the Santa Barbara Channel region. The voluntary incentive program ran July 1 - November 15, 2018. Partners recognized the companies at a ceremony at the Bannings Landing Community Center near the Port of Los Angeles and Port of Long Beach.

Shipping companies received financial awards based on the percent of distance traveled by their vessels through the Vessel Speed Reduction (VSR) zones at 10 knots or less and with an average speed of 12 knots or less. The 10-knot target follows the NOAA Office of National Marine Sanctuaries’ requests for vessels (300 gross tons or larger) to slow down during the months of peak whale abundance to protect whales from lethal ship strikes. This time of year also coincides with the typical high ground-level ozone (smog) season. The 10-knot target allows ships to travel at an efficient operating load that reduces air pollution and fuel costs.

The program is a collaborative effort by the following agencies and organizations: 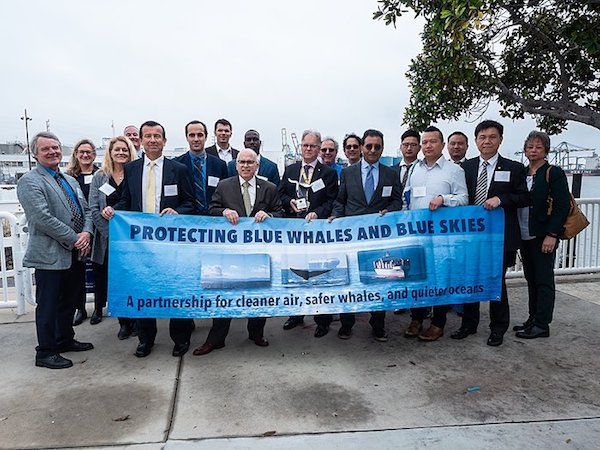 Compliance with the program was verified through Automatic Identification System (AIS) data from transponders on each ship that continuously transmit a ship’s speed, heading, and location. Of the nearly 130,000 nautical miles of ocean transited by all the ships in the program, 46,026 nautical miles were at 10 knots or less.

Shipping companies received financial awards at different tiers based on the percent of distance that the vessels in their fleet travelled at a speed of 10 knots or less. The four award tiers were Bronze (i.e., 10%-25% of their distance traveled at 10 knots or less), Silver (25-50%), Gold (50-75%), and Sapphire (75-100%). Below is the recognition earned by each participating shipping company:

Ocean-going vessels transiting the California coast generate emissions in the form of nitrogen oxides (NOx, a precursor to smog), sulfur oxides (SOx), particle pollution, and greenhouse gases. These vessels account for more than 200 tons of NOx per day emitted off the coast of California. Many of the areas affected by these emissions do not meet the state and/or federal air quality standards for ozone. Ship strikes are also a major threat to endangered blue, humpback, and fin whales. Slower ships create less air pollution and ocean noise, and are less likely to fatally strike whales.

“The National Marine Sanctuaries Act specifically guides us to: 'create models of, and incentives for, ways to conserve and manage these areas, including the application of innovative management techniques," said Chris Mobley, Superintendent of the Channel Islands National Marine Sanctuary. “Developing this incentive-based vessel speed reduction program in collaboration with county air management districts, the shipping industry, other agencies, and NGOs in order to reduce ship strike risk and improve air quality is a wonderful example of what marine sanctuaries can do to enhance ocean and human health while promoting a sustainable, blue economy."

The VSR incentive program has expanded in scope each year, including 2018, which marked the fourth year. Highlights of the 2018 program include:

Mike Villegas, Air Pollution Control Officer of the Ventura County Air Pollution Control District said, “We are grateful for the Supplemental Environmental Project award from the California Air Resources Board that provided funds to expand the scope of the VSR program and provide stable funding for two years. Reducing nitrogen oxides emissions from shipping in the Channel is crucial for Ventura County to meet the 2008 federal air quality standard for ozone by our statutory deadline of 2021. The continued implementation of the voluntary vessel speed reduction incentive program is a high priority for our agency.”

“Through cooperation and modest incentives, we can achieve the dual goals of protecting both the whales and our air quality,” said Jack Broadbent, executive officer of the Bay Area Air District. “This multi-agency effort highlights the positive changes we can make when we come together to reach mutually beneficial solutions.”

“It is inspiring to see how this program continues to grow each year,” said Aeron Arlin Genet, Director of Santa Barbara County Air Pollution Control District. “We applaud the shipping companies for taking this voluntary step to help protect whales and reduce air pollution off of our coast.”

Funding is in place for a similar program in 2019.

Thank you for the beautiful

Some of those Washingtonia

Thanks for the write-up!!

Thankfully they've all been

My son was sitting in his car

And it is good PR.

Unless they are needed