Mosto Crudo isn’t just a restaurant, it’s an experience. With paintings by local artists on the wall, live music from resident musicians, and a menu filled with a mixture of fresh and imported ingredients, get ready to be transported to another world in our own backyard.

This charming spot opened up just six months ago on Haley Street, the former home of The Champagne Room, by Chef Tiziano Fioretti and Alejandra Garcia. The couple worked in a rustic Italian restaurant in Westlake Village when they decided to embark on something a bit more creative. Garcia has roots in Spain and said they loved playing around with unique tapas that have Italian influences from Fioretti’s birthplace. They made a list of places in California to start a new adventure, and Santa Barbara won, although it wasn’t much of a competition. 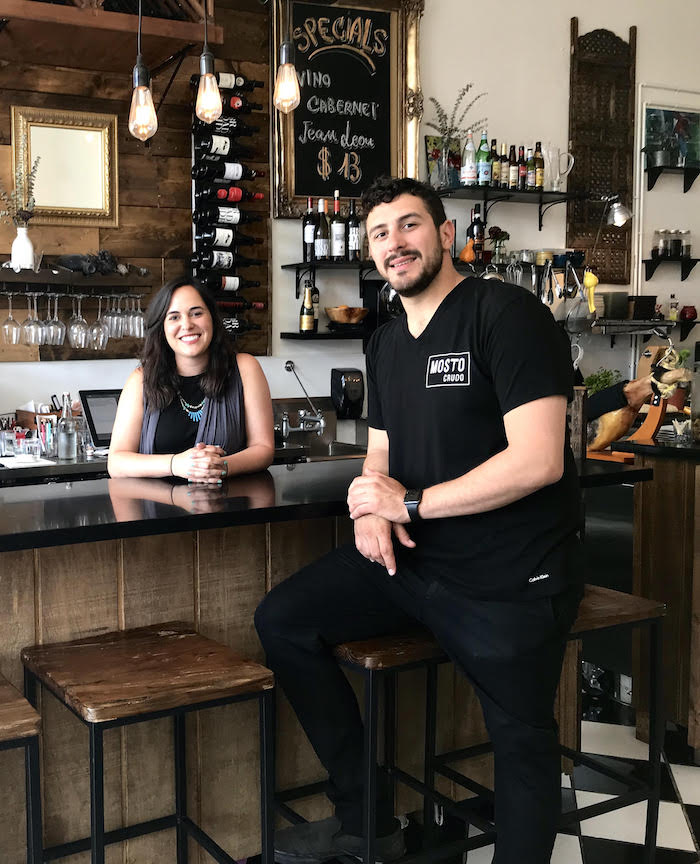 With a large bar and open-concept kitchen, Mosto Crudo diners are able to see Chef Fioretti in his element. The menu offers a wide offering from fresh seafood to rich cheeses and creative crostinis. Their name sums it up quite well, Mosto meaning the juice of freshly pressed grapes before or during wine fermentation, and Crudo meaning raw.

But before diving into the food, you must start with wine. It’s the Italian/Spanish way. We started with a glass of La Tunella Refosco dal Peduncolo Rosso. It was a lighter, fruit forward wine from Northern Italy. It was very smooth and easy to drink. I typically call these the “uh-oh glass” because it drinks a little too easily and might be hard to remember how much wine was consumed.

Before the larger tapas arrived, we were served with Spanish and Italian olives, that have been marinating for at least three months, and jalapeno spiced almonds. We then opted for the Chef’s Selection of items where the Chef decides what’s best that day. We first tasted the raw ahi tuna with fennel seeds and blood oranges. I’m not usually a fan of fennel seeds but it really grew on me, giving an added refreshing element to the fish. 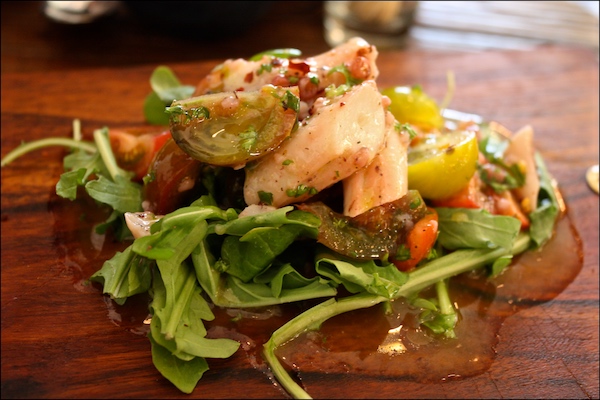 Next were raw scallops with spinach and blood orange. WOW. They melted like butter and were seasoned perfectly. These were quite possibly the best scallops I have ever tasted and I challenge anyone to prove me wrong.

Then we were served octopus nestled on a bed of heirloom tomatoes, arugula, lemon, and herbs. It was precooked and served chilled. As my first taste of octopus, I was a bit skeptical given the tiny tentacles, but I have to admit, it was pretty tasty. The texture was meatier than I expected, but the flavor was delicious.

Crostinis were up next and possibly the most inventive items on the menu. Think along the style of bruschetta with much more creativity and flair. We tasted the burrata crostini, the mushroom and speck crostini, the duck rillettes and arugula crostini, anchovies and red pepper crostini, as well as yellowtail and steak tartar on top of crostinis. The burrata crostini was my personal favorite with the yellowtail coming in for a close second, but each one had such complex and unique flavors that left it was a hot debate over which ones were our favorites.

My second glass of wine was the Petra Hebo Toscana 2015, a delicious “Super Tuscan” blend of Cabernet Sauvignon, Merlot, and Sangiovese. This glass was bolder and drier than the previous one, but just as tasty to finish up the meal with a large charcuterie platter. Chef Fioretti chose a selection of mixed cheeses, imported cured meats, honey, and nuts to wind down the meal.

Alejandra kept an excellent front of house, tending to patrons with detailed descriptions of each dish with wine pairing suggestions. I went with her recommendation on both wines and was not disappointed, but having superb service makes the dining experience that much more pleasant. Her overall welcoming nature made me feel like I was a guest in her own kitchen.

The final taste was an Avocado Truffle Mousse with coconut and raspberries that are completely vegan, no cream or butter. I’m usually skeptical of vegan cuisine, but this was exceptional. Just like everything else on the menu, it was flavorful and fresh, nothing felt heavy or dense. 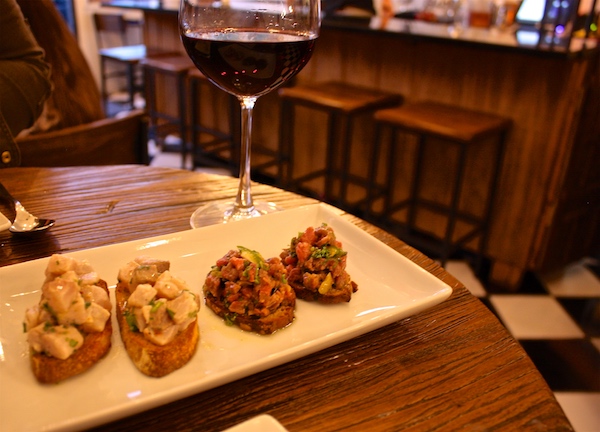 After the meal, Chef Fioretti chatted with us about food beginnings growing up in Rome and how Santa Barbara has its own distinct European vibe. His excitement really showed while watching him carefully create every dish. The attention to detail and pure craftsmanship is equally matched by his passion for food. He discussed his love of appetizers and tapas, expressing that people should try more than one dish at a restaurant. “It promotes conversation and sharing, food should be an experience,” said Fioretti. 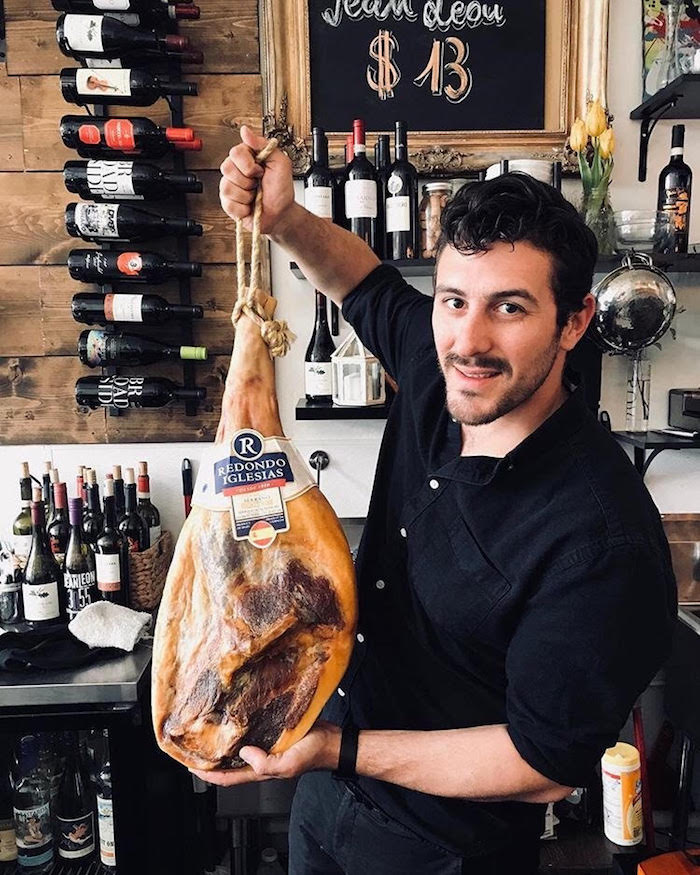 Embark on your next food experience at Mosto Crudo on 7 W. Haley Street, open Tuesday – Sunday.

That’s great, so the name is raw grapes, can you tell me if all the food is raw? I read everything you were served and it all sounded raw.
Thank you

It's raw grape juice and the imported cured meats are not raw.

Looking at their menu, most things appear to be raw. Except the bread under the crostini could be baked/toasted. But all the meats are raw. Looks delicious, thanks for sharing!

Second, the apostrophe does not mean, “Holy shit, here comes an 'S'!”

The gift of Das Williams

7:49 would you clarify what

Yeah, and there should also

I thought I heard it was a

Some of my faint earliest