The new FEMA recovery map for Montecito is designed to help property owners rebuild after the devastating debris flow of Jan. 9. It roughly doubles the size of the flood plain for Montecito, given a 100-year storm. But some residents whose homes survived the disaster wonder why their homes appear in the high hazard area on the map (Photo: Mike Eliason, Santa Barbara County Fire Department)

As most of the South Coast braces for the next fire, Montecito is focused on the next flood.

An advisory flood map released in June by the Federal Emergency Management Agency easily doubles the area of Montecito that is likely to flood during a 100-year storm; the new flood plain, or “high hazard area,” now covers roughly half the community, and it predicts higher flood water elevations than in the past.

The new recovery map, as it is called, is designed to help property owners rebuild more safely in the wake of the Jan. 9 debris flow: about 300 damaged or destroyed structures await repair or reconstruction. But many residents who were unaffected by the disaster believe the map must be wrong.

Robert Rothenberg of 2900 Torito Road is one of them. He can’t figure out why his house, untouched by the debris flow, is depicted within the flood plain.

“They arbitrarily did that to us,” Rothenberg said. “Our property value may go down. It may be harder to sell our property. But none of the 32 homes in our association, except one next to Toro Creek, was affected by the debris flow.”

Still, Rothenberg said, he took out flood insurance because he “didn’t know what was going to happen in the future.”

FEMA officials say they will adjust the map to correct technical errors, but they don’t expect to make significant changes. The map depicts the likely scenario for a debris-laden flood in the wake of the Thomas Fire of December during extreme rainfall events – 15 inches in 24 hours in the mountains, or eight inches on the coast. It is not a debris flow map.

“We feel confident in the mapping that’s been produced,” Eric Simmons, a senior engineer at FEMA’s Oakland headquarters, told an audience at the Montecito Union School on July 11. “It models the burned watershed, which has the ability to produce peak discharges and flow rates much higher than a non-burned watershed.

“Flood maps change all the time. People don’t want to see the change, but it’s important to be able to communicate the risk.”

On July 18, the Montecito Planning Commission and Montecito Board of Architectural Review will hold a joint workshop to field residents’ questions and concerns about the recovery map. The meeting will begin at 9 a.m. in the County Administration Building.

The FEMA recovery map is interim in nature; a final Flood Insurance Rate Map will be completed by the agency in three to five years. In the meantime, officials say, flood insurance rates in Montecito will be based on the old maps, but the recovery map will be used to determine the safe elevation of new buildings. Under county ordinances, the first floor of new homes must be built at least two feet above base flood water elevations. (There are no building standards for debris flows.)

“Because the maps were approved so quickly, we didn’t really have an opportunity to hear the community voice its concerns,” said Tom Bollay, a Montecito architect who was appointed last week by the Montecito Association, a homeowner group, to serve as a map liaison between residents and county Flood Control.

“Here we are in a high danger zone where we didn’t literally have any mud on our street” in the debris flow, Walton-Masters said.

Randall Road on San Ysidro Creek is sometimes mentioned by FEMA’s critics as a “mind-boggling” error on the new map: six of seven homes were destroyed and two people died there, yet the map predicts flood water elevations of less than six inches of water on those properties during a 100-year storm.

County officials have noted that the topography on Randall is now higher in elevation because the debris flow on San Ysidro Creek left behind a massive deposit of mud and rocks there on Jan. 9, and because the creek itself was scoured deeper during the debris flow. 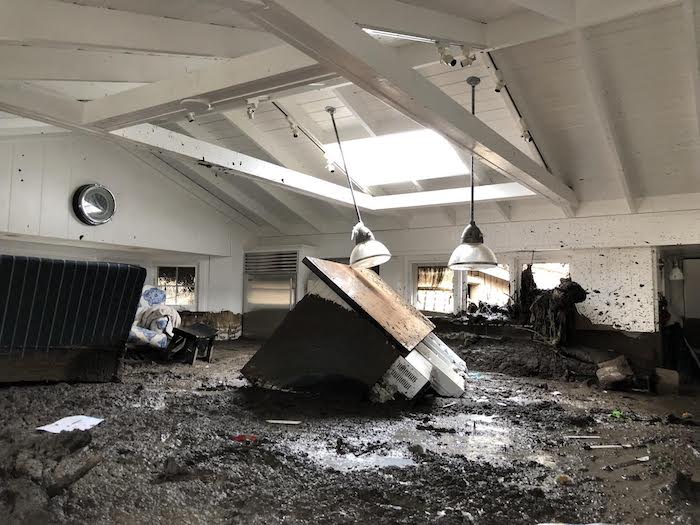 The FEMA recovery map is now the county’s best flood map, said Tom Fayram, director of county Flood Control. For one thing, he said, FEMA based its calculations on aerial LIDAR data, or remote sensing imagery, a 21st-century technology that recorded the elevations of Montecito’s changed topography, post-Jan. 9. Also, Fayram said, the agency assumed that floodwaters would be full of mud and debris in the aftermath of the Thomas Fire, so the recovery map more accurately reflects what’s likely to happen in big storms.

“There are places where San Ysidro Creek breaks out and wants to go to Oak Creek, and Hot Springs Creek wants to go to Cold Springs,” Fayram said. “This map comes the closest I’ve ever seen, because it allows the water to spread out.

“Yes, we’re depicting something that’s much worse than the existing map. It’s a destabilizing thought. But I think we got it as right as we could. Remember, 23 people died here. That is something that we should be cognizant of.”

County officials say the old flood map for Montecito was grossly inaccurate in some places; in the neighborhood of Montecito Oaks, for example, it depicted base flood water elevations below the level of the ground.

On Wednesday, representatives of the Montecito Association will ask the commission and architectural board to look into a potential recovery map glitch for property owners who wish to rebuild after the Jan. 9 disaster. What if they want to elevate or move their new homes, yet their properties do not appear in high hazard areas on the new map? Would they still qualify to rebuild under the county’s new “like-for-like” ordinance, which waives zoning permits and design review?

“We want to be able to provide this input, ask questions and give direction to staff,” said Cori Hayman, an association board member. Hayman said that in recent weeks, she has received two dozen calls about the recovery map from worried residents.

“They feel strongly it is inaccurate,” she said.

Finally, at the FEMA meeting at Montecito Union last week, Karen Feeney, an employee of Allen Construction, said it was “a little crazy-making” for residents trying to rebuild because in just five years, the recovery map will be replaced by another FEMA map, the final Flood Insurance Rate Map.

So, in five years, will the flood plain in Montecito likely be smaller on that map, based on vegetation regrowth in the Thomas Burn area and less runoff in big storms? Feeney asked.

Yes, but not much smaller, Simmons said.

“The FIRM map would reflect existing conditions,” he said. “The hazard in most areas would not be as extreme as what the recovery map shows.”

Nevertheless, FEMA officials urged Montecitans to take out flood insurance starting now, even if they are in a low-hazard area. The wet season, they noted, is coming soon.

“The next event won’t read our map,” Simmons said.

Toggle Comments (Show)
Residents Object, but FEMA Recovery Map Will Stand
The 1969 flood was 5 years after the Coyote fire but did a great deal of damage. If there had been attention paid to past history it would have been known that some homes in Glen Oaks were badly damaged so current residents should have evacuated in January. On Hidden Valley Lane off Ladera Lane, (outside Montecito boundaries), had a very small water channel that barely made a dip in the road. In 1969 it became about 10ft deep and 20ft across.
Residents Object, but FEMA Recovery Map Will Stand
Wake up folks this happened in the 1960s, 95, 2018 and it will happen again in less then 100 years.
Residents Object, but FEMA Recovery Map Will Stand
exactly !
Residents Object, but FEMA Recovery Map Will Stand
100 year storm ? What about 1964 & 1995! The topography lends itself to a downward flow- whether it be water, mud, trees or boulders. The limited amount of creek maintenance and flood control has been of little concern until now- however with the amount of damage & loss of life it warrants an intense response from all the agency's and FEMA, there is no way to predict which direction any one boulder will tumble causing debris flow towards one house and not another. No one can predict disasters and how perfectly to protect from them. However one could look back just 50 years and see that water from our foothills has closed 101 FWY before and boulders have gone through homes in the area.
Residents Object, but FEMA Recovery Map Will Stand
From an insurance point of view if your home is determined to be in a flood zone, which many of these homes will, the best thing you can do is to get an elevation inspection done by an inspector from the city. It costs about $300 usually and is that will help reduce your cost for flood insurance significantly if your house is elevated enough above the flood zone, which many of them actually are. It also should help prevent to prevent as big of a reduction in the value of your home. The goal is safety, it's frustrating yes but that's the goal. There are always things that people can do to help mitigate things like this! Look for Solutions...
Residents Object, but FEMA Recovery Map Will Stand
The elevation certificate will only help if the inspection shows that your property is actually elevated above the predicted water level on the map, but since they used hi-res LiDAR data for this analysis there is not much chance of that. If you think the floodplain analysis was done incorrectly you can hire an engineer to redo it correctly and submit the results to FEMA to get a map revision done for you. Or perhaps FEMA or their contractor will do it for you if you submit your technical comments to them before the map is finalized. Really the fact that they are talking about a 24-hr storm is an indication of a disconnect because in these relatively small watersheds the 6-hr storm would result in higher flows. The analysis assuming bulking and blocked bridges resulted in the maximum probable water elevations but alluvial fans are very tricky to evaluate.
Please Login or Register to comment on this.

I don't believe it either a

Still waitin' for the Zika,

Panhandling in this town has

There's a place called a

You're homeless but you can

POLL: Who goes to a family

Tell me why this vagrancy