FEMA is drawing up an interim recovery map of local watersheds to help guide development over the next few years in Montecito and Carpinteria. This is a view of Montecito the day after the deadly Jan. 9 debris flow. (Photo: Matt Udkow / SBCFD)

Last week, the owners of a one-story home on Santa Elena Lane sought preliminary approval from the Montecito Board of Architectural Review for an 800-square-foot addition and a new wall in the front yard to deflect floodwaters from Montecito Creek.

The Jan. 9 debris flow carried mud right up to the house but not inside it. The property was green-tagged; county inspectors did not find any structural damage. But on Thursday, planners put the proposed addition on hold until FEMA, the Federal Emergency Management Agency, draws up a “recovery map” for Montecito.

Thiep Cung, the board vice-chair, objected to the delay and said he was tired of looking at piles of mud all over the place.

“It’s refreshing to see a project come in and not waste any time getting back to the new normal,” he said. “I don’t want this process to drag out for three months.”

If Cung is frustrated, so are the owners of 350 homes that were destroyed or badly damaged on Jan. 9. They have been advised by the county not to spend money on their rebuilding plans until FEMA finishes its work.

“We’re asking people to hold off,” said Petra Leyva, a county supervising planner – but if they want to move forward right away, she added, they can request a meeting with county officials. 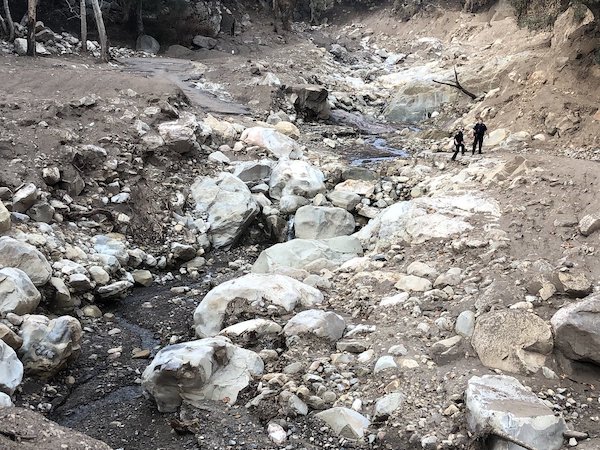 During the Jan. 9 debris flow, a number of creeks in Montecito filled up, jumped their banks and forged new paths. This is a view of Cold Springs Creek and the destroyed crossing at Mountain Drive, one week after the disaster. (Photo: Mike Eliason / SBCFD)

During the Jan. 9 deluge, with terrible ferocity, the debris flow widened the creeks in Montecito, filled them up in places, jumped their banks, obliterated whole neighborhoods and dramatically altered the topography of huge swaths of the community. In some locations, deposits of mud and rocks have raised the contours of the land by 20 feet. The debris flow footprint is much wider than the floodplains delineated on county maps.

“Those who survived this disaster are at high risk for another event,” said Eric Simmons, a senior FEMA engineer who is leading the remapping effort with a team of hydrologists, engineers and digital mappers at the agency’s regional offices in Oakland. “That’s why we’re working together and encouraging new development to be safe.”

The team will look at watersheds affected by the Thomas Fire from Montecito Creek to the Ventura County line, including in the Carpinteria Valley, Simmons said. The work began two weeks ago and will take three or four months, he said. The study is based on LIDAR data – remote sensing imagery that was collected by air shortly after Jan. 9, using light from a laser to survey the ground.

The recovery map is designed to help guide new development in the aftermath of the Jan. 9 debris flow, Simmons said. It will delineate the boundaries of “hazard zones” in Montecito and Carpinteria, he said, based on the amount of floodwater that is expected to come down local streams and valleys during a 100-year rainfall. The new zones will take into account floodwater that may be laden with mud in the aftermath of the Thomas Fire, Simmons said.

Within the hazard zones, he said, FEMA will show the elevations of floodwaters, marking how high the water is expected to rise during a 100-year rainfall. There is a one-percent chance of a 100-year rainfall occurring in any given year. For purposes of the study, FEMA has defined a 100-year rainfall as 15.3 inches of rain within 24  hours in  the mountains above Montecito and Carpinteria or 7.8 inches within 24 hours on the coast.

The new hazard zones will likely be larger than the floodplains designated on existing county maps, Simmons said. And, he said, they may include areas of potential flooding and debris flows that were unscathed on Jan. 9. LIDAR technology has revealed the existence of several long-abandoned prehistoric channels in Montecito – low-lying areas, now heavily residential, that could be “reoccupied” by future debris flows.

“We will model where the hazard goes,” Simmons said. “If it jumps out of the bank and goes into lower-lying areas, that’s what the new map will show.”

The recovery map will be an interim map, Simmons said. It will take FEMA four or five years to draw up the more comprehensive Flood Insurance Rate Maps that the county uses for long-term floodplain management, he said.

FEMA has not decided whether to map the creek banks and channels in Montecito and Carpinteria as part of its recovery map, Simmons said. The county currently requires property owners to survey their own properties and locate the top of any nearby creek bank when they apply to rebuild.

County ordinances currently do not allow building within 50 feet of the top of a creek bank. They also require that the first floor of homes near creeks be at least two feet above the baseline floodwater elevation. Those setbacks and height minimums will not likely change, said Jon Frye, county Flood Control engineering manager.

At the same time, in order to promote safety and resiliency – the new watchwords for Montecito – county planners are revising the ordinance that regulates “like-for-like” rebuilding of the same house in the same footprint. They want to give owners more flexibility in case of debris flows, recognizing that the creek beds in Montecito have changed and so has the topography of the land. “Like-for-like” rebuilding is generally exempt from planning permits and architectural review. The new ordinance is expected to go to the county Board of Supervisors for a vote in April.

“They will be pipes or brass disks in concrete,” he said. “We are setting them in convenient areas. They will be very accurately defined.”

At the same time, Jevremovic said, the county is seeking $750,000 in FEMA funds to re-survey the location and width of the county right-of-way in Montecito, chiefly roads, ditches, and shoulders where public utilities are located. Many survey markers on the roads were destroyed by the debris flow or during cleanup operations, he said.

Also, over the next couple of

Inexcusable. But I’d bet that

One Injury in UTV Collision Off Paradise Road

That gate at upper oso is

One thing that these turds do

Jogging after 9pm, at night

They are open for essential