It has been over five years since the Refugio Oil Spill devastated the Gaviota Coast. A stark reminder of the catastrophic 1969 oil spill, Santa Barbara County was again under a State of Emergency. The economy, public health, and the environment were negatively impacted as 136 square miles of coastline were shut down. Fishers’ livelihoods were at risk, state parks and campgrounds were closed, people could not enjoy the beach for weeks, and countless wildlife were badly injured and killed. The impacts resulting from this disaster could have, and should have, been avoided.

Plains All American Pipeline, the owner of the ruptured pipeline (Line 901) that spilled 451,500 gallons of crude oil onto Refugio Beach and into the ocean,[1] did not operate the pipeline with an automatic valve shut off system. Such a system would have limited the size of the spill and prevented the oil from reaching the ocean.[2] County wide protests and historic outrage against the fossil fuel industry were refueled as response efforts were too slow in reducing the spread of the oil and mitigating the negative environmental impacts.[3] 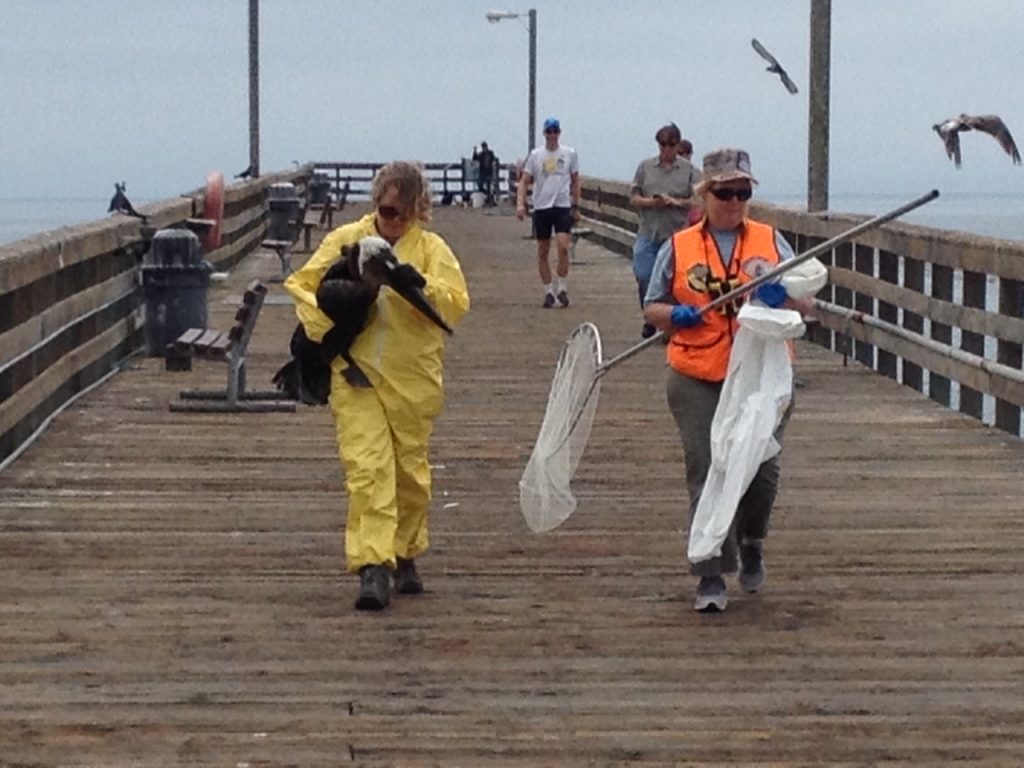 Many members of the community wanted to be involved in the cleanup process, but confusion about who to call or how to volunteer overburdened the response efforts. Many locals were shocked that official personnel were not working on the scene immediately to remove oil form the coastline. The U.S. Coast Guard, which was the Unified Command Initial Response Leader at the time, did not allow for its designated first responders to begin meaningful containment and cleanup efforts until the next morning. In part because of a lack of effective immediate response, ordinary citizens took it upon themselves to clean the oiled beaches and rescue wildlife, risking their own health. To fill the void that responsible agencies should have taken, local organizations stepped up as community liaisons and leaders.

The Environmental Defense Center (EDC) became a leader in improving volunteer opportunities and engagement with nonprofits and the community for future spill events. Various nonprofits and stakeholders, including the U.S. Coast Guard and other agencies, collaborated to create subcommittees to streamline the communication process, discuss best technology for response, and improve outreach and education. Scientists, researchers, fishers, local agencies, and community leaders were part of the subcommittee process and met for over a year to improve stakeholder engagement. Comprehensive volunteer management and community outreach plans were created to enhance future cleanup and response efforts. Another successful outcome was appointing the Santa Barbara County Fire Department (SBCFD) as a first responder and incident commander, so that during future spill events firefighters can arrive on scene and take immediate action, deploy necessary resources, and begin rapid response efforts. If this was the case during the Refugio Spill, the magnitude of damages would most likely have been reduced, since the SBCFD could have begun immediate response efforts due to the first responders’ commands. Instead, SBCFD and personnel onsite the day of the spill had to wait until the next day to begin cleanup efforts.

While improvements have been made for future response efforts, restoration of the Refugio Oil Spill is still in the planning stages more than five years later. As part of the official response efforts, a federally mandated Damage Assessment and Restoration Plan (DARP) is required to restore habitat, wildlife, and natural resources that were damaged form the Refugio Oil Spill. Federal and State Agencies, including the National Oceanic and Atmospheric Administration, U.S. Fish and Wildlife Service, CA Department of Fish and Wildlife, CA Department of Parks and Recreation, University of California, National Park Service, Bureau of Land Management, and CA State Lands Commission collaborated as the Trustees to complete the draft DARP.

Since an oil spill in the ocean can never be fully contained, the DARP aims to restore habitat and injuries to community resources from the Refugio Oil Spill through compensatory restoration. The goal of compensatory restoration is to make up for the interim loss of the injured resources through related restoration activities. The draft DARP describes and quantifies injuries to birds, mammals, marine habitats, and impacted human uses, and quantifies potential restoration project benefits. EDC, working to demand full restoration of injuries to the environment and public health harmed by the spill, reviewed the DARP and supported many of the proposed restoration projects, but a few suggestions and concerns remain.

Improvements Must Be Made

A major concern EDC identified in our comments is that the amount of oil spilled from Plains’ Line 901 may not be adequately quantified in the injuries and restoration project assessments. The U.S. Department of Transportation Failure Investigation Report determined that 123,000 gallons of oil was released, which is the official number being used to determine the scale and funding of the proposed restoration projects.[4] However, UCSB experts determined that approximately 3.5 times that amount, or 451,500 gallons of oil, ruptured from line 901.[5] EDC requested that the UCSB report be mentioned and considered in the DARP, so the true restoration requirements for the damages to natural resources are represented in the selected restoration projects, assuming the quantity of oil spilled was much higher than the estimate agencies used. If so, many of the projects could be scaled and allocated more money and resources to restore larger areas of habitat to successfully achieve full compensation. 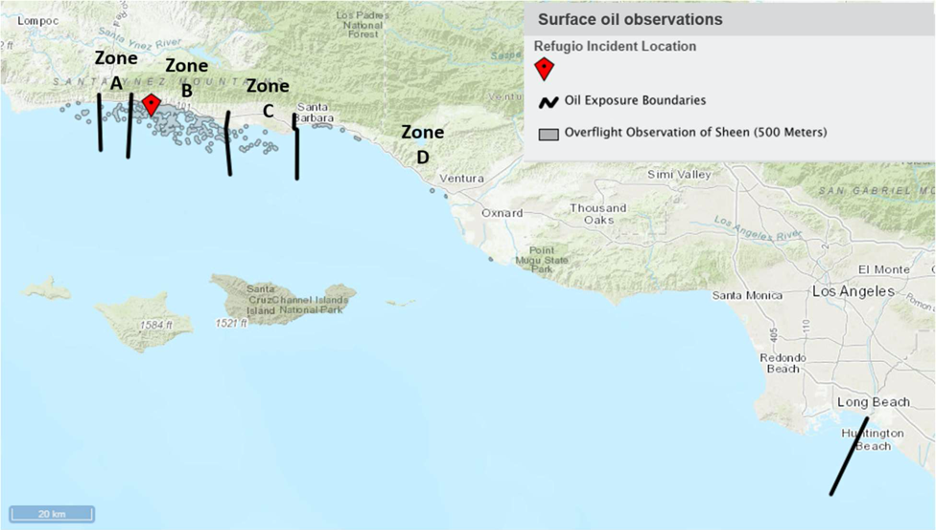 This map shows the coast guard observation of the cumulative spread of the surface oil in a 14 day period. (Photo Credit: RBOS Draft DARP)

While EDC has concerns about the assessment of damages, we were pleased to see many promising restoration projects included in the DARP. The Ellwood Seawall Removal project is one such project, not only because it benefits natural resources damaged by the spill, but it also removes remnants of the oil industry. The seawall was used during the Ellwood oil and gas operations in the early to mid 20th century. Removing the seawall will restore ecosystem processes benefitting sandy, subtidal, and fish habitats. The Sand Dune Restoration Project in Ventura is another great restoration project because it will enhance climate change resilience by strengthening adaptation to sea level rise, which is amplified by the activities of the fossil fuel industry. EDC also suggested that beach grooming activities could be prohibited in Ventura and Los Angeles Counties. Beach grooming involves removing debris and seaweeds by a tractor on the shore and importing sand from different beaches. Studies show that beach grooming activities lower the biodiversity of sandy and intertidal habitats. Stopping these detrimental practices can allocate more money, resources, and scale up the size of the chosen DARP restoration projects, allowing for limited resources to result in more impactful restoration projects. EDC also noted that a missed opportunity that could benefit from restoration funds is the Goleta Beach Park Reconfiguration and Restoration Project. This project would provide safe beach access, allow natural shoreline processes and coastal realignment, prevent coastal erosion down the coast, and increase grunion population, which would benefit a multitude of organisms.

Once the DARP is finalized, the CA Department of Parks and Recreation (CDPR), the State Trustees, and the National Fish and Wildlife Foundation (NFWF) will administer funds for projects that will benefit recreation activities.[6] CDPR will allocate funds for recreation projects at State Parks from Gaviota to El Capitan. The State Trustees and NFWF will manage a separate pool of funds through the California South Coast Shoreline Parks and Outdoor Recreation Grants Program. These agencies will solicit grant proposals from the public and other stakeholders. To stay updated on opportunities on the projects that will be chosen and where to apply for grants check out the NFWF website.

The Refugio Oil Spill is a reminder that environmental catastrophes are inevitable with the fossil fuel industry. There is no risk-free way to develop oil. Leaks, ruptures, and spills from pipelines occur all the time. There have been over 700 hazardous pipeline spills in California since 1986.[7] Prevention of new and expanded oil development is necessary to prevent accelerated rates of oil spills. Let this disaster inspire us to demand our elected officials and decision makers to take steps to transition us from fossil fuels to renewable energy solutions that would provide sustainable jobs, reliable energy, and revitalize coastal communities.

Informative and encouraging article. Glad to know that the County Fire will be first responders in future spills and fossil fuel catastrophes, and that mitigation measures will be improving our damaged coastline. We remember the mess on our beaches, and hope this doesn't happen again, but as the article states, "There is no risk-free way to develop oil. Leaks, ruptures, and spills from pipelines occur all the time. There have been over 700 hazardous pipeline spills in California since 1986.[" Let's hope that this starts to change as the industry declines locally and fossil fuel consumption is replaced by renewable energy.

It may be "part of the earth" but it wasn't designed to be burnt in massive quantities, massive enough to change and disrupt the cycles of weather and climate. What is happening now because of fossil fuel consumption by homo sapiens is neither natural nor necessary.

Oil is being burnt in massive quantities - compared to the earth's billion year cycle when it was getting burned off into the early atmosphere except where it was trapped and left behind? It is only being released as part of the planet's every evolving cycle of change and renewal.

Nice word salad, with no obvious connection to reality.

How stuff works: ..."Oil didn't just happen; it took quite a long time for oil to develop below the Earth's surface. The first step in the process happened somewhere between 10 million and 600 million years ago (give or take a few years). At this time, tiny plants and animals (plankton) lived and died in the vast, ancient seas. As these organisms died, they sank to the bottom of the sea, mixing with the sand and mud there....."

Homo Sapiens are natural, so what they consume now was possibly designed by God to naturally provide a necessary bridge to get us to your Utopian future.

i agree with the homosapiens are natural so whatever we do is occuring by an act of nature, and have had that thought myself. however, that God's utopian future stuff is rubbish. homosapiens just happens to be the only species that evolved the trait of making conscious decisions that are detrimental to our survival