In a rare occurrence, the Santa Barbara Zoo’s giant anteater Anara has given birth to twins – two female pups were born overnight and discovered by keepers on Monday, November 21. Twins are unusual in this species, and the likelihood for survival of both pups, if left with the mother, is extremely low.

“We monitored the newborn pups and allowed them both to stay with their mother for as long as possible,” says Dr. Julie Barnes, Director of Animal Care and Health. “We had several plans to implement depending on how they progressed. Although Anara did an amazing job in the first few days, we were starting to see a significant weight discrepancy between the pups. That indicated it was time to start hand-rearing the smaller pup in order to increase the chances of survival of both pups.” 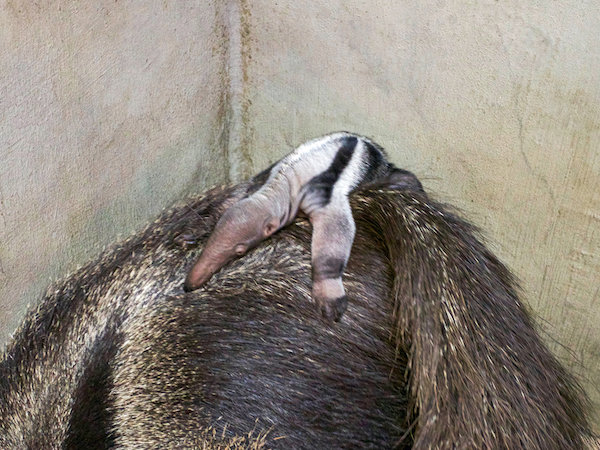 Giant anteater babies grow fast, and providing enough milk for more than one infant is difficult. In addition, the mother carries the baby on her back until they are nearly her size. So carrying both twins would prove impossible for the mother after just a few weeks. Anara herself is a twin and was hand-raised at the Fresno Zoo.

The larger pup is identified by two black stripes on her back, while the smaller has only one. The smaller pup is currently in an incubator in the Animal Hospital and being fed every three hours around the clock. She will not be on view to the public for several months. Anara and the larger pup are expected to go out on exhibit within the next two weeks – the pup will be clinging to her mother’s back.

“Anara is doing well and is a great mother,” adds Dr. Barnes. “We are delighted that both pups are female, as her previous two surviving pups were male. We need more females in order to ensure we have a genetically healthy population for his species in North America. Her mate Ridley, who came from Germany, has valuable genes that are not well represented so far. Those genes go with his offspring and help diversity the genes of giant anteaters in human care in zoos accredited by the Association of Zoos and Aquariums.”

Although twins for anteaters are rare, it is not so much the case for Anara as this is her second set of twins out of three pregnancies with Ridley. The pair’s first offspring were twins, a male and female, born in March 2014, but the female newborn did not survive. The male pup was hand-reared and is now at the Tennessee Zoo. Nine months later, another male pup was born and successfully raised by Anara. He now resides at the Birmingham Zoo.

The giant anteaters pups, like many of the animals at the Zoo, can be named by making a donation to the Santa Barbara Zoo. By naming the pups, sponsors also support the AZA giant anteater cooperative breeding program, and the goal of increased genetic diversity in North American zoos. For more information, contact the Zoo’s Development Department for details at 962-5339 or visit www.sbzoo.org.

A total of 29 giant anteaters have now been born at the Santa Barbara Zoo since 1975. Prior to Anara and Ridley’s first litter in 2014, the last time a giant anteater was born here was in 2006.

The Zoo was a leader in an early nationwide study of giant anteaters, thanks in great part to Grandma, who had over 15 offspring. The average lifespan for this species is between 20 and 23 years of age, and Grandma lived to be 31 years old. She was the oldest giant anteater in captivity when she died in 2002.

Giant anteaters were once found from northern Argentina to southern Belize, in savannas, grasslands, swampy areas, and humid forests. They have since disappeared from Belize, Guatemala, and probably Costa Rica. In South America, they are also gone from Uruguay and portions of Brazil.

The Union for the Conservation of Nature (IUCN) estimates population loss of at least 30% over the past 10 years, and lists the species as “vulnerable.”

Giant anteaters have a body length of 3 to 4 feet with a tail that is an additional 2 to 3 feet, and weigh 40 to 85 pounds, though some captive anteaters have weighed more than 100 pounds.

This species uses powerful claws to rip apart termite and ant mounds, and an 18 to 24 inch tongue to eat termites, ants, and grubs. In the wild, giant anteaters may consume as many as 35,000 ants in a single day. At the Zoo, they eat a specially formulated insectivore diet, plus avocados, bananas, crickets, and worms. The avocados must be ripe because anteaters do not have teeth; they break open the skin with their long sharp claws.

Anteaters in the wild are solitary, except for females with young, and spend most of their days with their noses to the ground searching for food using exceptional senses of smell and hearing – their sense of smell is 40 times more powerful than a human’s.

Giant anteaters typically spend their first months of life clinging to their mother’s backs, where their black and gray stripes line up with those of the mother.

Ha! I was thinking the same Flicka! They are cuter when full grown lol. Still a sweet story though.

Glad the Zoo is successful in breeding these animals. Most babies of any species are cute, this one defies the description.

Yeah just look at at what

Lots of hate in the deleted

The ambassador program is a

I would hire you for the nice

I believe this is/was in