Over 300 people registered to join in for the mouth-watering celebration of chocolate and wine at Santa Barbara Rape Crisis Center’s 10th Annual Chocolate de Vine fundraiser and the unveiling of the new agency name, logo, and colors on Saturday, April 28, 2018, at Santa Barbara Greek Orthodox Church. 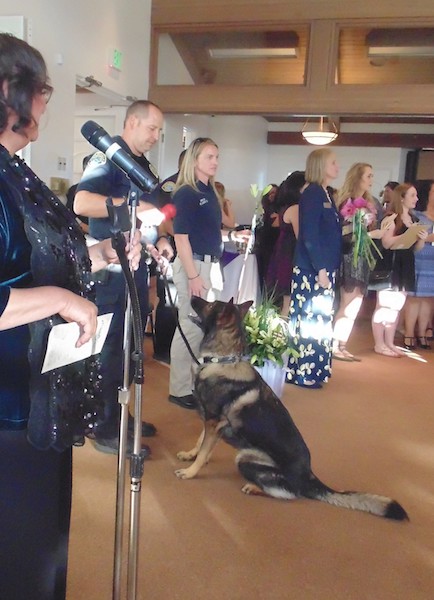 Senator Hannah-Beth Jackson, Elsa Granados, SBRCC Director, and Mayor Cathy Murillo all spoke of the important work the organization provides in the community and unveiled the new agency name, logo, and colors “Standing Together To End Sexual Assault” celebrated with a champagne toast.

City Council Member Gregg Hart and Mayor Cathy Murillo were MCs for the live auction, which included K-9 training and demonstration from SBPD Officer Payne & his dog Jake, as well as great trips, a valuable surprise box, Golf at Hyatt Regency Monterey, Taste of Mexico Tamales & Tequila, Evolutions Mother's Day package and a Salsa Dance Night that included a Salsa demonstration by Mayor Murillo, Gregg Hart and ME Sabor Dance Company members. Donations to the live auction were generous and a good time was had by all.

One of the highlights of the event was to present their new name and logo to represent the range of services they provide to the community. This is their big fundraiser of the year and without the generosity of the community and our local foundations they would have a hard time keeping their doors open.

Is the client base served by this worthy organization rising or declining?