An investigation was conducted by the Santa Barbara County Public Health Department (SBCPHD) to determine if the recent Thomas Fire and 1-9 Debris Flow events were associated with an increase in clinical cases of Valley Fever observed among County residents. Of the 56 patients whose data were reviewed as part of this investigation, none were firefighters but one was a first responder who worked on the Thomas Fire.

Most of Valley Fever patients lived in North (47 cases, 85%) or Central (5 cases, 9%) Santa Barbara County with only four cases (7%) living in South County. In addition, two of the four South County residents had traveled outside of South County to areas where cases of Valley Fever more commonly occur. Results from this analysis demonstrate that the increase in local Valley Fever cases appears similar to the increase in cases observed statewide since 2015. The reasons for these increases are not completely understood but are thought to be related to heavy rains after the California drought.

Valley Fever, also known as coccidioidomycosis or “cocci”, is caused by inhaling spores of a fungus known to exist in soil in the southwestern United States, particularly California and Arizona. People get infected by breathing in spores present in dust that gets into the air when it is windy or when soil is disturbed, like digging during construction. Most infected people do not show signs of illness. Those who do become ill with Valley Fever may have symptoms similar to other illnesses, including influenza or pneumonia, so Valley Fever is not always recognized. Rarely, people can develop more severe disease such as infection of the brain, joints, bone, skin, or other organs. 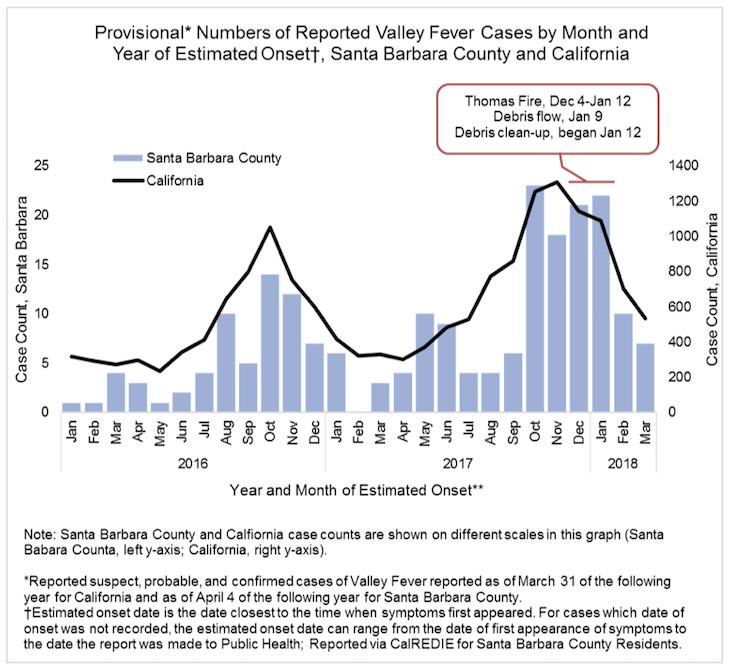 Following the October 2017 peak in Valley Fever cases in Santa Barbara County, the number of cases did increase again in December and January after the Thomas Fire occurred. The SBCPHD conducted a more in-depth analysis of the 56 possible Valley Fever cases reported between December 4, 2017 and March 31, 2018. Interviews were conducted with 43 of the 56 cases. Of the 56 patients whose data were reviewed as part of this investigation, none were firefighters but one was a first responder who worked on the Thomas Fire. Most of Valley Fever patients lived in North or Central regions of Santa Barbara County. In addition, two of the four South County residents had traveled outside of South County to areas where cases of Valley Fever more commonly occur. General data from this investigation will be shared on the SBCPHD website in the next week.

According to the California Department of Public Health, the reasons for California’s increased incidence of Valley Fever are not known, but climatic environmental factors favorable to the fungus Coccidioides proliferation and airborne release might have contributed. This includes rainfall after several years of drought and soil disturbance resulting from construction (https://www.cdc.gov/mmwr/volumes/66/wr/mm6631a4.htm).

The data from this investigation correlate closely with the epidemiology and seasonality of California’s statewide increases. SBCPHD will continue to monitor new cases that may be reported, as sometimes, reporting of disease may not occur for several weeks after the incubation period. Within Santa Barbara County, the highest risk for acquiring Valley Fever appears to be among those living in the North County region. The causes of increasing Valley Fever cases is a concern to local and state Public Health agencies and will continue to be investigated.

About 46 years ago we had a friend die of Valley Fever.

Is there a test for it? Is there some sort of cure?
Glad it appears to be unrelated to the dust settling on my windowsills daily when the winds were high during and after the fire/flood/beach dumping events.

Oh. Yes. Got my bill today