Between January 1st – 5th, 2022, Santa Barbara Police received several reports from a local church and children’s center regarding a string of burglaries that occurred in the area of 2100 State Street. SBPD Detectives started investigating the case and the public’s assistance was requested in identifying the two suspects involved in the burglaries. Six burglaries were reported over a five-day period.

Shortly after the request to the community, Detectives received several tips about the identity of the suspects. This information led to the arrest of the two suspects involved; Carla Rocha, a 23-year-old Santa Barbara resident, and Alex Francisco, a 19-year-old Ventura resident.

Rocha was located and arrested in the 100 West block of Cabrillo Blvd. on January 17, 2022. The next day, on January 18, 2022, Francisco turned himself in at the Santa Barbara Police Department.

During a separate incident, on December 28, 2021, Officers investigated a robbery that occurred at a local smoke shop in the 1900 block of De La Vina Street. Three suspects and a get-away driver committed a robbery at gunpoint, taking the cash register.

On January 20, 2022, Detectives arrested suspect Vicente Herrera-Chavez, a 42-year-old Santa Barbara resident during a traffic stop off Hwy 101 and Patterson Ave (Goleta). Located in Herrera-Chavez’s vehicle was a loaded handgun as well as narcotics.

That same day, Detectives located suspect, Jose Arnulfo Munoz, a 25-year-old Santa Barbara resident in the 1600 block of Bath Street. Munoz was placed under arrest for his suspected involvement in the robbery. He had narcotics and paraphernalia on him at the time of his arrest.

Later in the day Detectives located the third suspect in the 1st block of Santa Felicia Dr., City of Goleta. Marcos Jorge Pecero-Martinez, a 37-year-old Goleta resident, was also placed under arrest for the warrant related to the robbery.

Detectives executed search warrants at a residence in the 300 block of West Valerio Street and located and seized evidence related to the robbery.

All arrestees were transported and booked in the Santa Barbara County Jail. The following charges for each individual are listed below:

The Santa Barbara Police Department would like to thank the public as well as the media for their assistance in apprehending these suspects. 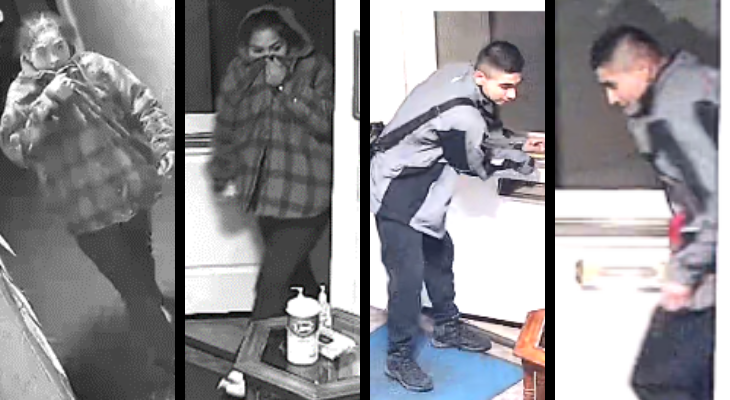 These are very serious charges. If proven these criminals should be in prison for a very long time. Yes, DA's office, we're looking at you.

Glad to see this bunch rounded up. Great Policing

Wow, fantastic work, SBPD. There have been quite a few reports on NextDoor , with Ring and other cam pictures of packages being lifted, with people saying it is hopeless, no one will do anything. Glad you are proving them wrong: our PD is on the ball! Now, hopefully, the DA's office will prosecute and your work won't be in vain.

Notice the common denominator?
No, not race.
Meth and its cousins,unregistered guns and petty crime.