Scroll through the above photos

Like many Santa Barbarans, despite the vast beauty around us, we sometimes venture out looking for greener pastures - especially when the "June Gloom" is upon us. So, with this year's near-record Sierra Nevada snow pack being rapidly melted by above-average temperatures, we decided to visit Yosemite for a look-see.

Water in the park this year is everywhere to be seen, mostly at levels and flows not always reached in general and a most welcome sight after years of drought in particular.

Most visitors from Santa Barbara enter Yosemite via Route 41 from Oakhurst.  We begin our photo essay (above) with the "standard" view of Yosemite Valley known as "Tunnel View" - so named because it comes into view as you exit the mile-long Wawona Tunnel. Here seen in daylight and showing off the lovely Bridal Veil Fall to the right. (First-time visitors have been known to veer off the road as this stunning WOW-factor picture postcard scene comes into view.) Yosemite icons El Capitan and Half Dome are to the left and middle respectively. And, for those clamoring for vicarious adventure, don't forget to see the award-winning National Geographic documentary, "Free Solo," featuring pre-eminent rock climber Alex Honnold scaling the face of El Capitan in record time (just under 4 hours) and without safety gear of any kind. Talk about Spider Man!

Next, (below) we gain a close-up view of Bridalveil Fall comprising a vertical drop of 617 feet and so named because swirling mist at the base often resembles a bride's veil.  However, the Ahwahneechee Native Americans of Yosemite and environs called this waterfall "Pohono", which means "Spirit of the Puffing Wind". 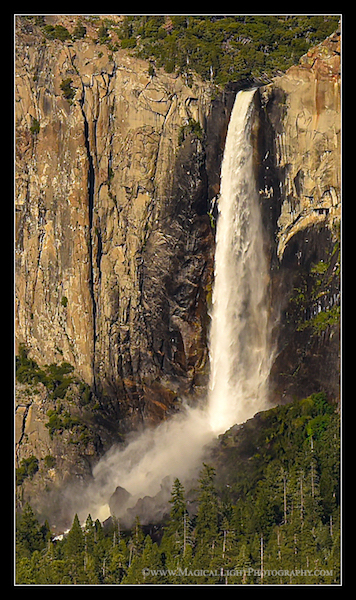 Moving on to Yosemite Falls (second slideshow photo).  With a vertical drop of 2,425 feet in three sections it is the tallest waterfall in North America and the sixth tallest in the world. In the two photos seen here of the waterfall, the first was taken to the right side of Swinging Bridge and depicts how the Merced River has overflowed its banks and partially flooded Sentinel Meadow.

The below photo shows closer detail of Lower Yosemite Fall and gives a sense, with its swirling mist rising on updrafts created by the heavy flow, of the mighty power of Mother Nature in this setting. 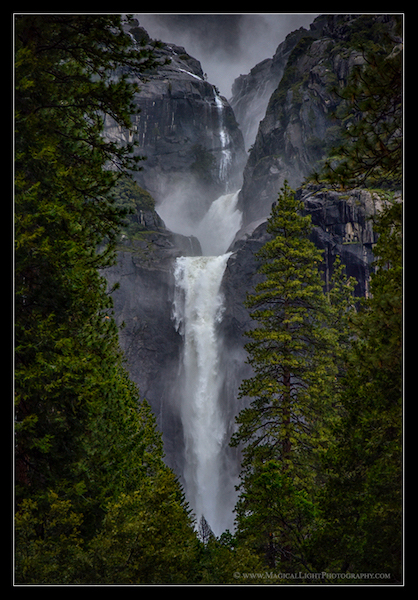 The theme here is 'water' and thus in the third slideshow photo we see a view of the rapidly-flowing Merced River encroaching upon trees and shrubs in its path, followed by the majestic Cathedral Spire and Rocks as viewed from flooded Leidig Meadow.

Taking the valley loop we come, again to the ADA-accessible path to the base of Lower Yosemite Fall.  The view here allows the grand height and majesty to be seen in full. 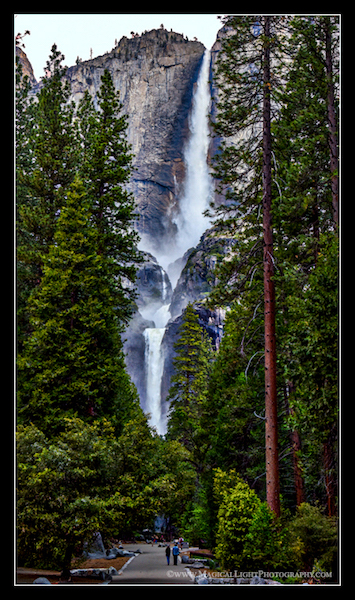 We arrived to a grand sky at Tunnel View as seen in the fourth slideshow photo which then gave way to grey clouds in the back country and which seemed to form a 'heavenly bridge' between El Capitan and Cathedral Rocks with Half Dome in the middle (in the fifth slideshow photo).  Wonderful to behold! 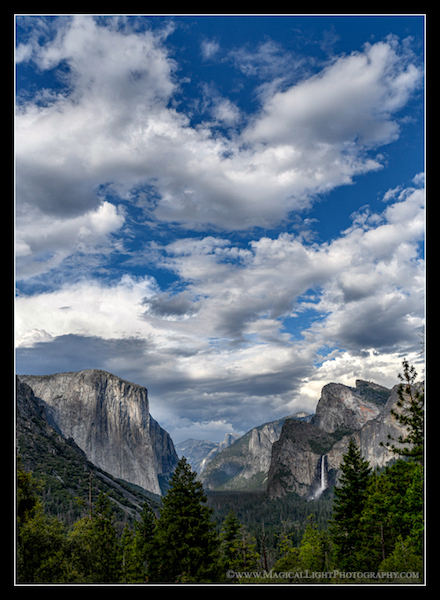 Finally, in the sixth slideshow photo, one of the hundreds of happy campers that inhabit our pond and who could not be happier with this wet state of affairs!

Great pix, Chuck! So nice to see clear air there, and the clouds in that 2nd to last slide had me wondering how many airlines altered their route to give it wide berth. Thanks for sharing.

So so beautiful. We must work to preserve our open spaces in nature! Lovely pics.

Pictures worthy of framing. Enter in some photo contests. Thanks for sharing the beauty.

Hope you didn't get any poison oak.

Stunning, every picture. Thank you for sharing.

Speaking of snide... LOL. I

Have y'all ever thought about

Achoo, his mask flip flop was

Edney, that is exactly why

Why give the orange moron any

I'm a strong Dem after my

Pfizer ended my fear and