Scroll through for photos (by an edhat reader)

Today, at approximately 9:20 am, officers responded to a call of suspicious circumstances located at a residence in the 200 block of West Victoria Street, which was the scene of a homicide two days prior.

Officers learned that a subject(s) may have entered into the crime scene and were perhaps currently inside the residence.

Due to the nature of the homicide which involved the discharge of a firearm, the Santa Barbara Police Department elected to utilize the Special Weapons and Tactics team to make entry to check for potential subjects. Announcements were made in both Spanish and English before officers attempted to enter the residence. After repeated attempts to contact any potential subjects inside the dwelling, with no response, officers made entry into the apartment.

No one was located inside the residence and the scene was re-secured. No further details are available at this time as this is still an active murder investigation.

Santa Barbara Police have blocked off the 200 block of W. Victoria and De La Vina Streets on Wednesday morning.

Edhat readers located in the area of are reporting that Police are advising residents to stay indoors and not to come out.

At 11:35 a.m., the Santa Barbara Police Department issued a statement saying they are involved in a tactical situation near the area of De La Vina and Victoria Streets. "The safety of citizens is a primary concern, and we ask that people stay out of the area on an abundance of caution," wrote Public Engagement Manager Anthony Wagner.

Scanner traffic reports a SWAT team is in the area for a search warrant, which is most likely connected to the shooting that took place on New Years Day that killed one person and injured another, although this has yet to be confirmed.

If you're in the area or have a report on this incident, send it to [email protected] 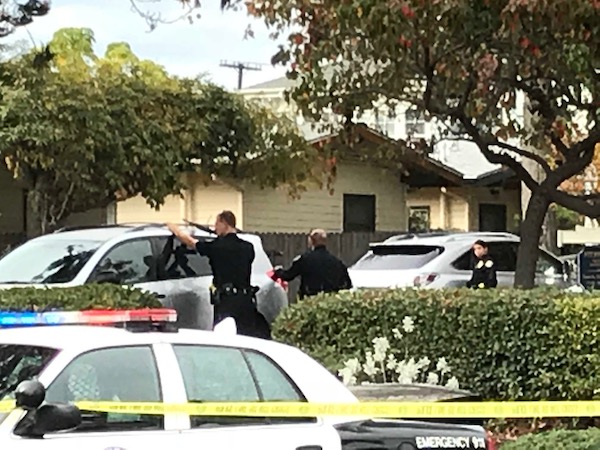 Santa Barbara Police in the 200 Block of West Victoria, a perimeter set up on a residence.

Only 24 ICU beds left across

We need a Shelter in Place

Thanks! The only problem is

Just because you didn't

Cats just get stuck up trees

BUCKWHEAT. Yeah. That is