Guest arriving at The Hilton Santa Barbara Beachfront Resort were greeted by a welcome of everything Veterans hold dear, from historic military vehicles parked at the entrance to bag piper’s playing as cordial volunteers were doing guest check-in. Lt. John Blankenship, USN (former), and Hazel Blankenship, wife of the late Pierre Claeyssens who founded the Military Ball in 1996, were cordially greeting guests during the lively cocktail reception.

Posting of the colors by UC Santa Barbara’s ROTC Surfrider Battalion, Pledge of Allegiance by Lt.Col. Patricia Rumpza, National Anthem lead by David Gonzales, invocation by LTC Jack Armstrong, U.S. Army (ret), The Missing Man Ceremony, Francis Gary Powers, Jr. presentation, Armed Services Musical Tribute along with an outstanding dinner was followed by dancing to music by The Replicas, who have been the preferred entertainment for organizations such as NASA, Google, LinkedIn, GM, Ford, AppFolio, UBS Bank, and Milken Institute, to name a few were fantastic and had everyone out on the dance floor. 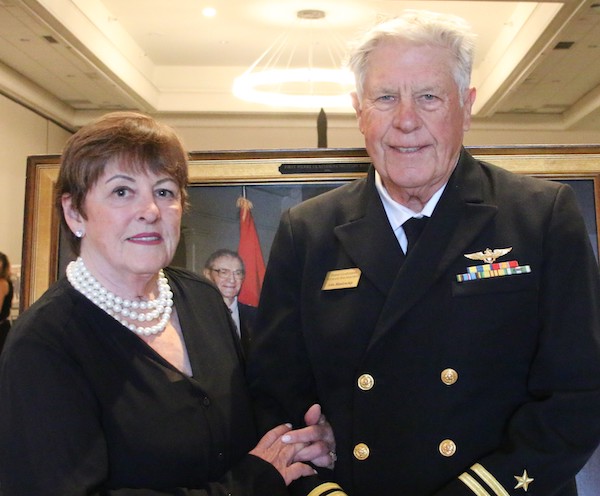 The Missing Man Ceremony, a poignant honor to America’s POW/MIAs, was given by Nick Lizarraga of UCSB ROTC Surfrider Battalion and is always included at the ball as a very touching toast and reminder of those captured and missing in a foreign land. The empty table is always prepared for this toast and is an important inclusion at every Pierre Claeyssens Military Ball.

Francis Gary Powers Jr., guest speaker for this year’s Ball, is known for his bestselling non-fiction books, Letters from a Soviet Prison (2017) and Spy Pilot (2019) which both have helped to dispel the misinformation surrounding the U-2 Incident, and his consulting work on Bridge of Spies directed by Steven Spielberg and starring Tom Hanks and founder of the Cold War Museum. Mr. Powers, is the son of Air Force veteran Francis Gary Powers Sr. - an American CIA U-2 spy plane pilot shot down over the Soviet Union on May 1, 1960, imprisoned and the subject of a spy exchange. The event triggered a major international political and diplomatic incident.

Powers’ work is aligned with the PCVF mission, which is, based on the words of Pierre Claeyssens: “To be killed in a war is not the worst that can happen. To be lost is not the worst. To be forgotten is the worst.”  Powers says, “The whole purpose of the Cold War Museum, and what I've been doing to honor veterans and preserve history, is that I don't want the Cold War veteran to be forgotten or overlooked. We must embrace all of our veterans, from the Revolutionary War to the present. We need to honor them, respect them and thank them for their service. We must make sure that our children understand the important job that they do so that we're free at home.”

The formal Military Ball, now in its 24th year, provided a long-awaited opportunity for attendees to connect and celebrate. COVID-19 protocols were in place to create the safest possible environment for guests, and all in attendance had to show proof of vaccination or supply a negative Covid-19 medical test result (taken within 72 hours of the Military Ball), along with an official photo ID, before entering. Mask were required indoors but everyone was happy to comply.

The Hilton Santa Barbara Beachfront Resort took extra precautions for the health and safety of staff and guests. Higher value MERV 13 filters specifically designed to eliminate circulation of airborne microbes in the hotel were installed to kill airborne microbes in the duct work before reaching the general air supply, and the system has been re-programed to inject 100% fresh air while eliminating recirculation of inside air.

About Pierre Claeyssens Veterans Foundation
Pierre Claeyssens Veterans Foundation is committed to honoring the men and women who have served in U.S. military efforts. PCVF does this by supporting veterans and active duty members, and related partner organizations, in Santa Barbara and Ventura counties as well as preserving military history and legacy. The Foundation works to uphold Pierre Claeyssens’s vision that those who have served are “Never Forgotten.” PCVF is funded entirely by private donations. For more information, visit www.pcvf.org or call (805) 259-4394.

“To be killed in a war is not the worst that can happen. To be lost is not the worst. To be forgotten is the worst.” What a silly rationalization for man's cruelty and violence toward one another. Ritual is not substitute for life.

What a classless comment directed at a wonderful organisation and event. Honouring those that have served (regardless of how/why they were lost or killed) shows compassion and heart.

When I saw the title of this article, I knew there would be some anti-veteran/military BS comment. Sure enough... Thanks anonymous 8:21 for showing your blatant ignorance!