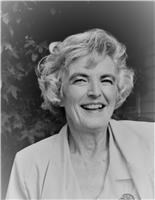 A Santa Barbara resident for 55 years, and a Caspar Community resident for her last16 years,  Phyllis Dickson passed away at the age of 94, on Aug 20, 2021.

She was born in Elgin, Illinois and was the first daughter of Edwin and Pauline Webster. She loved to read and was an excellent student which allowed her to skip a grade in elementary school. Her father, a metallurgical engineer, took a job with Lockheed Corporation, so the family moved to Glendale, CA. It was there that Phyllis attended Hoover High School and where she graduated at the age of 16. Four years later, Phyllis graduated from the University of California at Los Angeles with a degree in Psychology. At UCLA, she was a member of the Alpha Phi sorority.

After graduation, she was recommended for a job at UC Berkeley in the new field of psychometric statistics (measuring skills, personality, knowledge and aptitude) but she elected to stay at UCLA, and participate in developing a Master's Degree program for Physical Therapy. While on ski-vacation at Mt. Hood, Oregon, Phyllis met Dr. Delbert Dickson. They married in 1948. The couple soon settled in Santa Barbara, California where Phyllis then lived the majority of her life. She had 4 children - Pamela (now in San Diego, CA), Deborah (now in Seal Beach, CA), Daniel (now in Mendocino, CA), and Brian (now in Sonoma, CA) In addition to being a mother to her 4 children, Phyllis was also mother-in-law to 4 (Tom, Gene, Karen and Bettina), a grandmother to 8 (Whitney, Taylor, Janelle, Gwen, Kira, Tessa, Leo and Archie) and a great-grandmother to 3 (Evan, Piper and Isla).

Traveling the world was an interest that Phyllis inherited from her mother and she was totally hooked after trips to Europe and Russia in 1966. After her children were grown, Phyllis took on the world, traveling to non-traditional places in Africa, Asia and South America. This led her to starting her own travel agency, One Stop Travel in Santa Barbara, that she owned and operated for 8 years. There she was able to share her passion for world travel. She loved to learn about foreign countries and hosted many foreign exchange students.

Phyllis used her skills to benefit a host of local charities and was involved in many fund-raising campaigns for the American Cancer Society. She was also an active member of the Santa Barbara Botanical Society and the First Presbyterian Church. In 2005, she moved to Northern California to settle in Caspar. Phyllis loved the community along the coast – she attended Mendocino Presbyterian Church, volunteered at the Botanical Gardens, and you could often find her at the Caspar Community Center for events and cooking classes.

As a youth, Phyllis played both cello and viola and as an adult, she enjoyed watercolor painting, snow skiing, and weaving rugs on her own room-size loom. She was an animal lover and some of her greatest joy came from the many dogs and cats she had over the years. Her extended family and all friends in Santa Barbara, Caspar, and Mendocino will truly miss Phyllis Dickson, and her constant kindness, positivity and community involvement.

A private memorial will be held under her redwood tree at 'A Better Place Forest' in Pt. Arena, on Aug 20, 2022.

Edhat has had that problem

"College kids need to go back

The dorms literally do not

The dorms literally do not