On Monday, May 14 at 6:00 PM, the California State Lands Commission held a packed town hall meeting at the Goleta City Hall on the decommissioning process for Platform Holly, the offshore oil platform near Ellwood and UCSB, as well as pier 421, the oil platform on Haskell's beach, and the Ellwood Onshore Facility (EOF), the oil processing plant near the Bacara.

Prior to the meeting, opponents of offshore oil held a rally outside calling for a transition from fossil fuels to clean energy and pointing out that California's continued oil production conflicts with the state's leadership on climate change. Emily Williams with Santa Barbara 350.org called oil, "so last decade," and Kristen Monsell with Center for Biological Diversity pointed out that California oil is particularly bad, "three-quarters of California oil is worse than Canadian tarsands oil for the climate." She also pointed to study that found that for each barrel reduction of California oil, global production and use would be reduced by about half a barrel. Goleta City Council Member Kyle Richards spoke about local progress reducing reliance on fossil fuels, including setting a goal of 100% renewable energy by 2030, LED street-lighting and a new Master Bike Plan. 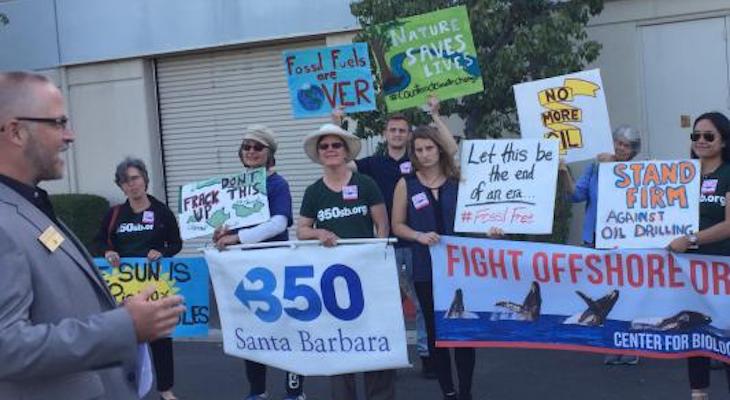 Inside the town hall, State Lands Commission staff from Sacramento, Jennifer Lucchesi, Jeff Planck and Seth Blackman, explained the decommissioning and oil well abandonment process and responded thoughtfully and at length to extensive questions from the audience. The format was appreciated. Linda Kropp, Lead Attorney with EDC commented, "I've never been to a public meeting with this format, and I love it."

Platform Holly has been shut down ever since the May 2015 Plains Pipeline oil spill in which 140,000 gallons of crude oil was spilled onto the beach and waters near Refugio beach. Venoco, which operated the platform, went bankrupt in 2017. California State Lands stepped in to the breach, securing a $108 million in the government funding for management of Platform Holly as well as Rincon Island in Ventura County, which was in a similar state of abandonment. They quickly contracted with Beacon West, made up of former Venoco employees, to ensure continued oversight and management of Platform Holly and to protect the public from accidental releases of oil and poisonous hydrogen sulfide gas. "Things that sit out in the ocean tend to rot," explained technical lead, Jeff Planck as to why careful and prompt attention is essential. 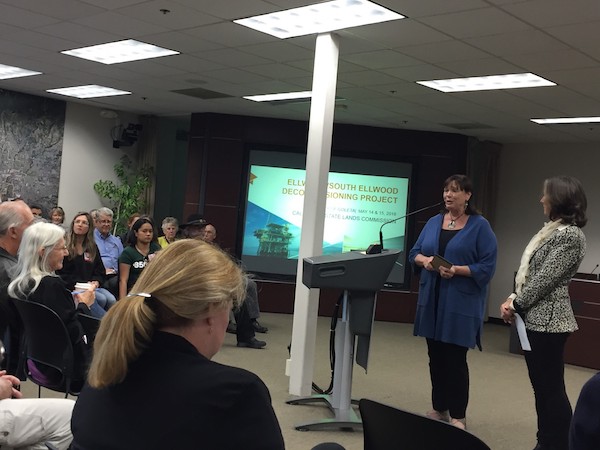 Venoco will be liquidated soon and all assets dispersed. State Lands has negotiated with Exxon, which as the prior owner of Venoco's Goleta assets maintains liability, to plug and abandon the wells. They plan to plug the pier 421 wells on the beach by the end of 2018 and the 30 wells at Platform Holly in 2019. Costs to fully decommission these wells are estimated to be in the range of $348 million, far more than Venoco's $22 million bond. They will need to reduce the pressure first by pulling fluids from the wells, processing at the EOF and trucking it out. The ultimate fate of the EOF, which is in the City of Goleta, is unclear. State Lands is considering whether to lease it, take ownership of it, or condemn the property. Remediation is likely to be costly, though as it is on the coast and zoned for recreation, so perhaps could eventually be put to beneficial use.

State Lands staff answered many questions from the standing-room crowd. They explained what they were doing to protect state taxpayers from having to pay to abandon the other offshore platforms in state waters. They noted that they sent an 18-page letter opposing the Trump administration plans to open up new leases in federal waters. They said they have not yet tested the potential toxic shell mounds at the base of the platform or decided whether to remove the entire platform or not. Those options, they explained, will be explored in a forthcoming environmental report. They also reassured concerned Goleta residents that they are committed to continued monitoring for hydrogen sulfide releases. The oil operations in our area produce "sour gas" which has a very high concentration of hydrogen sulfide, which causes noxious odors and low levels and is deadly at high levels. This makes safe operations and monitoring all the more critical.