Robert Ward's Pulitzer Prize-winning opera will premiere at the Lobero Theatre on Friday, April 26 and Sunday, April 28 directed by Stephanie Havey under conductor and artistic director Kostis Protopapas. More than 500 middle and high-school age students will attend the third performance on Monday, April 29 for free.

The Crucible is a classic American drama written as an allegory for McCarthyism and the US Government’s persecution of suspected communists. It is a story of a community confronting mass hysteria and dangerous ideology and the repercussions and costs of reputation and integrity.

Founded in 1994 by Marilyn Gilbert and Nathan Rundlett, Opera Santa Barbara has continued to present opera productions and educational programs to the Santa Barbara community. The company has staged more than 70 operas and incorporated thousands of hours to community outreach. The local non-profit organization aims to celebrate the beauty of opera and contribute to Santa Barbara's cultural enrichment. More information about Opera Santa Barbara can be found at www.operasb.org. 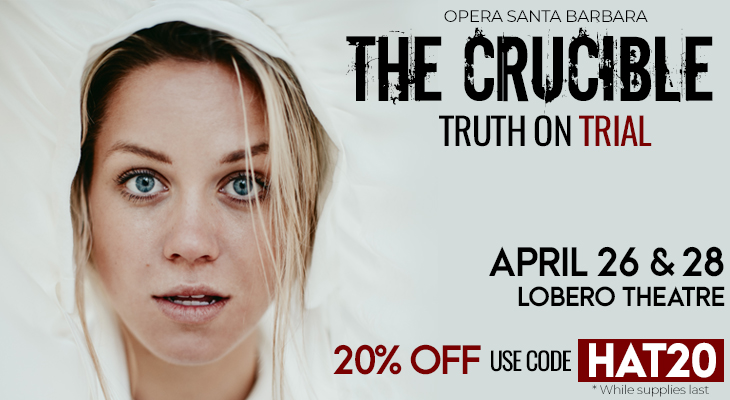 Sad the way some are so

BABYCAKES - where did I say

Teaming Up for Schools

I'm a bit puzzled about why

By doing what? Tweeting at

LOL at the downvote. I

Babycakes - can you please

I don't really think Trump is

Trickle Down Economics. I

SacJon: No matter how anyone