Upon arrival crews discovered one of the vehicles was an oil tanker fully loaded with crude oil. The tanker was on its side and in a ditch with the cab of the tanker fully involved in fire that spread to nearby trees and brush. The driver was able to self extricate and did not sustain any injuries.

Crews knocked down the cab fire and called in additional resources to attack the quarter-acre brush fire in a eucalyptus grove. The fire did not impact the oil in the trailer and the Santa Barbara County Fire Department reports.

Approximately a 1/2 gallon of leaked oil has been contained and heavy mop-up continues in the vegetation, reports SBCFD.

Crews are also preparing for the eventual transfer of 6,000 gallons of crude oil to a new truck.

The driver of the other vehicle sustained moderate injuries and was transported to a local hospital.

The incident is under investigation. 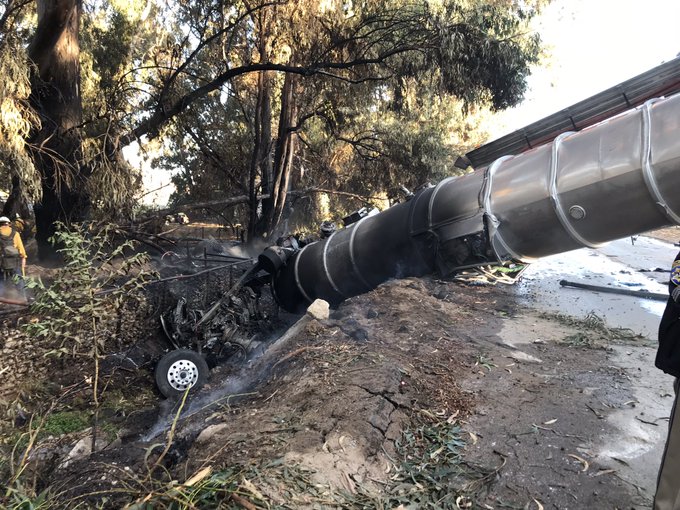 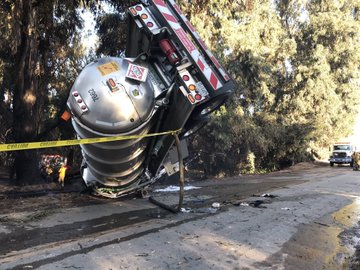 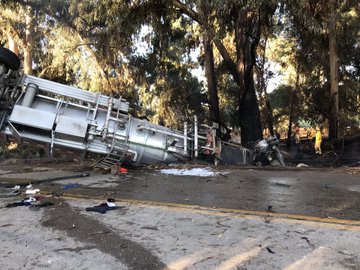 Came across this article today about pipelines and spills and CA oil production.
It has basic numbers in it and a discussion about the aging infrastructure.

A pipeline transporting oil from offshore platforms spilled at least 126,000 gallons of oil in Southern California, the state’s largest such leak since 2015."

I feel that the coastal oil suppliers, especially SB County and adjoining areas, have given enough.
Seems oil shale and associated pipelines have had somewhat less effect and more profit.

Caution: I drive a gas-powered car a hundred or so miles a year and have home solar power and grey water and rain storage. I don't support fracking of shale. I support the Indigenous communities that fight against pipelines and uranium mining (Grand Canyon areas).

I do believe an argument can be made that our area has carried our share of damage and have other resources that outweigh the continuing pursuit of oil off our shores.

Hey Now! I am taking my car for an oil change, and the top of the engine has some leaks (of oil). It consumes a bit of oil. My opinion, the oil is sick. Tesla here I come!! My best to all my great dudes on Edhat. Let's stop the oil leeks!!

Wow, what timing! Let's open the pipeline and keep the hauling trucks off the roads.

4:28 - Better yet, let's stop the whole operation. We've had graphic demonstrations in the last week that neither trucking nor pipeline is safe.

If the Exxon Mobil proposal is approved, the odds are short this type of oil tanker accident will happen again, and not inland, but along our coast. Compute 70 full tanker trucks/day from Los Flores Cyn to Kern County processing plant x 365 days/year x 7 years =178,500 trips. Note the public agencies that responded today to the oil tanker crash and fire near Sisquoc: Santa Barbara County and Santa Maria City Fire Departments. The spilling of an oil tanker's load will require even more taxpayer funded resources to help clean up their mess, including the potential cost of injuries, fatalities, and environmental damage. As the Refugio and Huntington Beach pipeline spills reveal, don't count on a prompt response by the oil industry, nor their ability to cover the total costs of their accidents.

While were are still consuming oil/gas here locally, where is an acceptable location to source this from? If not our backyard, whose? Whose backyard shall we procure the oil that we still use locally?

2:01 - Still can't get away from whatabouting everything, eh?

VOR- A responsibly planned and maintained pipeline is possible and uses way less energy (pollution) to pump the product than trucks use. The former would require an industry that is committed to safety and regulatory agencies that would hammer the law through.... Yeah, a pipe dream, what am I smokin'?

But while we still using and consuming oil products, as we transition to greener electric sources, where shall procure the oil we continue to use? If not our backyard, whose? How far do we the transport the commodity using gas burning ships, trains and tanker trucks to get it to us? Are the environmental regulations where we source it from more lenient than we have here?

The grid is a crazy thing. We actually can move energy over quite large distances, with no trucks involved! And believe it or not, there are energy sources that aren't so worrisome to have in your backyard. Some even can go on your roof, so your yard can have a patio set... nice!

As for the "greening of the grid", I have said before it's not easy... at all, and environmentalists (like me) need to be more transparent about just how hard it is. That's all pretty oblique to the debate on this inane trucking plan... look at the accident history. This morning is no "rare" event, nor is the spill we just had in Huntington Beach. There's NIMBYism for sure (as you point out), but there's also common sense and analysis in context.

Who are folks we need to lean on to say "NO" to this crazy oil-trucking expansion plan?

Planning Commission already said no. If you care about the issue, you can follow it on local news and contact local politicians.

Yes, pitmix. And besides a fire a ruptured tank would entail considerable cleanup. Trucking this stuff is nuts.

Exhibit 1 of the Prosecution's case about why Exxon should not be given a permit to truck their oil. Just lucky that the tank didn't rupture and cause a major fire.