In February, Exxon will begin plugging two wells at Haskell’s Beach in Goleta, remnants of the 1930s Ellwood Oil Field. The piers and caissons will be removed after the wells have been plugged. Platform Holly can be seen on the right (Photo by Melinda Burns)

Fifty years after the Jan. 28, 1969 oil spill in the Santa Barbara Channel, the region is on the verge of another upheaval – the wholesale removal of aging oil infrastructure.

Seven platforms out of 19 in the Channel have shut down operations and will likely be removed, starting in the 2020s, together with their piers, pipelines and onshore processing plants in Carpinteria, Goleta and Gaviota.

The oil companies themselves will bear most of the cost, billions of dollars overall. At the same time, the state Legislature has been forced to budget tens of millions because former owners have disappeared into history or declared bankruptcy.

The first task at hand is to plug dozens of offshore oil wells with cement, an expensive and time-consuming task.

This year off Summerland, the State Lands Commission will be working on “legacy” oil wells that were drilled in the late 1890s and are leaking oil onto the beach.

Off the Rincon this winter, Chevron Corp. will begin plugging wells at platforms Gail and Grace. And off Goleta, ExxonMobil will start plugging two wells in the surf zone at Haskell’s Beach, and 30 offshore wells at Platform Holly, starting in February and April, respectively.

“It’s an unusually happy moment to see change,” said Anne Wells, planning manager for the City of Goleta. “It’s something our entire community is witnessing. We’re moving in the direction of a coastline that’s free of our 1930 oil and gas history, into a new era of a natural coastline. I have to pinch myself.” 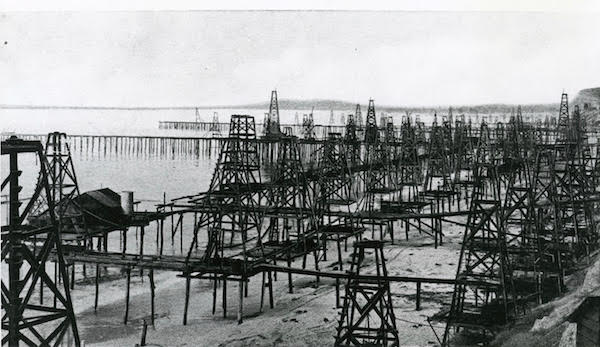 Summerland Beach in 1898 was the site of the first offshore oil development in the U.S. An estimated 400 wells were drilled there. Today, some of these “legacy” wells are leaking onto the beach. (Photo courtesy of the Santa Barbara Historical Museum)

Platform Holly, installed in state waters two miles off Goleta in 1966, is slated to be decommissioned within five to seven years, state reports show; no platform of comparable size has ever been removed on the Pacific Coast. And at least six more offshore oil platforms – Harvest, Hidalgo, and Hermoso off Pt. Conception, Habitat off Carpinteria, and Grace and Gail off the Rincon and Ventura County – may be removed around the same time. These platforms range in age from 32 (Gail) to 53 years old (Holly).

“Oil’s been here for a long, long time,” said Fred Shaw, a Carpinteria councilman who remembers the spill of 1969. “We’re used to looking at the rigs, but wouldn’t it be nice if they went away? The majority of the town would just prefer that that oil development wasn’t here.”

Decommissioning, though, will be a gargantuan task. The platforms were installed in water hundreds of feet deep, they weigh thousands of tons, and onshore disposal options are limited. The question of whether to leave the platform legs in place underwater – the “rigs-to-reefs” option – will have to be hashed out during environmental review.

Bringing a specialized vessel to the channel from Asia or the Gulf of Mexico to lift the platforms out of the water is a daunting proposition. The state estimates that the mobilization alone will cost operators between $11 million and $49 million before the vessel even begins work. Multiple operators may want to piggyback and reduce their costs.

“We could be looking at some fairly significant removals,” said John Zorovich, deputy director of county planning in the energy, minerals and compliance division. “I think that’s the direction we’ll probably be going in the next 10 to 15 years.” 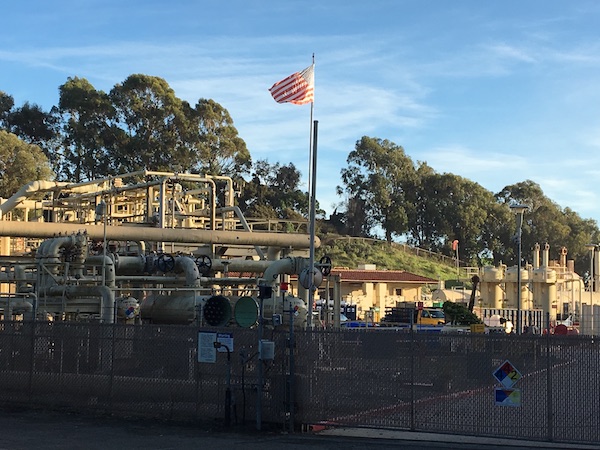 In the wake of Venoco’s bankruptcy, the State Lands Commission is operating the onshore processing plant near Haskell’s Beach so that Exxon can safely plug the offshore wells at Platform Holly. The state estimates it will cost $83 million to run the plant for three years (Photo by Melinda Burns)

For residents such as Nora McNeely Hurley, it’s about time. From her home on the bluffs above Summerland Beach, she can see oil leaking into the surf zone from the legacy, or “orphaned,” wells that were abandoned after more the drilling frenzy of more than a century ago.

“You see dolphins and whales and birds, and people in and out of the water,” Hurley said. “Little do they know how polluted it is. Directly out from our house are two wells leaking that deliver an iridescent film over the beach. It kills me it’s been going on for such a long time.”

Last year, at a cost of $1.2 million, State Lands plugged a legacy well that was spewing globs of black oil onto the sand. The two leaks that Hurley spotted had first been observed in 2016, and now they’re visible again. A stench of oil hangs in the air.

Because of the complexities of plugging legacy wells, it may be possible to work on only one per year, said Sheri Pemberton, a spokeswoman for State Lands. The agency also needs to conduct a geophysical study off Summerland Beach, she said.

“There are seeps along that stretch of coast that may become more active as we plug and abandon leaking wells,” Pemberton said. “We are committed to doing our best to ensure that oil on the beach is not coming from a legacy well.”

In Goleta, the two wells on Haskell’s Beach near the Ritz-Carlton Bacara are remnants of the Ellwood Oil Field from the 1930s, before drilling at the water’s edge was banned. After these wells are plugged, Exxon will remove the rusting rectangular caissons around the wellheads.

“The day they actually start demo-ing down the caisson walls is going to be a big day for celebration for this community and beyond,” said Wells, Goleta’s planning manager. “These wells are right in the surf zone, and we saw what happened in Summerland.” 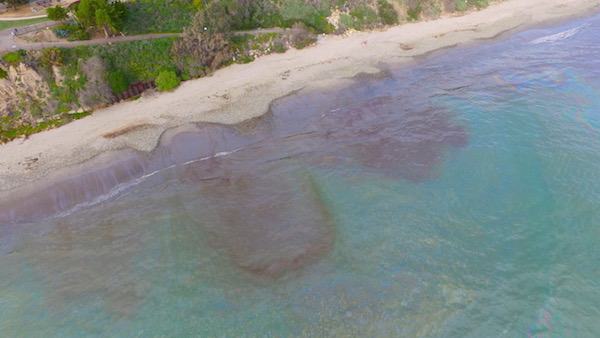 Two leaking “legacy” wells from the 1890s are polluting the surf zone at Summerland Beach near the path to Lookout Park. This photo was taken in 2016; the leaks have recently reappeared (Photo by Harry Rabin)

According to a Jan. 10 State Lands report to the Legislature, Exxon expects to spend as much as $350 million to plug 32 wells and remove Platform Holly. Plugging the offshore wells, one at a time, will take up to three years, and the platform cannot be removed until that work is finished.

Exxon sold Platform Holly to Venoco Inc. in 1997. But in 2017, two years after the Refugio oil spill, Venoco declared bankruptcy and quitclaimed its offshore leases to the state, leaving behind a meager $22 million bond for decommissioning. A break in the Plains All American Pipeline, which transported Venoco’s crude to refineries, had caused the spill, dumping 140,000 gallons of crude into the ocean at Refugio Beach. The pipeline remains shut down.

“Venoco walked away,” said Linda Krop, chief counsel at the Environmental Defense Center, a Santa Barbara-based nonprofit group. “Now they’re leaving us and other oil companies to clean up their mess.”

Onshore, Exxon contends it is not liable for removing Venoco’s former oil and gas processing plant at Haskell’s Beach. Negotiations are ongoing; the state’s position is that the company has the responsibility to assume nearly all the costs related to the decommissioning work.

But taxpayers are already shouldering some of the expense. Under an agreement with the bankruptcy court, the state report says, State Lands is operating the onshore plant and Platform Holly at a cost of $1.2 million per month so that Exxon can safely plug the platform wells. Without somewhere to ship the oil and gas, the pressure in those wells would build up dangerously.

State Lands estimates it will cost up to $83 million to keep the plant and Platform Holly running for three years. That’s equivalent to half the $160 million in revenues from royalties and rents that Venoco generated for the state there.

Goleta Mayor Paula Perotte is hoping her city will someday be able to create a park on the four acres where the former Venoco plant stands, a stone’s throw from Haskell’s Beach.

“That’s the goal,” Perotte said. “It would be the city’s first park on the beach. We all want that facility to be gone.”

Venoco’s bankruptcy also included platforms Gail and Grace, which lie in federal waters; and the Carpinteria Oil & Gas Plant. The plant is located on 55 acres on the Carpinteria Bluffs near a nature preserve, overlooking a harbor seal rookery.

Chevron, the company that sold the project to Venoco in 1999, has assumed responsibility for both onshore and offshore decommissioning. Looking ahead, the City of Carpinteria is considering whether to rezone the blufftop property for a park.

“A lot of us would hope that somehow we could acquire that space, which is really desirable, and create a parklike atmosphere along there,” Councilman Shaw said. 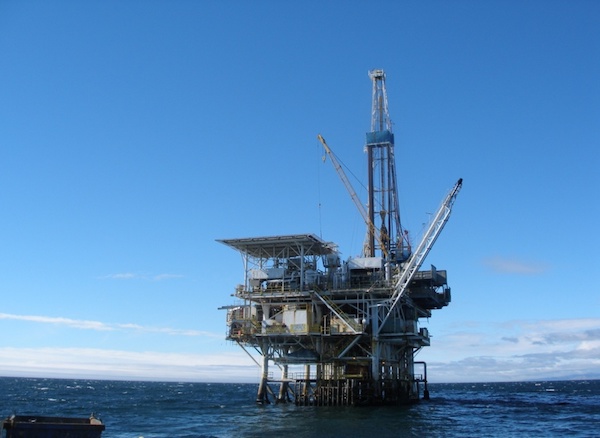 Platform Holly, shown here in an undated photo, was installed in state waters off Goleta more than 50 years ago. It will be decommissioned in five to seven years. No platform of comparable size has ever been removed on the Pacific Coast (Photo courtesy of the State Lands Commission)

A 19th century bill comes due

Just up the coast in Summerland, no oil company can be held liable for the offshore legacy wells that are leaking onto the beach. The wildcatters that stampeded the area in the late 1890s are long gone. In a kind of Gold Rush for oil, they erected the first offshore oil development in the United States – 14 wooden drilling piers and 400 shallow wells – and abandoned the mess after a big storm in 1902.

In a 2018 report to the Legislature, State Lands estimates there are 200 “high priority legacy oil and gas wells that could, depending on their condition, leak oil into the marine environment …” Of these, 192 are off Summerland and eight are off Goleta, near Haskell’s Beach.

In 2017, the Legislature authorized $20 million through 2028 to identify and plug legacy wells and remove coastal hazards, including old steel pilings and jetties.

“We may not ever be able to cap all of the legacy wells,” Jackson said last week. “They’re all inexcusable, but some are creating greater problems close to shore. The bill for the last hundred years is finally coming due, and it is sadly not being paid by those who have defiled the landscape, the seascape and the coast. It will be paid by taxpayers.”

How about some computer wifi

Totally agree with this. I