The Australian Flame Tree has one of the most dazzling floral displays. In a dry summer and early fall, it is a spectacular sight when its branches are completely bare of leaves but are completely covered by brilliantly red flowers. In fact, the word “flame” in the name refers to its canopy of scarlet flowers - the tree looks on fire! 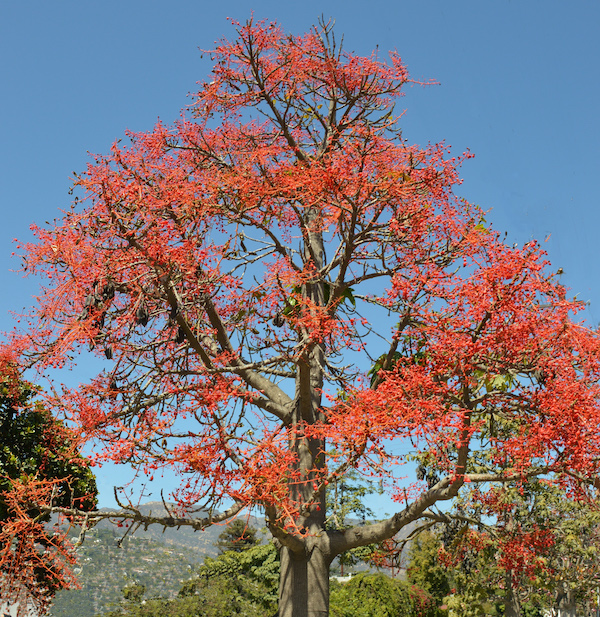 This striking tree was introduced into California in 1859. There were large specimens standing in Santa Barbara when Dr. Francesco Franceschi, a pioneering horticulturist, listed them in his 1895 inventory of trees growing the County.

With our erratic local weather patterns, this tree often gets quite “confused”, resulting in its usual growth pattern (leaf dormancy combined with flower bearing) becoming confused as well. It can be entirely in leaf and entirely in flower at the same time. Alternatively, it can lose leaves on a just portion of the branches but produce flowers sporadically around the crown. In any pattern, it is beautiful. 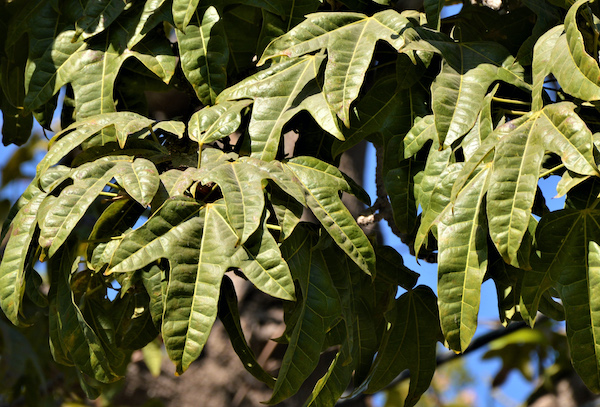 The bell-shaped flowers (up to 1-inch long and wide) have five petals, which are fused together but which curve outward at the ends to form a star shape. The flowers are produced on panicles (up to 16-inches long), which are also bright red; the longest panicles can each bear over 40 flowers.  Each flower is “perfect”, meaning it has both male and female reproductive parts inside.

After the flowers are pollinated, boat-shaped seed pods (4- to 5-inch-long) form in large numbers. The green- to greenish-brown pods (that turn gray with age) are smooth and leathery on the outside; these split open lengthwise to reveal comb-like rows of encapsulated yellow seeds that resemble kernels of corn. The seeds are edible and nutritious, containing 18% protein and 25% fat, with high levels of zinc and magnesium, Warning:  Gloves should always be worn when harvesting them, because tiny hairs surrounding and protecting the seeds can be irritating to the skin. 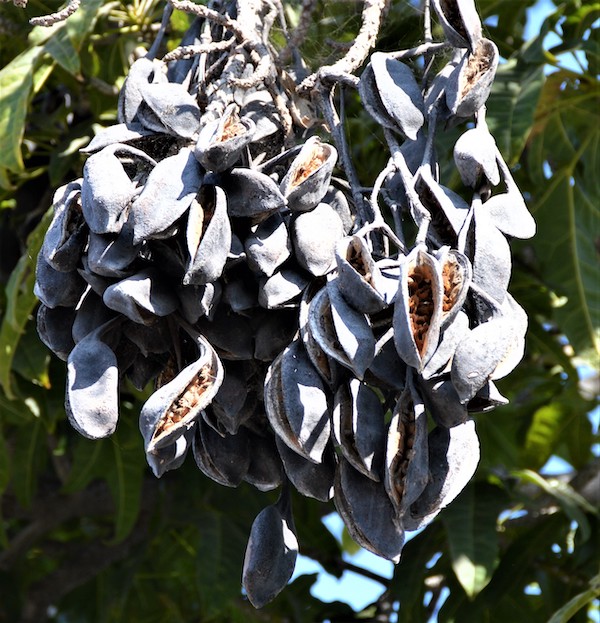 The Australian Flame Tree grows slowly, reaching up to 40 feet tall with a relatively narrow canopy spread of up to 20 feet.  When young, its crown is pyramid shaped; as it matures, this changes into an oval shape. Its slender size at maturity makes it an excellent choice for use as a street tree or for use in narrow planting spaces. Its straight trunk does not have a noticeable bulge at the base, which appears on “bottle trees” in the same genus. Its bark is gray to grayish brown, with shallow vertical fissures that often develop an attractive lacy pattern. 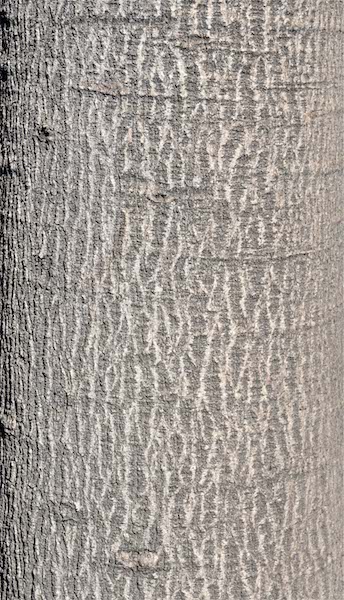 Its glossy green leaves are the largest of this tree genus, measuring up to 12 inches long and 9 inches wide.  Young leaves have a 5- to 7-lobed palmate shape (like maple leaves); when mature, these change into a 3-lobed oval or diamond shape.

The Australian Flame Tree is, not surprisingly, native to Australia, and grows in the coastal mountain rain forests of eastern Australia, from northern Queensland to southern New South Wales, from sea level up to an elevation of 3,000 feet. Indigenous Australian peoples ate the seeds (after first carefully removing the irritating hairs) either raw or roasted, as well as the nutritious roots of young trees.

Its botanical name is Brachychiton acerifolius.  The genus name, Brachychiton, is formed from the Greek words brachys, meaning “short”, and chiton, meaning “tunic”; when combined, they refer to the shape of the seed coverings. The specific epithet, acerifolius, means the leaves resemble those of maples, which are in the genus Acer.

Once established, it does well with just our normal rainfall.  It manages to grow in poor and shallow soils.  It should be planted in full sun and in areas protected from frost.  Mature trees are hardy to about 25 degrees; however, young trees can be damaged under 30 degrees.  It is quite a self-sustaining tree, which requires little maintenance.  It has a reasonably well-behaved root system.  It can be easily propagated from seeds, from cuttings, or by grafting.

The Australian Flame Tree is commonly selected for use as street tree or for placement as a specimen tree in public parks and private gardens.  It is a lovely tree that is perfectly suited to our Mediterranean climate, even though sometimes it can be thoroughly “confused” living here.

Examples of mature Australian Flame Trees can be seen, as street trees, in several places in town: in the 700 and 800 Blocks of East Yanonali Street; in the 1,000 Block of Quinientos Street; in the 300 and 500 blocks of Garden Street (intermixed with the Pink Flame Tree, Brachychiton discolor); in the 500 block of Santa Barbara Street; and in the Australian Garden at Lotusland.

The flame tree adjacent to the visitor center is a fine example. Over the years it has flowered with, without and semi dormant with flowers and leaves scattered over the plant. It is most showy when the leaves are absent and it is in full flower.

The City of Goleta reports Measure A Funding will be used for construction projects aimed at improving bicycle and pedestrian access and safety.

A local development company announced the recent acquisition of The Waterman, a 31-room hotel, located in the Funk Zone.

The California Department of Fish and Wildlife is seeking data and comments on a proposal to list the Temblor legless lizard under the California Endangered Species Act.

Are walking stick bugs common in this area?

C.B. shares a cartoon about e-bikes and today's youth.

The Goleta Police Department will hold a DUI checkpoint on Friday, August 19, from 6:00 p.m. to 3:00 a.m. at an undisclosed location within the City of Goleta.

The Santa Barbara Zoo has received its official license from the State of California as the very first licensed outdoor preschool in the state, providing one of the most unique educational experiences available.