The Windmill Palm has found our mild Mediterranean climate to be a comfortable place in which to live and thrive. It is drought- hardy, surviving during our periods of sparse rainfall with little or no additional irrigation. It is the most cold hardy of cultivated palms, able to grow in British Columbia, in England, and in parts of Northern Europe, where it has survived temperatures of minus 10 degrees Fahrenheit!

The Windmill Palm is a single-stemmed palm and is slow-growing, at less than 6 inches per year, to reach its usual height of 40 feet.  When given more water, it will grow faster and reach heights of over 50 feet.

The trunk is generally 6- to 8-inches in diameter, but a thick layer of hairy fibers makes it appear much wider.  This course, fibrous, and brownish material (2- to 4-inches thick) is quite distinctive and is one of the best ways to identify a Windmill Palm.  The fibers, formed from old leaf sheaths, completely cover the trunk, and will persist (remain on  the trunk), until removed.

The rounded crown is made up of dark green fronds (3- to 6-feet long), which emerge from the center of the crown.  The palmate (hand-shaped) fronds are circular (2- to 4-feet in diameter) and stand at the end of long stems (2- to 3-feet long), called petioles.  Each frond is deeply serrated into 30 to 50 segments, creating a fan-like or windmill-like shape.  The fronds also persist on the trunk, unless they are pruned off.

Windmill Palms are classified as “dioecious”, since male and female flowers occur on separate trees.  However, in some instances, the male tree will produce flowers that are “hermaphroditic”, containing both male and female sexual parts, and will produce viable seeds.  Flowering occurs in June through August.  The male flowers are creamy yellow, and the female flowers are light green; both types emerge on densely branched panicles (1- to 2- feet in length), which emerge from between the fonds.  They are often inconspicuous, being partially hidden within the crown.

After flower pollination, the resulting palm fruit is a “drupe” (a single seed surrounded by a fleshy covering and a skin), which is up to ½- inch long, three-lobed, and kidney-shaped.  It is yellow and smooth when young, turning to blue-black and coarsely wrinkled when mature (August to November).  In Asia, the seeds are used in traditional medicines and are believed to be cancer-fighting. 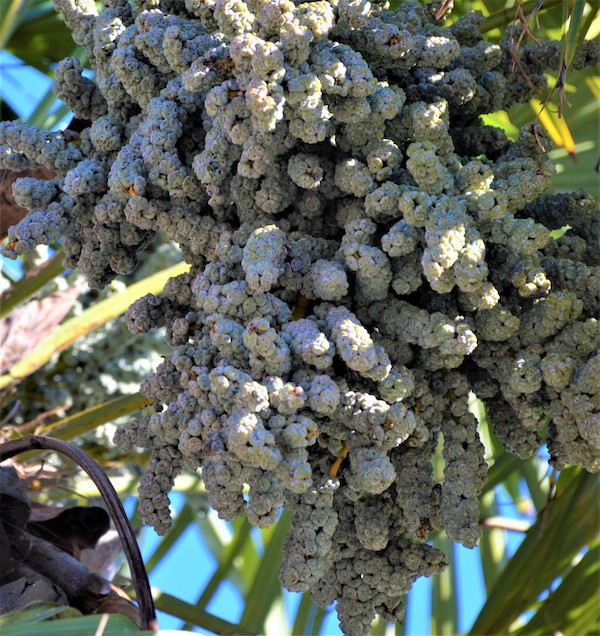 The Windmill Palm is thought to have originated in central China at elevations up to 8,000 feet, which would help explain its cold hardiness.  For centuries, it has been cultivated throughout China, Japan, and Southern Asia for its trunk fibers, which are highly valued in making extremely strong rope, netting, and cloth, so its true natural range is hard to determine and could be much larger.

This species is also known by other common names, “Chinese Windmill Palm”, “Chusan Palm”, and “Hemp Palm”.  Its botanical name is Trachycarpus fortunei.  The genus name comes from a combination of the Greek words, “trachy”, meaning rough, and “carpus”, meaning seed.  The specific epithet honors the Scottish botanist, Robert Fortune (1812-1880), who reportedly smuggled these palms out of China in 1849 and provided them to the Kew Horticultural Gardens in England, where it has been given the Royal Horticultural Society’s Award of Garden Merit.

In the landscape, the Windmill Palm can be planted as a single palm or can be installed in mass for a bolder impact.  It is often grown in groups of three or more, as a substitute for the decorative Mediterranean Fan Palm (Chamaerops humilis).  It makes a good street tree and is a lovely addition to any palm garden.

Windmill Palm grows well with full sun to partial shade.  It prefers well drained loam soil.  It can survive drought but, understandably, is much more attractive with some irrigation during the dry season.  Its seeds germinate easily - within about 3 months.  A cultivar, ‘Wagnerianus’, is a slower-growing variety that is semi-dwarf -  it reaches a maximum of only 15 feet tall and bears fronds less than 18 inches long; the smaller size makes it less susceptible to wind damage.

Many examples of mature Windmill Palms can be seen in Santa Barbara: on Haley Street from Chapala Street to Milpas Street; on the first block of North Nopal Street; on the single block of Lawrence Street; in East and West Alameda Parks; at the County Courthouse (100+year-old specimens); in the Shoreline Drive median at Harbor Way; on the campus of UCSB; and, at Our Lady of Sorrows Catholic Church (along the Anacapa Street side).

These palms are home to many birds and bees, unfortunately they are highly flammable. Not only do their trunks catch on fire, dead fronds ignite and are easily blown off of the tree. These fronds can end up 1/2 mile from the fire front throwing embers the whole way. Poor choice in fire hazard areas.

You're so wrong, neighbors have trees cleaned every 3-5 years - ok SB tree trimmer experts, give us some accurate info.

I have mine trimmed yearly. It just gets more expensive if there are more fronds to remove. It's definitely a safety issue.

BYZANTIUM is not wrong. Dead fronds need to be trimmed yearly. If your neighbors are trimming their palms every 3-5 years, they are not maintaining them properly.

Caveat: Palm trees do take $600-800 annual professional maintenance costs, depending upon their height and amount of debris. Plus dump charges, since their debris cannot go into the green waste cans.

I find about $100 per tree, but including dump fees. I have fewer than 10 palms. A long-term working relationship with an experienced, insured, valid tree company is important and allows for lower fees.
Do you too have several ? What tree company do you use?