Want to see in Santa Barbara leaf colors that rival the hardwoods of New England?  Look no further than the Chinese pistache!  An additional bonus, for the holiday season, is its fall display of bright-red, berry-like, fruits.
In late November through December, this lovely tree provides a dramatic show of brilliant red, orange and yellow leaves - best displayed when in front of other trees that wear contrasting dark green foliage.

Over winter, the Chinese pistache loses its old leaves and is briefly fully deciduous.  Starting in late March, it will once again be covered with lustrous deep-green leaves.  Its nearly year-round foliage has a distinctively fluffy gracefulness, the result of a dense canopy of pinnately-compound leaves (up to 10 inches long) with each leaf carrying 10 to 16 lance-shaped leaflets (up to 4 inches long). 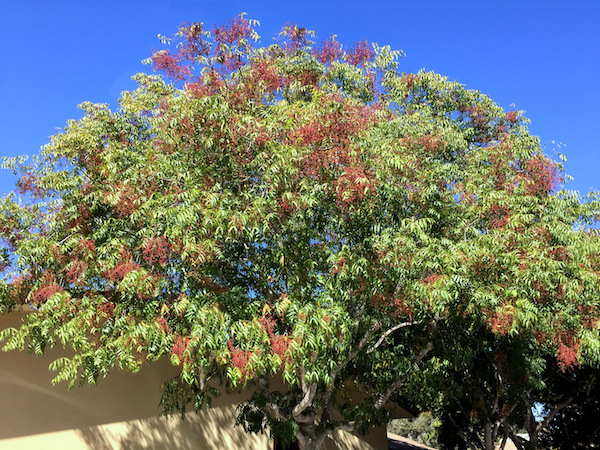 It is “dioecious”, meaning it has genders; male or female flowers form on separate trees.  In spring, on trees of either gender, rather inconspicuous reddish-yellow flowers appear in racemes (distinctive clusters) up to 6 inches in length.  From October through December, crimson-colored fruits (round drupes ¼ inch in diameter) stand out boldly on the racemes; of course, these are only borne on female trees!  Depending on a female tree’s location, the mess of fallen fruits can be a concern:  the solution is to buy and plant clones of male trees - which are commonly available in the nursery trade.

The Chinese pistache is a native of China, Taiwan and the Philippines, and is a relative of the pistachio nut tree; both are in the cashew family.  Despite this close relationship to tasty nuts, the Chinese pistache’s fruits are inedible by humans.  However, the abundant fruits are eagerly gobbled up by a great number of birds.

It is a small- to medium-sized tree with a broad spreading crown.  In our area, it grows to 30-35 feet tall and 25-30 feet wide.  When these trees are young, their branching is often open and asymmetrical; with age, they will fill in and form a symmetrical and full-rounded canopy, though this may be aided by careful pruning.  As the trees mature, they develop attractive light-gray deep-fissured bark.

The Chinese pistache is well suited to our Mediterranean climate.  It can be planted in soils ranging from alkaline to acidic.  It does require good drainage, in order to avoid root fungus problems, since it is susceptible to Verticillium wilt.  It grows best in full sun but will tolerate light shade.  Once established, it can survive heat with our normal rainfall; however, in drought years, it will appreciate and respond to deep watering in infrequent but regular intervals. 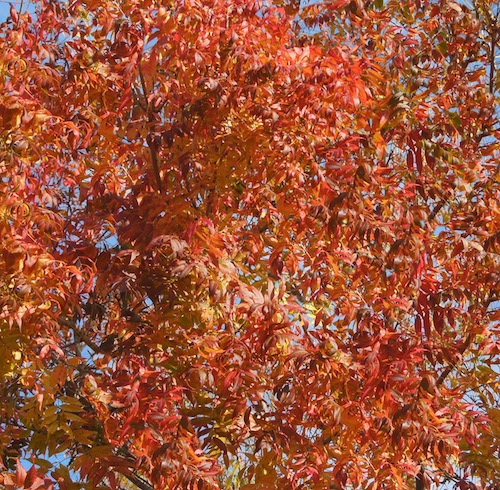 The botanical name for the Chinese pistache is Pistacia chinensis.  The genus name, “Pistacia”, is from the Greek word for the pistachio nut, “pistake”.  The specific epithet, “chinensis”, means “from China”.  In China, where the tree is prolific, the wood is used for furniture, because it is very hard and rot resistant.  The oil from its seeds is used in biofuel production.

In our area, the Chinese pistache is an excellent choice for home gardens, commercial landscapes, and street trees.  As a single specimen, it makes an outstanding focal point.  When planted in masses or in a line along streets and driveways, it always makes a brilliant display in the fall.  Its deep and well-behaved roots make it a good selection for areas with surrounding hardscape.

Mature Chinese pistache trees can be seen as street trees on Alan Road - and in Alice Keck Park Memorial Garden and lower Orpet Park. Younger street trees are found on Borton Drive, Fawn Place, the 400 block of West Padre Street, and the 1000 to 1300 blocks of Portesuello Avenue.

Thank you for a very complete description of an interesting tree. I always look forward to these identifications.

Thank you. These monthly tree identifications are interesting and fun to track down for a "look see".